"The Democratic machine has launched an unjust attack on your campaign," Stein writes to Sanders 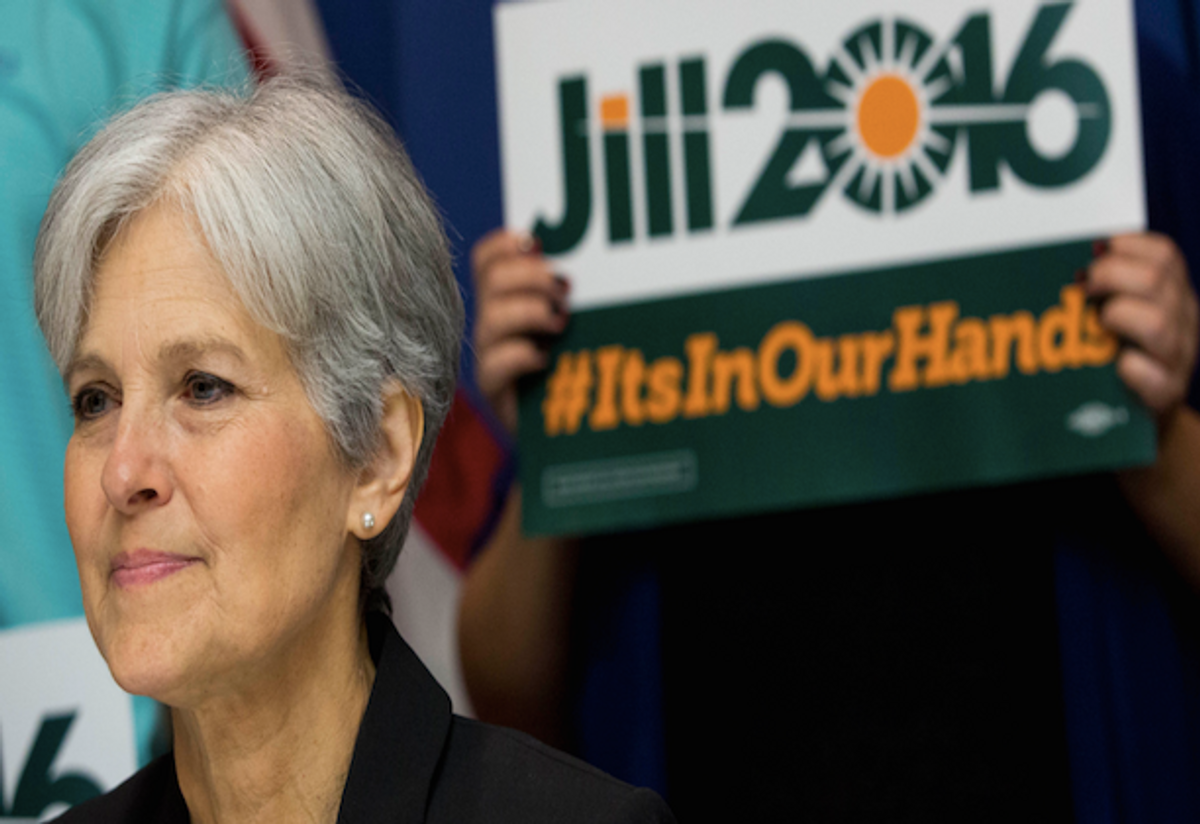 Jill Stein, the Green Party candidate for president, wrote an open letter to Bernie Sanders, asking the Independent Vermont senator to consider ditching his attempt to win the Democratic Party's presidential nomination for a real "revolution for people, planet and peace" alongside Stein.

Stein, who has long called on Sanders to join forces with her in the interest of their “shared goals,” wrote to Sanders over the weekend: "I invite you to join me in pushing the boundaries of that system to a place where revolution can truly take root."

"You've proven that in today’s rapidly changing America, a populist progressive agenda covered by the media and the televised debates can catch on like wildfire and shake the foundations of a political establishment that seemed invulnerable just a few short months ago," Stein wrote to Sanders, asking if "in this wildly unpredictable election where the old rules are giving way one by one, can we think outside the box and find new and unexpected ways to synergize beyond obsolete partisan divides?"

Stein, who first ran for the White House under the Green Party banner in 2012, argued that despite its early successes, Sanders' campaign has faltered as the "neoliberal Democratic machine mobilizes to quash revolution in its ranks":

The Democratic machine has launched an unjust attack on your campaign - from the NY Daily News hit job to Paul Krugman's unfounded assault, the DNC's efforts to minimize your debate exposure, and the near-unanimous endorsement of Clinton by Democratic elected officials and super-delegates.

"I would love to explore with you collaborative ways to advance that effort and ensure the revolution for people, planet and peace will prevail. Please let me know if you're interested in talking," Stein concluded.

This isn't the first time the Harvard-trained physician has reached out to the Sanders campaign with an offer of a possible third-party unity ticket.

But, Stein said, "that phone call has not been returned and I don't expect that this will happen."

"We're different," she added. "He is working inside the Democratic Party. I threw in the towel a long time ago."

In another interview with The Huffington Post last month, Stein expressed worries that Sanders’ campaign would ultimately end and his supporters will eventually support Hillary Clinton, arguing that the primary “is over” and that “the party machinery is behind [Clinton].”

"There are many things about Sanders that are great. We agree on a lot domestically. But to allow yourself to be lulled into compliance with the Democratic Party means you’re allowing yourself to be reined in from establishing a real progressive message,” she said.

For his part, Sanders has repeatedly stated he intends to support the eventual Democratic nominee -- even if it is Hillary Clinton.