They have no idea what to do: The GOP lacks basic competence — just look at Kasich and Cruz's "brilliant" plan to deny Trump the nomination

Kasich and Cruz's new plan is profoundly dumb, but that's the result of Republicans running off competent leaders 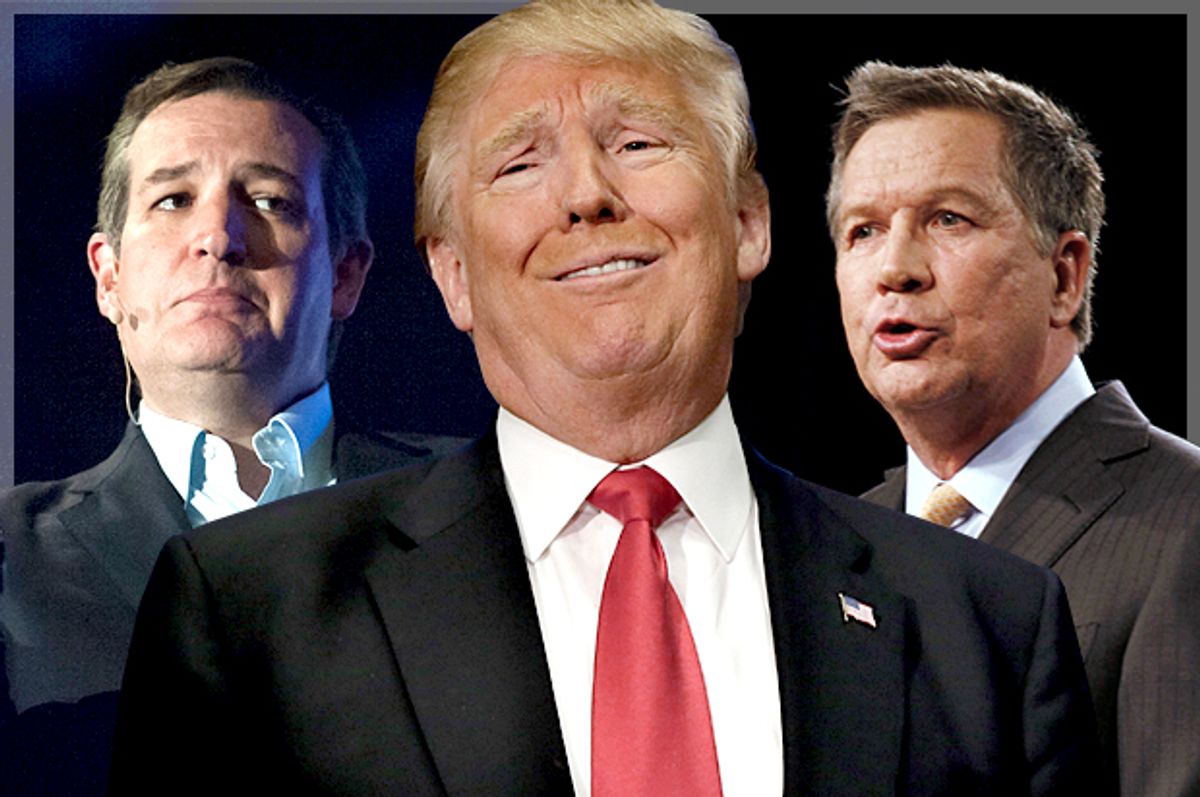 Donald Trump is blessed with incompetent enemies. Not since Jeb Bush dropped out of the race have we seen anything as comically pathetic as John Kasich and Ted Cruz openly conspiring to deny Trump the nomination through a half-baked plan to divvy up the remaining primary states in an attempt to deny Trump a large enough delegate lead to avoid a contested convention. The whole sorry affair is a reminder that the Republicans have a serious deficiency when it comes to competent leadership, which is one of the main reasons that Trump has been able to get as far as he has in this election season.

The Cruz/Kasich plan is something that could only be hatched by people whose confidence in their own cleverness is completely unmoored from any real world evidence for it. The idea is that, at this late stage in the game, each of them will "throw" certain states to the other through the magic of not doing local campaigning for a week. Kasich promises not to campaign in Indiana anymore and Cruz will, in exchange, not campaign in Oregon and New Mexico.

And....that's it. They aren't withdrawing their names from the ballot. Nor are their campaigns sending out messages to voters to vote for the other guy. The hope is that by Kasich simply removing himself from the campaign trail in Indiana for a whole week, the voters who were planning to go for him will beat feet to Cruz, edging him over Trump, who is currently in the lead in the winner-takes-most state. Brilliant plan, guys. Really top notch. It will be a total surprise when voters, completely unaware or indifferent to this plan, just vote for who they want and Trump wins anyway.

Plus, the whole move shows that Kasich and Cruz have no understanding of the conservative base they're trying to woo. These are folks who have heard for decades now that they are the victims of some great elite conspiracy to rob them of their right to control the country. Trump has already plugged himself into that narrative, telling Republican voters that there is a conspiracy to deprive him of the nomination and, through that, deprive the voters of their right to choose the nominee.

This move shows he's not paranoid at all, because there is, in fact, a conspiracy to deprive him of the nomination and, by virtue of that, deprive the voters of their right to pick the nominee through majority rule. Trump is already getting a poll boost from telling voters that the elites are out to get him.  What's going to happen now that the conspiracy has been proven real?

Trump is not a brilliant politician. He's not a savant whose genius instincts stomp all over any effort by experienced politician to stop him. He's a man who got really, really lucky, in that he made a run for president against a field that was so overstuffed with incompetents that he looks like a genius in comparison. This latest brilliant plan from Kasich and Cruz highlights that. He's not so much winning anymore as these fools are losing.

Moreover, the whole thing is a symptom of what is a deeper problem for the Republicans, which is a total inability to get competent people into the upper echelons of leadership. It's comical to consider all the chatter last summer about the "deep bench" the party had to offer in the Republican nomination contest, as the over a dozen people who threw their hat into the ring turned out to be an embarrassment. The Republican party is stuffed to the gills with people who think they are smart and capable, sure, but is mostly empty when it comes to those who have accurate self-assessment.

It's not just with presidential politics, either. It wasn't that long ago that the Republican caucus in the House of Representatives hit a crisis point because they were so incapable of securing a Speaker of the House that had some capacity to do the actual job. John Boehner wasn't anyone's idea of an effective leader, but compared to those who were on offer to replace him, he seemed downright adequate.

Things have gotten so bad on that front that Paul Ryan, who had failed at his state of the union response and in his vice presidential run, got the red carpet treatment when he finally stepped into the role.

But guess what? He's not very good at being the speaker, either.

"He famously cannot get a budget resolution passed. He's done nothing on the list of priorities he announced when he took up the gavel," Ed Kilgore of New York writes. "But beyond those failures, he can't even deal with emergencies, including the Puerto Rico debt crisis, the Zika crisis, the Flint water-poisoning disaster, and the opioid epidemic."

This isn't about Ryan having different ideological views or priorities that liberals would prefer. This is just a matter of competence, and Ryan does not have it. Which isn't too surprising, since he's in the same party that is literally treating Cruz, a man who is so bad at being a politician he has managed to offend nearly everyone who should be his ally in D.C., like he's the professional alternative to Trump. The Republicans would do better offering a bag of rice as the #NeverTrump alternative. It may not be much to look at but it's white and it's not as creepy as Cruz, giving it a better shot at winning conservative voters over.

This competence problem in leadership for the Republicans is a direct result of the many decades the party has spent prioritizing right wing radicalism. The minimum entrance requirements to be a powerful Republican have become increasingly incompatible with the skills needed to be an effective leader. Republicans are expected to be right wing ideologues of the most hard core sort, which means believing in global warming denialist conspiracy theories, regarding Ayn Rand as a great intellectual, and arguing that the best way to fight poverty is embrace policies that exacerbate income inequality.

Which isn't to say that conservatives are stupid. That's trite and essentially meaningless. No, the real problem is that conservatives have made a rejection of reality a basic requirement to hold office as a Republican, especially high up offices that have significant amounts of power. Being good at denying reality, alas, isn't very compatible with dealing with reality. Which, in turn, leads to underpants gnome theories of denying Trump the nomination.