Why I say "Bernie or Bust": If Sanders isn’t the Democratic nominee, his backers should not pull the lever for Hillary Clinton

Party loyalty should be reciprocal; not simply a lesser evil calculus 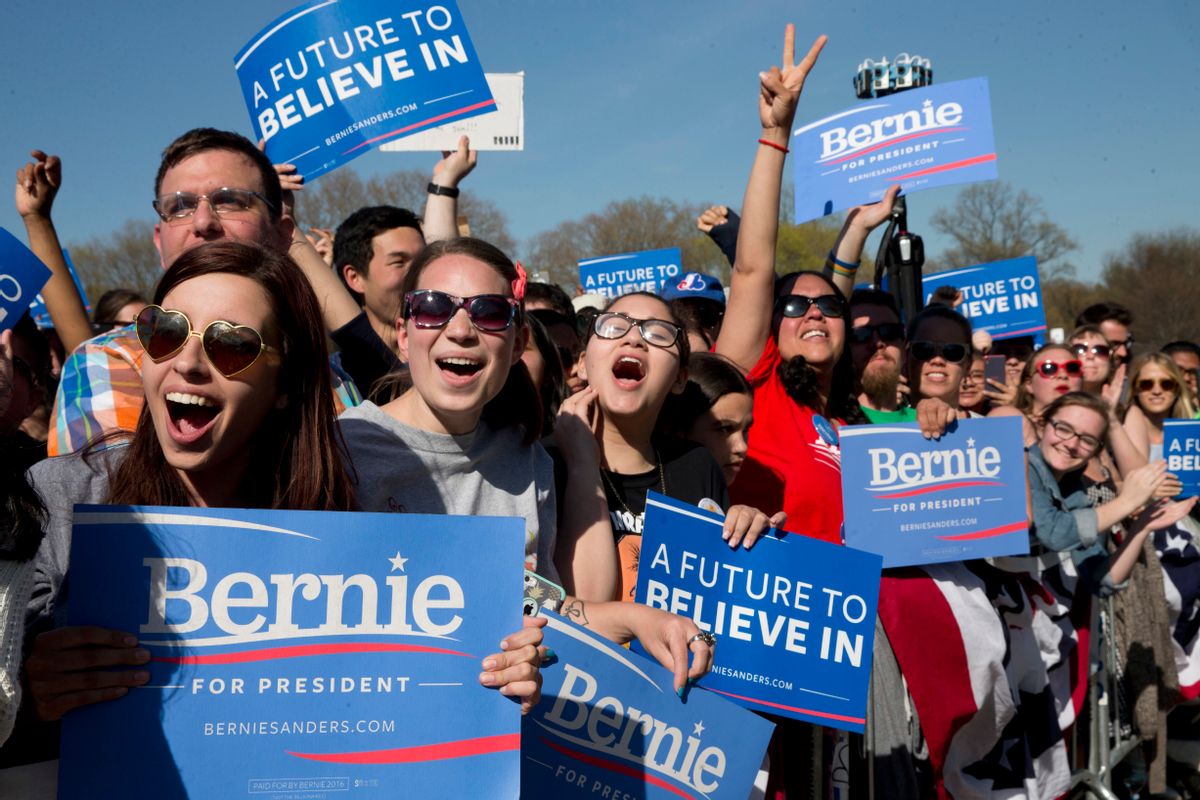 FILE - In this April 17, 2016 file photo, supporters cheer as Democratic presidential candidate Bernie Sanders speaks during a campaign rally in Brooklyn's Prospect Park, in the Brooklyn borough of New York. New York City's Board of Elections, long a target of complaints, came under fire as followers of Bernie Sanders, many from Sanders' hometown borough of Brooklyn, said they were unable to vote in the Democratic primary. The New York Board of Elections has suspended its chief clerk in Brooklyn without pay amid questions into whether she followed proper procedures in what was supposed to be a routine housecleaning of voter registration lists. (AP Photo/Mary Altaffer, File) (AP)
--

Why would Bernie or Bust voters risk a future with Donald Trump by refusing to vote for Hillary Clinton?

As we’ve heard throughout this election, “Don’t let perfection be the enemy of the good.” Sure, Clinton would be better than Trump, but better won’t prevent the next endless war, or devastating financial collapse. President Obama is sending even more American soldiers to Syria, imagine what Clinton would do as president.

Perfection, from the perspective of keeping the status quo, would begrudgingly be voting for Clinton and upholding a flawed system.

We’ve had too many never-ending wars, and financial debacles, to stick with a system that rewards candidates under FBI investigation.

The long-term good, for the Bernie or Bust movement, is to ensure future Democratic nominees aren’t advised by Henry Kissinger, paid millions by Wall Street, or given donations from political rivals like Donald Trump.

Sorry, I’m never voting for a Democrat who accepted, alongside her husband, $153 million from Wall Street. How does this affect her value system? These millions were given so that Clinton doesn’t advocate breaking up Too Big to Fail banks or reinstate Glass-Steagall. It’s structural change that Wall Street fears, not a watered-down Dodd-Frank.

Most importantly, Conor Friedersdorf of The Atlantic wrote a piece titled "Hillary Helps a Bank—and Then It Funnels Millions to the Clintons." It’s a brilliant piece, and explains the profound manner Clinton is influenced by Wall Street donations.

Other great articles on this topic include POLITICO’s "Why Wall Street Loves Hillary" and CNBC’s "Clinton rakes in Wall Street cash amid tough talk."

Well, Trump donated to Clinton’s Senate campaigns, donated to the Clinton Foundation, and goes golfing with Bill. The Washington Post writes "Trump’s donation history shows Democratic favoritism." If Bill and Hillary Clinton never feared Donald Trump, then why should you?

Also, Bernie Sanders defeats Trump and Cruz by wider margins than Clinton, and isn’t linked to an FBI investigation. In addition, millions of voters around the nation will only vote for Bernie Sanders, and nobody else. Revolt Against Plutocracy is an organization that has over 79,000 people pledging to write-in Bernie Sanders. A Yahoo article titled "Majority of Americans can’t fathom supporting Trump or Clinton (or Cruz)" states “They may be the frontrunners, but a majority of Americans can’t see themselves supporting either Donald Trump or Hillary Clinton.”

Even positive articles about Clinton are explained in an amusing manner, like this Guardian piece titled "This may shock you: Hillary Clinton is fundamentally honest."

Yes, that would shock the 67% of Americans and 64% of American women according to Quinnipiac that find Hillary Clinton “not honest and trustworthy.”

In every defiant piece explaining the rationale behind voting for Hillary, just do a word search.

Hillary voters see only one thing: experience. Everything else, especially decision-making, is irrelevant to them.

Bernie or Bust voters can’t vote for someone too frightened to disclose a Goldman Sachs speech transcript.

While Bernie speaks openly to millions, Clinton can’t type an email, or perform a simple speech, without scandal.

Four years of Trump isn’t optimal, but his presidency will result in eight years of a Democrat. Four years of Clinton, and you get four years of more controversy, unimaginable gridlock, and GOP impeachment.

The transcripts, though, symbolize something profound. Yes, these transcripts could end Clinton’s campaign, but the reasons they could end her campaign embody the Bernie or Bust movement.

Bernie Sanders wants to break up banks so they can’t sink the economy if they once again go bankrupt. Clinton accepts millions from Wall Street, precisely never to address these structural issues.

Most importantly, Bernie Sanders is against perpetual military quagmires. Hillary Clinton is a hawk, advised by Henry Kissinger, who voted for Iraq and recently advocated sending more U.S. ground troops to the Middle East. Minor details, to the Hillary voter.

In addition to Wall Street ties, racism against Obama in 2008, and a “neocon” foreign policy, Clinton has received immense support from the DNC, despite being at risk of DOJ indictment.

Therefore, how did the Democratic Party get to this point?

Conventional logic states that since Hillary Clinton defeats Donald Trump by 9.3 points in general election matchups, the former Secretary of State would become president. However, during my CNN New Day appearance on February 27, I stated poll numbers at the time showing Clinton barely beating Trump, by less than 3 points. Furthermore, in 10 out of 10 national polls, Clinton faces negative favorability ratings by an average of 17 points.

By an average of 17 points.

Democrats won’t win in November with such polarizing numbers.

Once the FBI discloses the findings of its year-long investigation, Clinton’s favorability ratings will hit an all-time low. As stated by "The Wall Street Journal" in March, “The criminal investigation into Mrs. Clinton’s email setup is clearly progressing...”

Yes, this is a “criminal investigation.”

Also, POLITIFACT clearly states that Clinton’s claim her predecessors did the same thing is “mostly false.”

To believe the FBI is merely performing a security review would be to believe Clinton use a private server for “convenience.”

Because this story has nothing to do with convenience, I explain in this YouTube segment why the FBI will likely recommend indictments for Hillary Clinton.

This scandal isn’t only about servers, it’s also about Blackberry phones and cloud servers. Clinton asked the NSA for a secure Blackberry and when she was denied, US News & World Report stated “...the specific reasons Clinton’s requests were rebuffed are being kept secret by the State Department.”

Despite being denied by the NSA, Clinton still used an unsecured Blackberry.

Regarding the POLITICO piece titled "Past cases suggest Hillary won’t be indicted," you might as well read an article titled “Past secretaries of state who stored 22 Top Secret emails on unguarded servers went on to become president.” First, it states indictment to be unlikely, “but not impossible.” However, none of the major cases discussed, from Sandy Berger to General Petraeus, involved a private server, cloud servers, unsecured Blackberry phones, 31,830 deleted emails without government supervision, thousands of classified documents, 22 Top Secret files on an unguarded private server, witnesses granted immunity, or the internet.

Other cases never involved Clinton’s email setup. Clinton had a private server that faced hacking attempts from China, Russian, and other nations.

Most importantly, Clinton’s “intent” has been completely glossed over by every article doubting DOJ indictments. Hillary Clinton stated her use was a matter of “convenience,” and everyone from The Washington Post to POLITICO seems to give Clinton this benefit of the doubt.

Well, the FBI will not.

Mr. Comey, millions of people are waiting; the nation is waiting.

Bernie or Bust exists, because even Charles Koch is fine with Clinton, but would never endorse Bernie Sanders. Party loyalty should be reciprocal; not simply a lesser evil calculus. In 2016, only Bernie Sanders offers structural change and tackles a corrupt system. If a great many voters don’t see real change, they won’t settle for anything less, and fear of Trump won’t sway their vote.