Lena Dunham will destroy Donald Trump: Millennials are now the largest generation, and their power is enormous

Don't move to Canada, Lena! The Left needs you and your generation's politics now more than ever 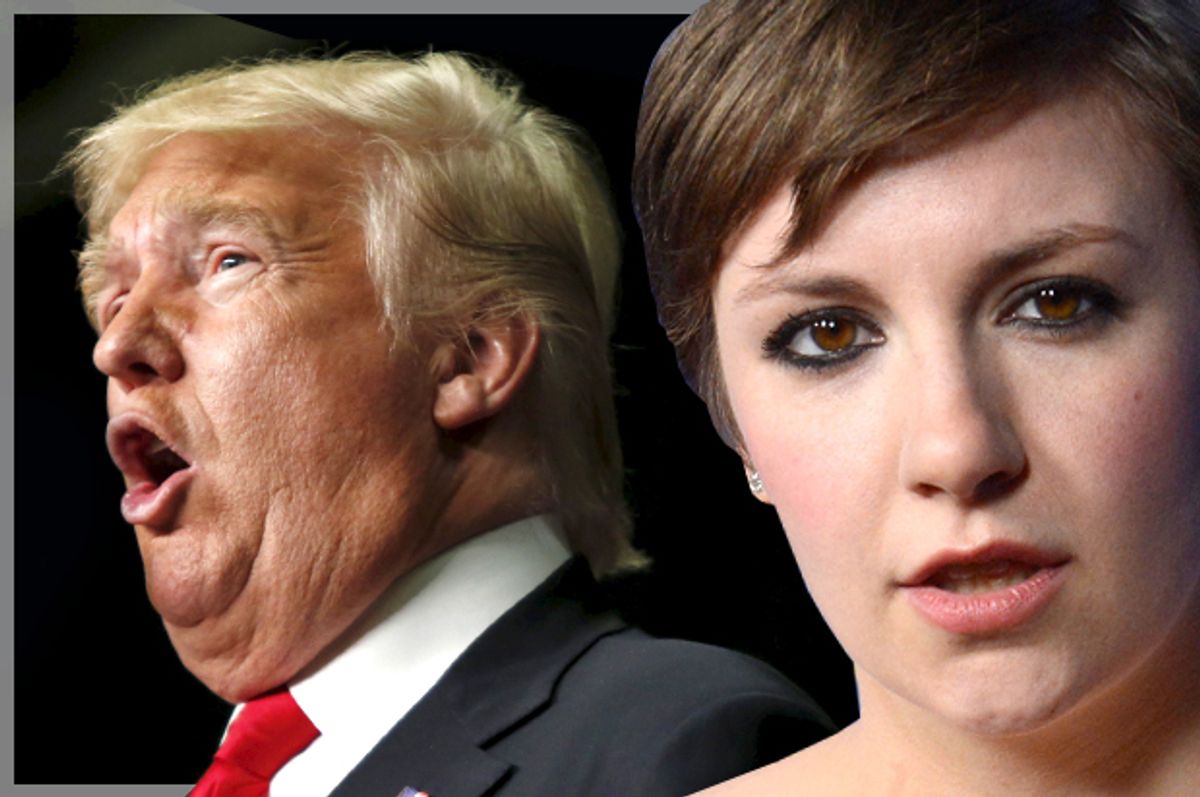 By now, Millennials have absorbed so much insulting and stereotyping it’s amazing that it’s a wonder any of them still talk to their non-Millennial friends. Hoverboards, entitlement, constant texting – they all contain a grain of truth, but they’ve been worked through in so many think pieces that it’s getting a little unfair. (I still reserve an elder's right to mock Justin Bieber and other musicians beloved by those in the 18 to 34 range.) But new census numbers have come out showing that Millennials are now the largest generation in the country – larger than Baby Boomers – and it’s not a minute too soon.

Here’s how the Pew Research Center reports it:

"Millennials have surpassed Baby Boomers as the nation’s largest living generation, according to population estimates released this month by the U.S. Census Bureau. Millennials, whom we define as those ages 18-34 in 2015, now number 75.4 million, surpassing the 74.9 million Baby Boomers (ages 51-69). And Generation X (ages 35-50 in 2015) is projected to pass the Boomers in population by 2028."

We’ve been expecting this for a while, so it’s not a huge shock. But the news arrives at an interesting time: So many Boomers — many of whom celebrate their roles in the civil rights movement, antiwar protests and other liberal and lefty movements – have moved to the political right that the nation now needs a large crew of Millennials to save it from certain doom. And whatever their cultural habits, young people are shaping up as the bulwark that will keep the country safe from a Donald Trump presidency. A new Harvard Institute of Politics poll, which came out this week, shows Millennials going for Hillary Clinton over Trump by 61 percent to 25 percent – a 35 point difference. Young people leaning to the Democrats is hardly new, but this is much more extreme than what we’ve found in the past. As Politico reports:

Trump has also insulted Millennial hero Lena Dunham, responding to her threat to move to Canada if he was elected with, “She’s a B-actor, and has no mojo. I heard Whoopie Goldberg said that too. That would be a great, great thing for our country.” A few more lines like this, and those numbers will go up.

Why does Trump turn off young people so much more extremely than he does other generations? Part of this is that Millennials are more likely to be immigrants or minorities than older generations are, and Trump’s anti-immigrant rhetoric isn’t exactly winning them over. I’m going to speculate that his macho style is something that does not fly with a generation that has more nuanced sexual politics, too.

But Millennials also have a more skeptical view of capitalism – this is part of the reason many are supporting Bernie Sanders—and Americans between 18 and 26 are so liberal that, as Frank Luntz puts it, “the hostility of young Americans to the underpinnings of the American economy and the American government” should “frighten every business and political leader.”

And when it comes to marriage equality Millennials are not only a little bit more favorable than Boomers, they’re way more favorable: 73 percent support same-sex marriage, as compared to 45 percent of Boomers.

Even as a Gen X loyalist, I must admit that the politicians we’ve put into the national spotlight have mostly been unpleasant ones like Ted Crux and Rand Paul. Our skepticism is important, but Millennials have become progressive activists with an intensity it’s hard to imagine us summoning.

It’s probably time to forgive the Millennials in your office for those tuna-fish sandwiches.

Millennials may harden in their views as they age and become conservative just like some Boomers have. But for now, this generation could save the country from demagoguery and intolerance. So this Xer salutes them – let's hope they don't all move to Canada.