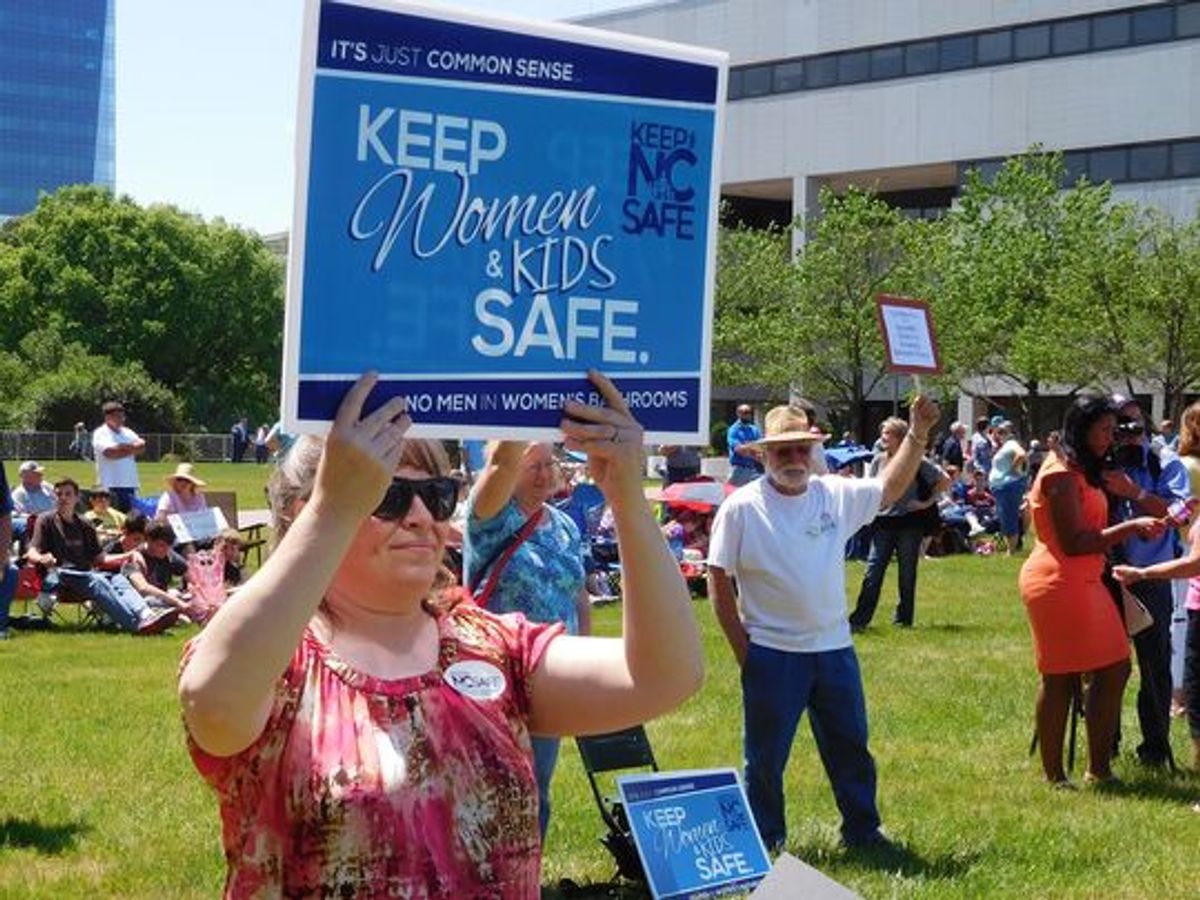 A supporter of HB2 holds a sign at a demonstration Monday in Raleigh. (Mark Barrett/mbarrett@citizen-times.com)
--

While NAACP protesters held a sit-in at Republican Governor Pat McCrory’s office in Raleigh, North Carolina, Monday, to demonstrate against the state's discriminatory anti-transgender bathroom ban, proponents of House Bill 2 rallied in front of the state capitol and called on the conservatives of North Carolina to keep the "state straight."

"Go home, tell your friends and family who had to work today what this is all about and how hard we must fight to keep our state straight,” Republican state Senator Buck Newton told the thousands of North Carolinians who descended upon the statehouse on legislators' first day of their regular session to urge Republican lawmakers to stand firm in the support of the discriminatory bill in the face of national outcry and widespread backlash. Not one North Carolina Republican lawmaker has publicly endorsed repealing the recently signed legislation. HB 2, of course, bans cities and localities from passing strong nondiscrimination protections for transgender people and bans transgender people from using the bathroom that corresponds with their gender identity.

In video posted online by Progress North Carolina Action, the Republican nominee for attorney general in the state, said supporters of the law are simply trying to keep their “wives and our sisters and our children” from being exposed “to the sexual predators in the bathrooms.”

Now it's been said that there are many, many, many, many more sexual predators on the sex offender list than there are transgender people. And we can all feel sympathy for folks who are having difficult times, because we all know folks that have a difficult time, whether folks are struggling with drugs, are struggling with their marriages, figuring out what it is that they're supposed to be doing in life. We can all have sympathy for that. But that does not mean that we should expose our wives and our sisters and our children to the sexual predators in the bathrooms.

"Can you believe we're talking about this today? I feel a like Alice in Wonderland." Newton told the crowd. "We all know that the folks that wave the rainbow flags and things like that are politically very upset about the way things are today. They’re upsets about the way things have always been in this state."

Newton ended by encouraging the demonstrates to fight to "keep our state straight":

The North Carolina Democratic Party issued a statement calling the comments hateful and discriminatory and called for Newton to apologize, according to the ABC News. Democrats in North Carolina have also called on Gov. McCrory to denounce Newton's remarks.

Companies protesting HB2 have cost North Carolina more than 1750 jobs and more than $77 million-worth of investments and visitor spending, according to a report from Time Warner Cable News released last week.