The man who made Ted Cruz possible: How Tom DeLay set the stage for this generation's most-hated lawmaker

DeLay is in the news these days for defending Denny Hastert against sex abuse charges. 20 years ago, he was a giant 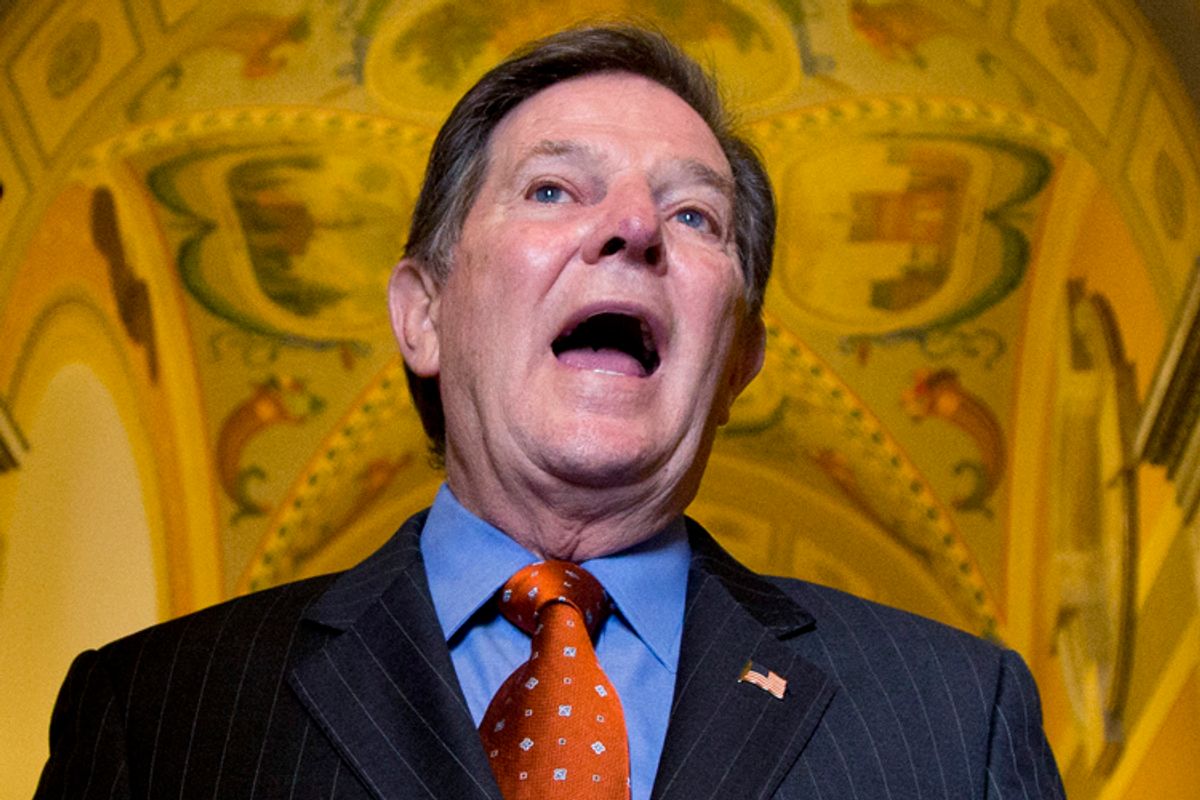 2016 is a political season of epic peculiarity and weirdness, so perhaps it's not too surprising that the news of a former speaker of the House being convicted of paying hundreds of thousands of dollars in hush money to a former student he molested when he was a wrestling coach years before is part of the mix. It's a testament to how far we've defined deviancy down that this has only caused a minor ripple in the press. He's an elderly man now and he has been out of office for a decade but some of the craziness we are experiencing today can be traced back to his heyday, so it's worth taking a look at the Dennis Hastert years to see how we got to where we are now.

Dennis Hastert has one man to thank for his career as speaker: former Texas congressman Tom DeLay, the Republican hatchet man who rammed the impeachment of Bill Clinton through the House and out-lasted Newt Gingrich in the GOP leadership. (He also has to thank him for writing a letter to the judge in his case, attesting to the character of his old compatriot and claiming that Hastert had never disappointed him "in any way," apparently not even when he found out he was a sexual predator.)

DeLay was the power behind Hastert's throne, the whip known as "the Hammer" who preached and perfected the brand of take-no-prisoners politics currently practiced by the Tea Party and House Freedom Caucus. He was the man who made Ted Cruz possible. As the majority whip and majority leader during the Clinton and Bush years, he was an extremely powerful leader who had been looking for crimes and procedural offenses that would help him make the case for impeachment of liberal judges he felt were too liberal long before he jumped on the Clinton impeachment train. He had no patience for normal democratic processes and believed in achieving his goals by any mean necessary.

He pushed impeachment hard, making insinuations to the press that he knew more than he could say publicly and pressing his fellow House members to go along. The born-again Christian (who had been known by his friends as "hot tub Tom" in his youth) was quoted saying, "I think Bill Clinton is the representative of the demoralization of America during my generation.” It was a crusade, but not just a moral one. He set out to prove that conservatives could rule by brute force and the plan was to destroy Bill Clinton and ensure that "those who jumped off the cliff with him will suffer politically. Starting with Al Gore.”

We all know how that turned out.

One of the big casualties of that whole mess was Newt Gingrich, who was forced out after the House lost seats in the 98 mid-terms during the impeachment saga. (It seems the public wasn't happy about the House deciding to depose a duly elected president against the will of the people. Imagine that.) But Gingrich had been the subject of a failed coup the year before, led by none other than Tom Delay. James Carney at TIME wrote it up as it happened:

The plan was to have Armey, DeLay, Boehner and Paxon present Gingrich with a fait accompli: step aside or be voted out by parliamentary maneuver. What happened next is murky. By some accounts, when DeLay reported back to his fellow leaders later that Thursday night, he brought news that the rebels wanted Gingrich to be succeeded by Paxon, not Armey, who was next in line. Early Friday, Armey told his colleagues that he spent the night "praying with my wife" and decided he could not support the coup. "When Armey realized he wasn't going to be Speaker, he backed out," insists a knowledgeable source.

Not so, says Armey. When details of the aborted putsch broke in the July 16 edition of the scrappy weekly newspaper the Hill, he issued a statement that "any and all allegations that I was involved in some ridiculous plot to oust the Speaker [are] completely false, and, in fact, ludicrous." But later when Armey stood up in a meeting of House Republicans and declared that the Hill story was inaccurate, Lindsey Graham of South Carolina, a rebel leader, lunged for a microphone to challenge the assertion--knocking over a chair before another member could restrain him. Later, Armey changed his story. To his utter surprise, sources close to him now claimed, he realized that several of his fellow leaders--in other words, Paxon and DeLay--had been conspiring against Newt. Asked at a press conference whether DeLay should resign, Armey remained silent. DeLay wouldn't comment on any of it. And Boehner said he'd been assessing the rebel threat, nothing more... "The Speaker doesn't want to waste time figuring out the intricacies of what happened," a Gingrich aide said. "He wants to move forward."

The Speaker did have time, however, to plot his revenge--and he settled on DeLay as his next target. Privately, Gingrich told associates that he wanted to remove the whip and replace him with DeLay's chief deputy, Illinois moderate Denny Hastert.

As you can see,  the current GOP lunacy didn't just spring out of nowhere.

Gingrich didn't succeed in replacing DeLay with Hastert, but when he was finally forced out the next year (and very briefly replaced by an embarrassing philanderer, Louisiana Rep. Bob Livingston) DeLay stuck in the shiv by putting Hastert into the Speaker's chair. DeLay ended up spending the next half-decade running the House as his private fiefdom and turning the GOP caucus into the obstinate, obstructionist, destructive force it is today.

And Texas was ground zero. For 130 years, Democrats had dominated the state. When the GOP finally won a majority in 2002, DeLay immediately instigated a new redistricting plan to favor Republicans, despite the fact that all the states had just redistricted in 2001. It went all the way to the Supreme Court, and DeLay prevailed. The result was that Texas went from being run by a big money, oil-rich, bipartisan political establishment to Tea Party crazy over the next 10 years and it produced DeLay's perfect extremist leader, Ted Cruz.

When he went to Washington, Cruz attempted to bust all norms and processes, almost as if that was an end in itself. He disdained the leadership of his own party as much as he does the president. He is a moral crusader without any ethics. And today he's fighting for the presidency using any means necessary, just like the man who made the Texas GOP what it is today. The Hammer's legacy is secure.