A more honest Iraq War story looks like this: "Sometimes the Marine Corps kind of sucks"

Salon speaks to Maximilian Uriarte about "The White Donkey," war movies, veteran suicide and life in a combat zone 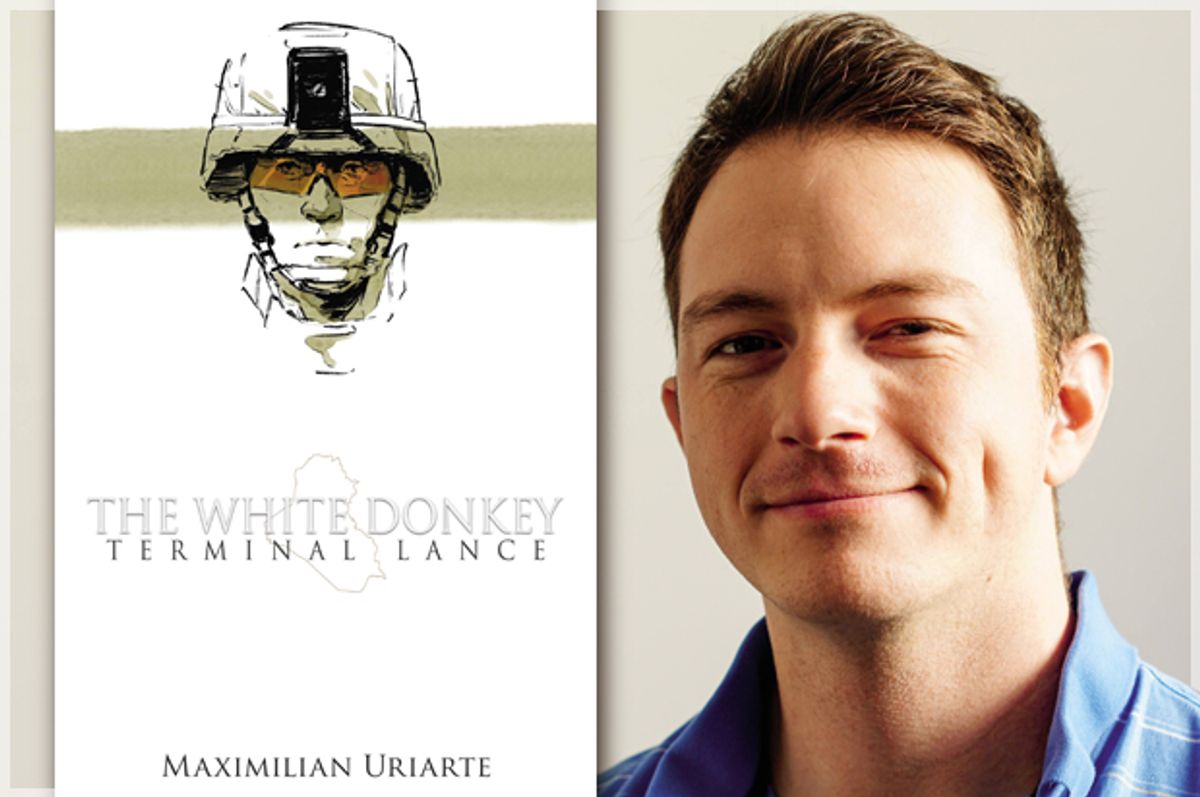 Grim, funny, lonely, at times even poetic, the new graphic novel “The White Donkey” gets at war in a way we’ve rarely seen. Written and illustrated by Maximilian Uriarte – a Marine who completed two tours in Iraq and created the web comic “Terminal Lance” – the book looks at two “boots,” Abe and Garcia, as they train and head to the Middle East. Fans of “Terminal Lance” will find the tone here much more serious.

The book spends more time with the characters’ psychology and friendship and less with battles and weaponry. It also has a restrained, almost austere visual style that makes a lot of use of black and white. Uriarte polished his drawing skills at the California College of the Arts and drew from Scott McCloud’s essential book, “Understanding Comics,” as well.

We spoke to Uriarte from his home in Los Angeles. The interview has been lightly edited for clarity.

“The White Donkey” has less combat than most readers will expect from a book about the Iraq War. Why tell the story that way?

I really wanted to tell a story that was more genuine, more true, to the experience I had when I was in Iraq. Ninety-nine percent of going to a war zone is a lot of boredom, a lot of frustration, a lot of tedium. I wanted to capture a more honest depiction of the Marine Corps experience rather then telling some action story about firefights and explosions. I wanted to tell a story that got at the heart and soul of the meaning of being a Marine and going to Iraq.

What have you heard about your book from veterans and Marines? Do they find it realistic as well?

The feedback I’ve gotten has been resoundingly positive from veterans and civilians alike. I think that Marines really appreciate the honesty of the book. We can all watch an action movie and be like, “Yeah, that’s so badass and cool…” But are we really being honest with ourselves about what our deployment meant, how we felt about it while we were there? I think “White Donkey” captures that aspect of it.

Did Marines have anything – books, movies – that gave an accurate description of what it’s like to be over there?

I’d say my two favorites are the movie “Jarhead” and the HBO miniseries “Generation Kill.”

What made you start “Terminal Lance,” and what were you aiming for?

I started “Terminal Lance” in 2010. I was still active duty at the time, which was risky because I could have gotten in trouble for making the comic. I wanted a web comic primarily to entertain Marines. But I also looked around the landscape of comics and didn’t see anything that spoke to my generation of Marines – young Marines who went through the Iraq and Afghanistan Wars… There just wasn’t anything that spoke to me as a junior enlisted lance corporal at the time. I wanted to make a comic strip that reflected that anger, that honesty – sometimes the Marine Corps kind of sucks…. A lot of the time you [hear from] people who were really motivated, loved it… Whereas a lot of the people I served with really didn’t enjoy themselves.

This book, “The White Donkey,” is a little different in tone. What’s its relationship to your comic?

The only difference is that it’s not as fantastical and silly as the web comic is – it’s not trying to be funny all the time. I think it captures the essence of “Terminal Lance” in its satire and humor.

Can you describe some of the things that made “Terminal Lance” less realistic? Some of it was pretty wild.

There’s one strip where a guy gets promoted to corporal. He starts transforming, and gets transformed into a literal giant douchebag.

Chief warrant officers 5’s are mythical creatures. So when the characters see one for the first time… he’s like a centaur being with a horn on his head. It’s ridiculous for the point of being funny.

One of the striking things about the book is that you use color very sparingly: Most of it’s black and white, with a wash of just one color on most pages. What drove you to do it that way?

I’m a really quick artists; I don’t enjoy spending a ton of time on any piece. And for me it was about the reader experience: What’s the reader going through, reading this page? What do I need to draw here in order to direct the reader’s eye, to get the full experience with the book, but without having to think about it. I want them to just intuitively understand what’s going on.

So the color reflects that since you can tell where you are in the book by the color, without ever drawing attention to it. So Hawaii’s green, Portland’s blue, Iraq is a sepia color, Twentynine Palms is more of a red.

One of the themes of “The White Donkey” is the suicide of veterans. How early was that idea in your conception of the book?

That was really the driving force behind the whole thing, from day one. I actually wrote ending first – that’s how I approach my writing. Then I figure out how to get there. The veteran community is plagued by the epidemic of suicide, [and so is] the active-duty community. And I wanted to tell a story that Marines could read. And if a Marine can read it and identify with it, they can see that they’re not the only person feeling that way, and it could inspire them to get help.

For civilians, I wanted them to read this book and really understand what veterans go through, get a better understanding, and see that we’re not all stupid grunts who couldn’t make it into college or whatever.

How much is the main character, Abe, based on your life? [Note: The story is prefaced with a page announcing: “THIS IS A WORK OF FICTION.”]

I’m half Mexican and half Jewish – my middle name is Abraham. Those characters [Abe and Garcia] are like two sides of myself. The book, from Hawaii, through training, to Iraq, is based on my experience.

You talked about how there wasn’t a comic like yours when you started working on it. What did you use as models and inspirations for “The White Donkey”?

I don’t read a lot of books. But I’m a huge movie guy. I saw the book as a movie, really – it’s essentially a story-boarded screenplay, put into book form. So I was [trying to think] of a three-act film and how to turn it into a graphic novel.

You mentioned “Jarhead.” Are there other movies that are dramatically powerful or capture what war is really like?

Stanley Kubrick’s “Full Metal Jacket” is one of the best war films of all time. These films that really capture the war experience or the Marine experience are quieter, they’re not action movies where things are blowing up all the time.

You’re hoping that this will become a movie, too?

Yes, my goal is to direct it -- to make this film.