Carly Fiorina for Cruz VP? The former tech CEO would be a disastrous running mate

Ted Cruz is considering Carly Fiorina for VP, which would sling all her outsourcing and layoffs around his neck 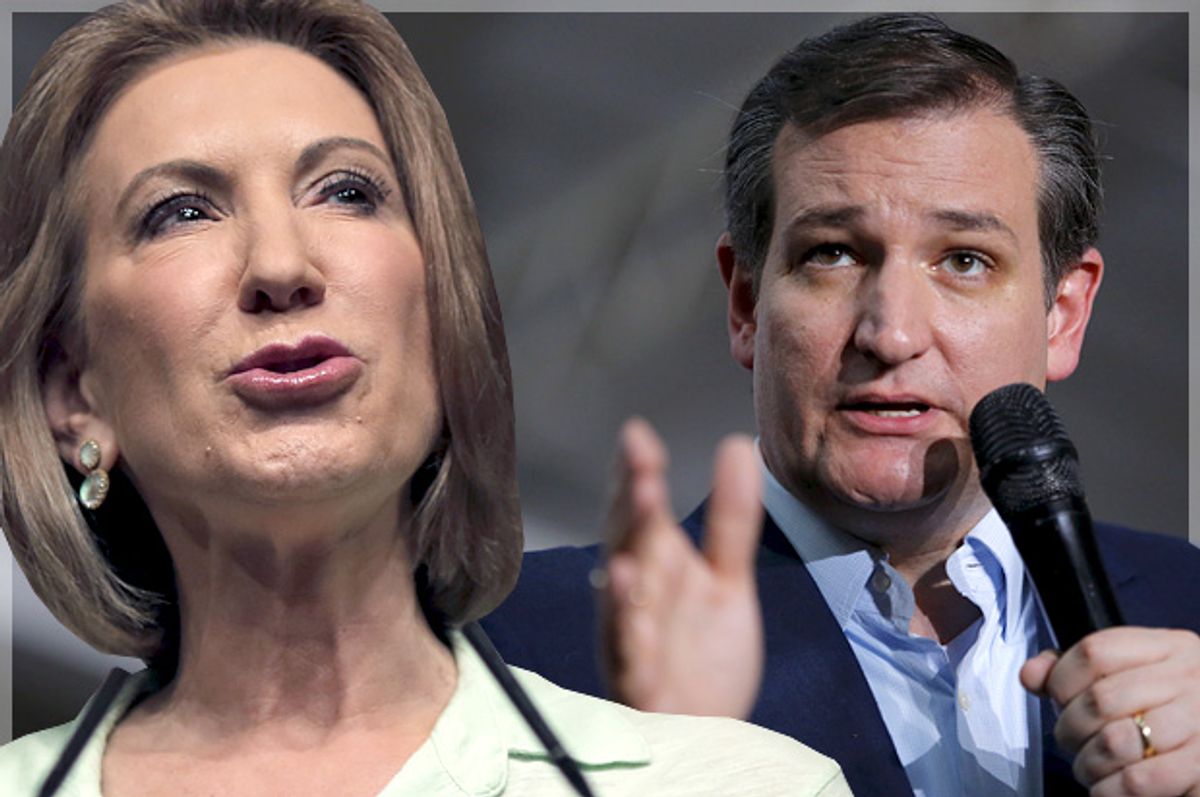 Ted Cruz’s odds of capturing the nomination aren’t especially strong (and they weren’t helped by last night’s thoroughly dominating performance by Donald Trump in five state primaries) but he’s plowing ahead nonetheless with the work of a candidate in the late stages of a presidential primary. That means looking ahead to the general election and narrowing down options for what will ultimately be the most consequential decision of any campaign: who will be the running mate. As the Weekly Standard reported this week, Cruz’s campaign is already vetting former 2016 candidate Carly Fiorina for the job, and various news outlets are reporting that Fiorina is one of the favorites, if not the favorite, for the job.

Some conservatives are even giddily anticipating an early announcement of Fiorina as Cruz’s running mate and hoping that it will somehow snap Republican voters out of their pro-Trump leanings. “Isn’t that a pretty attractive ticket?” Weekly Standard editor William Kristol said this week on MSNBC. “A very able, intelligent, young senator and a businesswoman of real distinction, who really won a lot of respect from Republicans during the debates.”

Far be it from me to question the political wisdom of someone so deeply respected as Bill Kristol, but let’s be clear about something here: Carly Fiorina would be an awful running mate for Ted Cruz or really anybody.

The lazy explanation for why Fiorina would succeed as Cruz’s running mate is that this is a year in which “outsiders” are favored and Fiorina, who ran for the Senate in California in 2010 but has never held elected office in her life, fits that description. Perhaps, but whatever appeal she has as an “outsider” is nullified by the considerable amount of baggage she brings with her.

As we’ve seen throughout the election cycle, the candidates whose messages resonate the most are the economic populists who rail against free trade agreements and outsourcing. Fiorina, a former tech CEO who presided over tens of thousands of layoffs and enthusiastic outsourcing to China, is wildly ill-suited to this political environment, which might explain why she was never able to capitalize on her brief moment of popularity last August. Any campaign that she signs on with will immediately find itself bombarded with two numbers: 30,000, which is how many people Fiorina laid off as CEO of Hewlett-Packard; and $21 million, which was the size of the golden parachute Fiorina received (not counting $19 million in stock options) after she was forced out by HP’s board of directors in 2005. She has never had an effective retort for these figures, and Sen. Barbara Boxer used them to devastating effect in 2010, helping her to crush Fiorina in a year when Republicans were unseating Democratic incumbents all across the country.

One thing Fiorina has managed to do, however, is carve out a reputation for herself as an aggressive and enthusiastic liar. She made headlines during the early Republican debates by offering graphic descriptions of an undercover Planned Parenthood abortion video that doesn’t exist. When confronted with the fact that she was lying, Fiorina dug in and insisted that she really had seen the nonexistent video. This same belligerence towards observable reality popped up again when Fiorina accused Barack Obama for forcing Gen. Jack Keane into retirement, even though Keane retired half a decade before Obama was elected president. Once again confronted with the truth, Fiorina refused to back off and insisted she was correct. For someone like Cruz, who has faced persistent attacks over his own honesty throughout the campaign, tapping a brash and unrepentant fibber like Fiorina would only reinforce an already damaging narrative.

That being said, there are a couple of positives to Fiorina as a running mate:

She actually seems to like Ted Cruz? Most of the high-profile Republicans who’ve endorsed Cruz make clear that their hands have been forced by circumstance and that they’re only endorsing Cruz because he’s the only chance they have of stopping Donald Trump. But Fiorina, while her endorsement was almost certainly powered by her obvious animosity towards Trump, has been a prominent and stalwart Cruz surrogate in the weeks since she backed his campaign. For Ted Cruz that’s a rare and precious thing – a Republican who actually makes a positive case for his nomination.

She’s a woman. Should Cruz wind up with the nomination and pick Fiorina as his running mate, that would mean, in all likelihood, that both major-party tickets would have a woman on them, which I believe is what social scientists refer to as “progress.” From a more crassly political perspective, though, putting Fiorina on the ticket would reassure Republicans who are already preemptively seething with resentment over how Clinton will “play the gender card” to characterize every criticism of her as sexist. Fiorina zeroed in on this dynamic early on and offered it to Republican voters as an advantage she would enjoy as the Republican nominee. “I think that if Hillary Clinton were to face a female nominee, there are a whole set of things that she won't be able to talk about,” Fiorina said a year ago. “She won't be able to talk about being the first woman president. She won't be able to talk about a war on women without being challenged. She won't be able to play the gender card.” Cruz might lean on Fiorina to provide him cover the next time he says some weirdly sexist shit.

But those positives don’t nearly compensate for Fiorina’s negatives as a vice presidential nominee. She’s shown no real aptitude for winning higher office, she lies in ways that are too flagrant to ignore, and her business record would be a drag on any ticket.