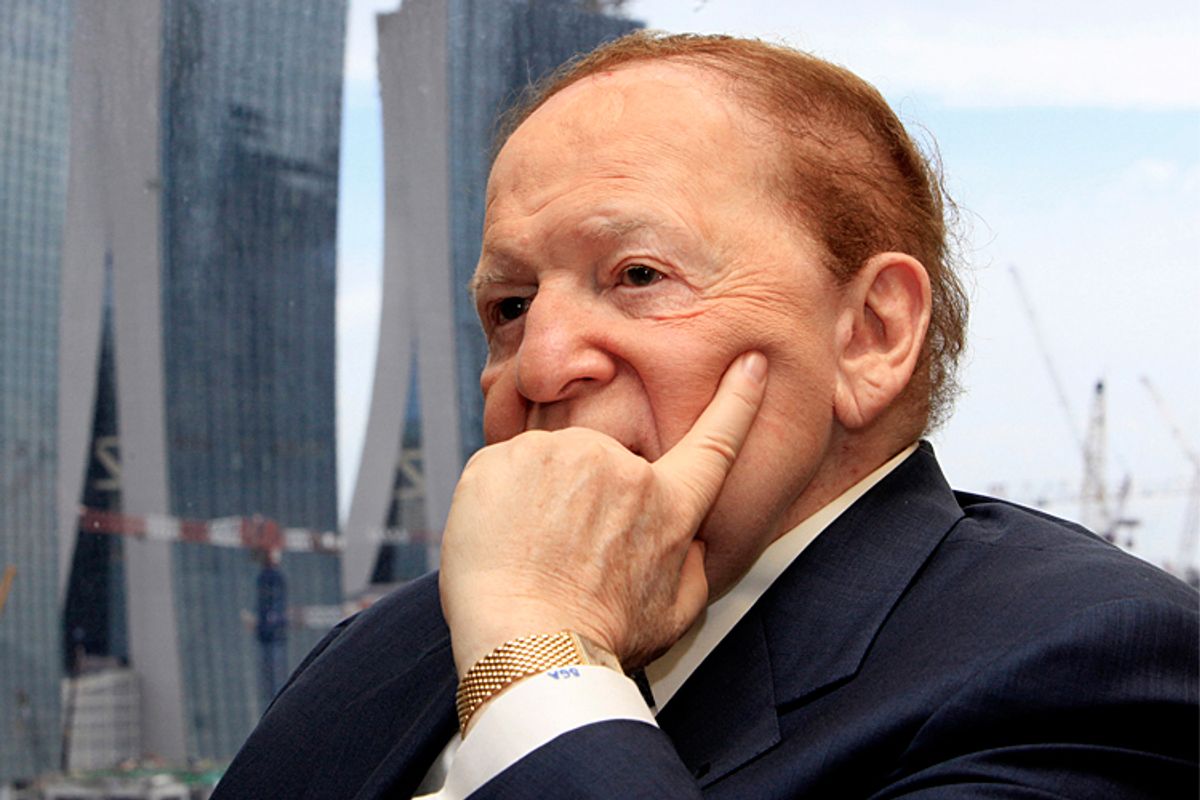 A prominent columnist resigned after being told he can't write about the influential right-wing billionaire whose family owns his newspaper.

John L. Smith, a columnist for the Las Vegas Review-Journal, released a letter on Tuesday announcing his resignation.

"In Las Vegas, a quintessential company town, it’s the blowhard billionaires and their political toadies who are worth punching," he wrote in the letter. "And if you don’t have the freedom to call the community’s heavyweights to account, then that 'commentary' tag isn’t worth the paper on which it’s printed."

"It isn’t always easy to afflict the comfortable and question authority, but it’s an essential part of the job."

Adelson is a prominent Republican moneyman, notorious for bankrolling GOP presidential efforts. Republican candidates are compelled to go through the so-called "Adelson primary" if they hope to win their party's nomination. They are also expected to adopt Adelson's hard-line foreign policy views. The billionaire is a die-hard Israel supporter, going so far as to claim the Palestinians are "an invented people," and has called for a preemptive nuclear attack on Iran.

Several journalists have left since Adelson bought the publication in December 2015.

When it was purchased, the Review-Journal published an editorial promising it would ensure “fair, unbiased, and accurate” coverage.

As early as January, Smith was told not to write about Adelson, The New York Times reported.

Adelson unsuccessfully sued Smith for libel a decade ago, claiming the columnist's book “Sharks in the Desert: The Founding Fathers and Current Kings of Las Vegas” was defamatory. Adelson eventually dropped the case, but bankrupted Smith with legal fees in the process.

Moyer, the paper's editor, claimed it was a conflict of interest for Smith to write about Adelson, citing the failed lawsuit.

"The coverage restrictions worried reporters at the paper and close observers of the R-J, which has increasingly come under Adelson's influence since his family purchased the paper," Politico reported.

Jon Ralston, a former R-J columnist, told Politico, "I just think the whole thing is the tip of the iceberg that shows that Sheldon Adelson is closely involved with how the paper is run."

Moyer denied that Adelson has any control over the newsroom.

In the letter he distributed to colleagues, Smith stood up for the importance of muckraking journalism.

"I learned many years ago about the importance of not punching down in weight class," he wrote. "You don’t hit 'little people' in this craft, you defend them."

Smith concluded his message to co-workers writing, "Your hard work and dedication remind me every day that journalism is better than ever — even if management leaves something to be desired."

[Editor's note: An earlier version of this story incorrectly identified Steve Wynn as a co-owner of the Las Vegas Review-Journal.]