After tweeting some dubious statistics the other day, Robbins had a bit of a social media meltdown 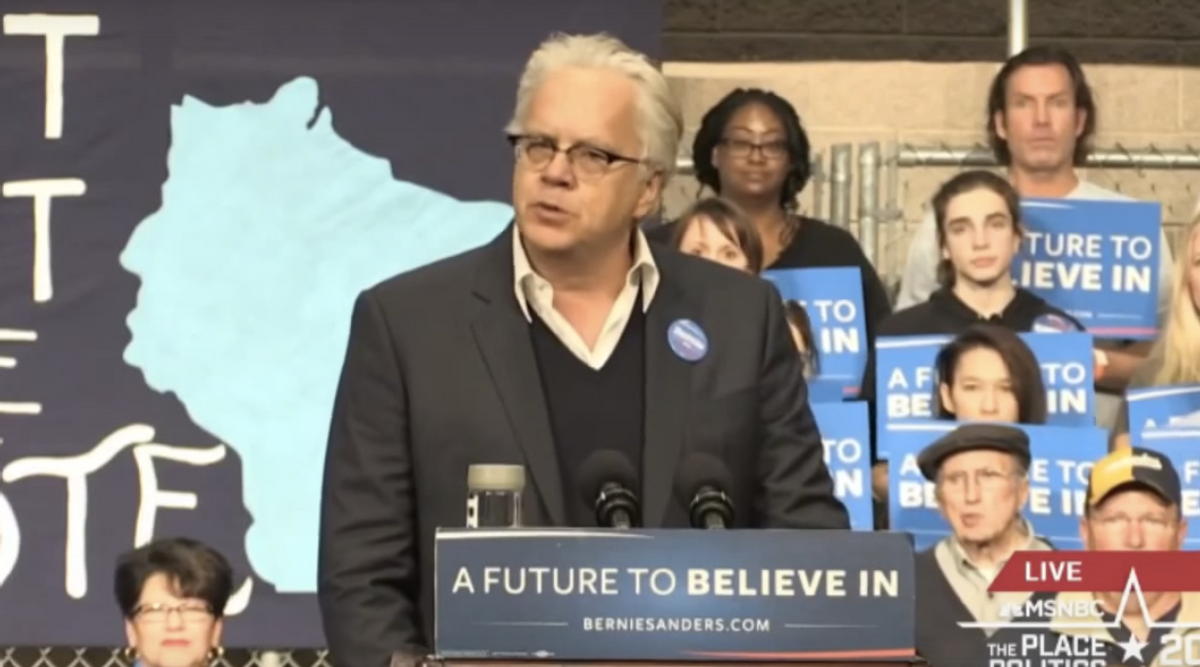 On Monday, actor Tim Robbins had a bit of a social media meltdown.

Robbins had tweeted a chart that claimed to show exit polls favoring Bernie Sanders in the Democratic primary wildly diverged from reported election results that greatly favored Hillary Clinton. Thus, according to the entrails of the disemboweled turkey that the creator of this chart must be reading, Sanders has actually won more primaries and delegates than he is getting credit for.

When Twitter users pushed back on Robbins by noting all the problems with this line of thinking, the actor responded by accusing many of his critics of being paid trolls working for Correct the Record, the super PAC formed to respond to what it sees as misinformation being spread about Hillary Clinton. He fired some version of this tweet at individual detractors – by one count, 88 of them – before deleting and replacing them with this one rant that makes it sound as if Robbins is jumping at his own shadow. If next week someone finds him wandering around Washington Square Park wearing a bathrobe and a colander on his head, I won’t be surprised.

It seems to have been a rough couple of weeks for celebrity backers of presidential candidates. For one, Robbins himself had just recently caused a dust-up by disparaging Clinton’s win in the South Carolina primary. Meanwhile, another famous Sanders supporter, Rosario Dawson, raised some ire by invoking the name of Monica Lewinsky to tweak Clinton, a move guaranteed to send Hillary supporters into a frothing rage.

On the other side of the aisle, Friends of Abe, a secretive 501(c)(3) nonprofit whose membership consists of right-wing Hollywood celebrities and entertainment industry bigwigs, announced it was shutting down. Rumors swirled that the group broke up partly because of infighting between supporters of Donald Trump and Ted Cruz. Which is a little like a couple breaking up because they can’t agree on which of them is enduring the more painful herpes outbreak.

More generally, all of these incidents and more highlight one of the most irritating and inane traditions of presidential campaigns: the flaunting of a candidate’s celebrity supporters. It is yet one more way in which we put celebrities on pedestals, ignoring the possibility that as human beings, they are just as flawed and ill-informed as the rest of us.

This is not to disparage the concept of celebrity surrogates for political campaigns. On the contrary, there are plenty of times when a famous person’s presence on the trail can inject a campaign rally with a lot of energy. As fundraisers, some of them can tap financial resources that rival those available to Wall Street executives. And hey, if you’re going to a Bernie Sanders rally solely because you heard the guy who plays that dude in “The Big Bang Theory” is going to be there, more power to you. Stick around for the candidate’s speech, you might learn something.

Nor do I mean to knock on actors or musicians or any other famous people as being dumb. Plenty of celebrities are quite smart. George Clooney’s recent comments on the “obscene” amounts of money needed to run political campaigns were very astute, even if I don’t share his optimism that a Senate with a Democratic majority would do anything about Citizens United. And look at Al Franken, the former “Saturday Night Live” writer-turned-senator who has gained a reputation for being a thoughtful and effective legislator.

Of course the flip side to an Al Franken is Donald Trump, a man mostly famous for being famous, who has spent so much of his life in a bubble surrounded by sycophants that he is now much closer to obtaining access to the nuclear launch codes than humanity should be comfortable with. Like Robbins and others on the Democratic side, Trump has trafficked in the language of victimization by claiming that the entire race is “rigged” against him so the nomination can be stolen by the party establishment. The possibility that a majority of people might just prefer this person over that one is sometimes hard to swallow.

And herein lies the lesson of celebrities on the campaign trail, whether they are running for office like Trump or simply outspoken and high-profile surrogates like Robbins. Because they will go off the reservation with unsupportable accusations that make them look, quite frankly, like paranoid lunatics. And because Robbins is famous, he becomes a focal point around which Sanders supporters can organize their complaints. Because our society grants celebrities pride of place, his words are given extra weight. Even if they are incorrect and easily refuted.

(Note to my handlers at Correct the Record: Please send my check c/o Salon.)