After bombing Libya into chaos, NATO plans blockade to bar refugees from Europe, with U.S. help 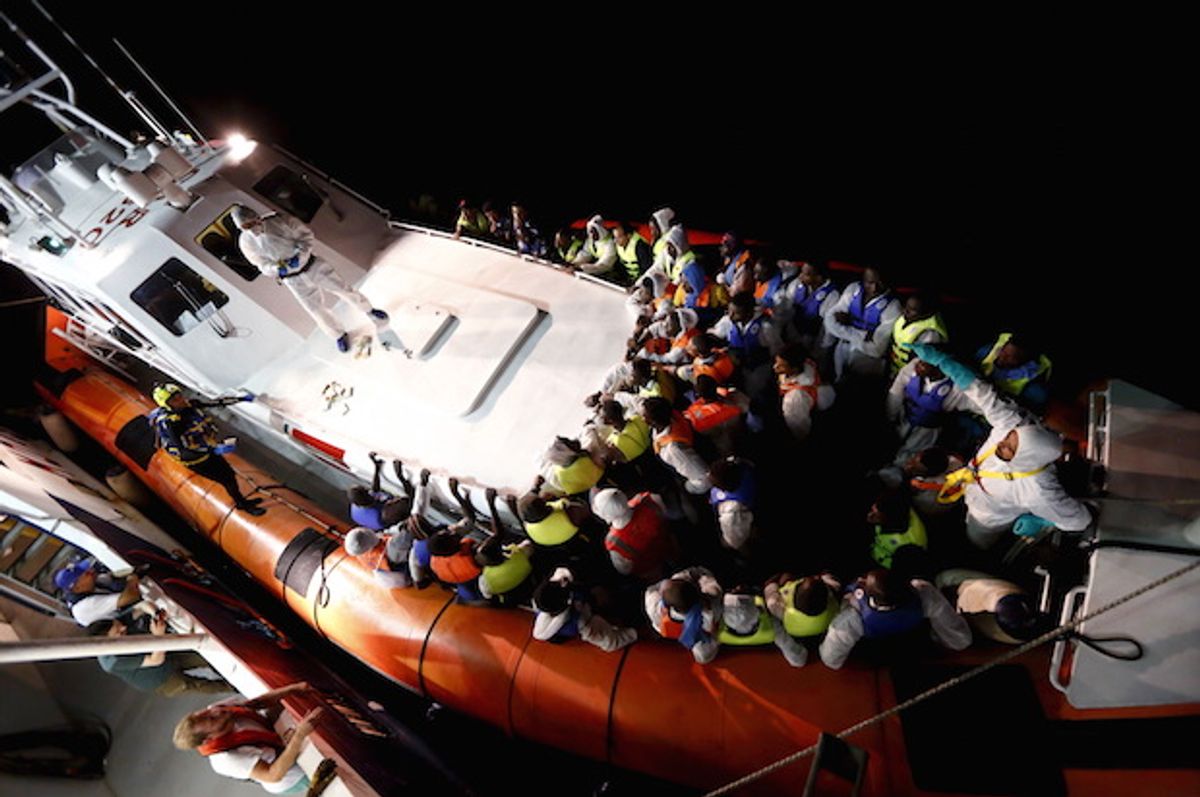 Refugees and migrants in an Italian Coast Guard vessel after traveling between Libya and the Italian island of Lampedusa, on August 3, 2015 (Reuters/Darrin Zammit Lupi)
--

Five years after bombing Libya and effectively destroying its government, NATO has declared plans to impose a naval blockade on the North African nation in order to prevent refugees and migrants from entering Europe.

After a meeting of the heads of state of the U.S., U.K., France, Germany and Italy, the White House released a statement saying the Western leaders urged NATO and the E.U. "to draw on their experience in the Aegean to explore how they could work together to address in an orderly and humane way migrant flows in the central Mediterranean."

NATO is already patrolling the Aegean Sea between Greece and Turkey for refugees and migrants fleeing violence in Syria, Iraq, Afghanistan and elsewhere.

According to Merkel, President Obama assured European leaders the U.S. is "prepared to also take responsibility with regard to the migration route from Libya to Italy if necessary."

An estimated 350,000 people have set sail from Libya to Italy since the beginning of 2014. Many are fleeing the violence that has roiled the oil-rich North African country since the 2011 NATO war that killed former dictator Muammar Qadhafi and plunged the country into chaos.

In response to this mass migration, the E.U. created the European Union Naval Force Mediterranean, or EUNAVFOR Med, also known as Operation Sophia.

The E.U. says the program was created to "fight human smugglers and traffickers," but rights experts say this is a deceptive excuse for Europe to reject refugees and migrants who, under international law, likely have legitimate grounds to apply for asylum.

"There's no way that Libya even comes close to being a viable partner through which you could say that asylum-seekers could be returned there without thorough examination of their claims in the European Union," Frelick explained.

This is the model that is being used to justify returning refugees to Turkey. At Human Rights Watch, experts already "challenge vehemently and completely disagree with" this assessment on Turkey, Frelick said, "but with regard to Libya, it's hard to imagine there being any discussion or any difference of interpretation whatsoever."

"I don't want to get Turkey off the hook here, but Libya, by no stretch of the imagination could anyone reasonably argue that this is a safe country or a country that wouldn't expose returnees to inhuman or degrading treatment," the Human Rights Watch official said.

In Libya, you "barely have any kind of central authority that you could nominally point to as a partner," he added, stressing that refugees there could not in any way be assured the protections they are guaranteed under international law.

In the years since the disastrous 2011 NATO war, a brutal civil war has waged on in Libya. Thousands of people have been killed, hundreds of thousands have been displaced and there is no functioning government in much of the country.

Rival militias control various parts of Libya, and extremist groups have carved out large swaths of territory. ISIS has established in the North African nation its biggest self-proclaimed caliphate outside of Iraq and Syria.

NATO says it is working on combating the influence of ISIS and other extremist groups in Libya, but is also simultaneously working to prevent refugees and migrants from leaving the country for Europe.

Frelick cited the 2012 so-called Hirsi cases, in which the European Court of Human Rights ruled that Italy could not return Somali and Eritrean migrants to Libya because they would be exposed to inhuman or degrading treatment there.

At the time of this ruling, Libya was not party to the U.N.'s 1951 Refugee Convention (it still is not), and the situation for refugees and migrants was already bad.

Since then, "that situation has gotten worse, if that's imaginable," Frelick said, "with militias running around and detention centers being operated without any sort of central authority."

"We continue to get harrowing reports of very abusive treatment of people at the hands of traffickers and other elements there," he added, noting that Libya today "has no refugee law and no prospects that they can provide anything remotely like effective protection to people."

NATO claims it is carrying out the plan in order to stop human trafficking, but the rights expert says this is misleading.

In the majority of cases, particularly in the Aegean, but also in the Mediterranean, it is smuggling that is occurring, not human trafficking, Frelick explained.

"They are suggesting that they are doing this as a humanitarian act," he told Salon, but it is not. This is often exactly what the refugees and migrants want: they pay to be smuggled into Europe because they are fleeing violence in their home country.

"What the NATO operation fails to consider is why they are leaving in the first place and what they would be returned to," Frelick said.

"Violating the spirit of the law"

NATO and the E.U. are also using another form of spin to legally reframe their plan, the Human Rights Watch official noted.

The U.N.'s International Covenant on Civil and Political Rights prohibits non-refoulement — that is, returning people to places where they could be subjected to inhuman or degrading treatment.

Any vessels operating under NATO auspices is therefore be bound not to return people to places where they would face risks to life and freedom, torture or inhuman or degrading treatment.

If NATO vessels are operating in Libyan waters, nevertheless, non-refoulement would not apply, because the Libyans would technically not have left their country, and would not legally be returned to the place they didn't leave.

There is a legal distinction between the two, "even though the impact would be exactly the same," Frelick explained.

This is why NATO and the E.U. are "really champing at the bit to get into Turkish and Libyan territorial water and partner with the Turkish and Libyan coast guard, because it gets them off the hook, in terms of the way the courts may look at this," he said.

Frelick continued: "It's challenging, because it's frustrating for us as a human rights organization that looks at the people who are harmed, and see these harms occurring, and yet the tools that we have are largely legal tools."

"You can see the midnight oils burning in Brussels and elsewhere to figure out, 'How do we get around this one?'"