“This was a sketch that Amy personally felt really strongly about” 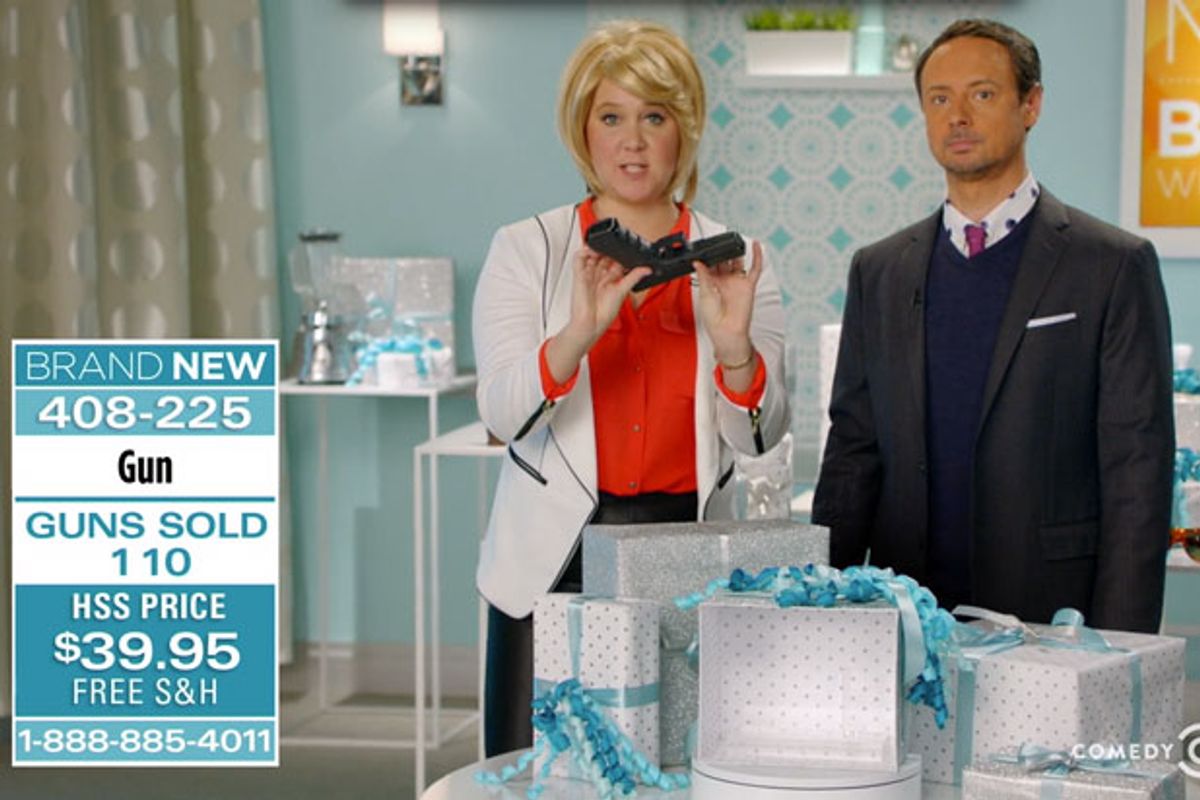 It's no secret that the mass shooting at a showing of "Trainwreck" in Louisiana last summer has left an indelible impact on Amy Schumer. The star recently revealed that she was overwhelmed with guilt shortly following the incident where two women were killed and several others injured before the shooter eventually turned the gun on himself.

But while Schumer's Comedy Central hit may have kicked of its fourth season with what Salon TV critic Sonia Saraiya describes as "one of the weakest episodes of 'Inside Amy Schumer,' period," a newly released preview of the season's second episode is everything we've come to love about Schumer's direct comedy.

“This is a gun,” a chipper Schumer explains while brandishing a weapon in a HSN/QVQ style sketch. “Just your regular, run-of-the-mill, meat-and-potatoes handgun. Now how cute is that?”

Comedian Kyle Dunnigan, who plays Schumer's home-shopping co-host, adds, “It’s like a toy but it’s extremely real,” to which Schumer proclaims, “Here is what’s great about this: Pretty much anyone can purchase this!”

On the lower third of the screen, a series of changing messages mock America's lax gun laws.

"If you're mentally ill, you'd be mentally ill not to give us a call," one message reads on screen as the mock HSN-style guns sold ticker rises. The onscreen number actually (1-888-885-4011) connects to Everytown for Gun Safety, the largest group working to fight gun violence in the U.S., which connects callers to their local congresspeople.

A few callers eventually dial in to inquire about purchasing a gun, and despite revealing rather glaring red flags, learn they too can purchase a gun from Schumer's "gun show."

“Oh no, I could never get a gun. I have several violent felonies,” a caller says.

“You bite your tongue, you silly goose,” Schumer chides. “You could absolutely get a gun if you have several felonies, as long as you buy it on the Internet or at a gun show.”

“No one can tell you that you don’t have a right to buy a gun in this country you’re trying to destroy!”

Schumer’s character continues to remind "all the parents at home" that guns "make perfect stocking-stuffers. For as young as — it doesn’t matter. These are great for any age group,” before a siren alarms the "gun show" hosts that there's yet another mass shooting in America.

“Uh oh! You know what that means,” Schumer complains. “The government could be coming for your guns soon — like they never have, but always might!" A list of members of Congress who were recipients of gun lobby money scrolls along the bottom of the screen.

“This was a sketch that Amy personally felt really strongly about,” Dan Powell, executive producer for Inside Amy Schumer told Entertainment Weekly. “The whole writers room piped in with jokes and ideas and things like that but ultimately, this was Amy’s baby.”