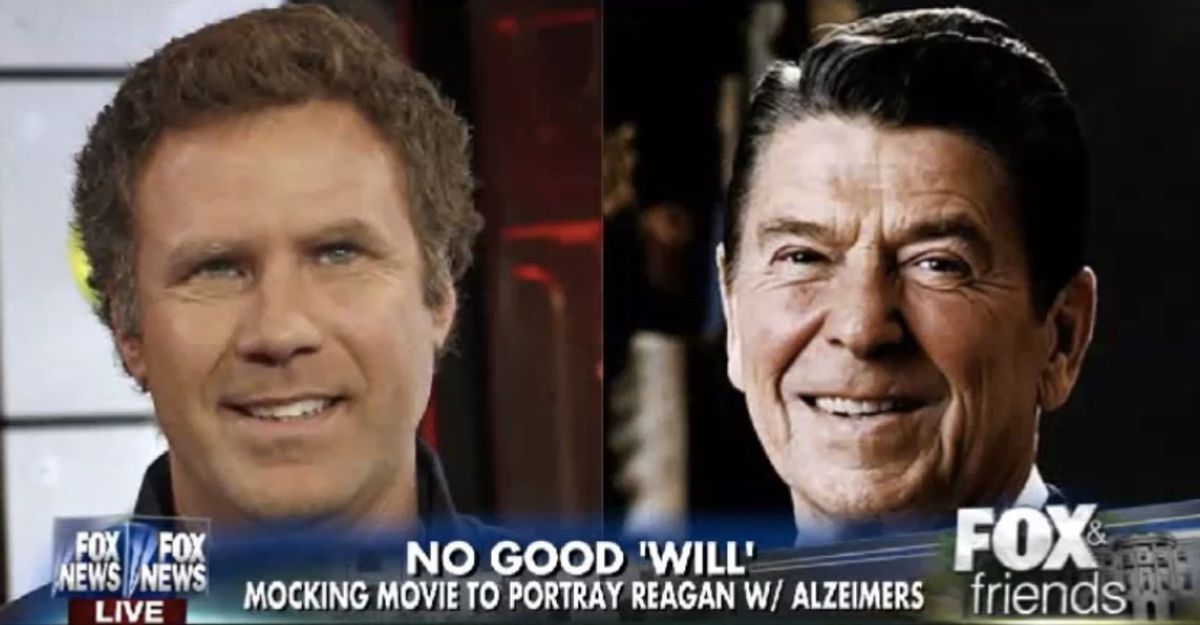 On Wednesday, Variety reported that Will Ferrell had committed to playing former president and conservative icon Ronald Reagan in an upcoming film.

If the advent of social media has taught us one thing, it's that social media is almost always a cesspool of outrage. So naturally, news of St. Ronnie finally being portrayed in a big budget Hollywood film by none other than the man who famously mocked the last Republican president on Saturday Night Live for years was reflexively condemned by conservatives on Twitter late Wednesday afternoon.

Variety's reporting that "Reagan," voted to the 2015 Black List of Hollywood’s best unproduced screenplays, was so widely regaled in Hollywood "that a live read was recently done in March starring Lena Dunham and John Cho," surely only served to further enrage conservatives: But sometimes, even reflexive conservative outrage can be rooted in something other than hysteria. The report of the screenplay's premise really struck a nerve, in this case:

Penned by Mike Rosolio, the story begins at the start of the ex-president’s second term when he falls into dementia and an ambitious intern is tasked with convincing the commander in chief that he is an actor playing the president in a movie.

While there is no indication if the movie will be a comedy, Ferrell has starred in political comedies “The Campaign” and “Dick,” and has played former president George W. Bush on the Broadway show “You’re Welcome America.”

Reagan's son, Michael, tweeted that "Alzheimers is not joke ... It kills," writing that the Ferrell and the films producers "should be ashamed":

Daughter Patty posted an open letter to Ferrell, writing, that Alzheimer's is not "suitable material for a comedy":

I saw the news bulletin — as did everyone — that you intend to portray my father in the throes of Alzheimer’s for a comedy that you are also producing. Perhaps you have managed to retain some ignorance about Alzheimer’s and other versions of dementia. Perhaps if you knew more, you would not find the subject humorous.

Others on Twitter expressed a similar outrage that the former president's health would serve as the centerpiece of the film:

And the outrage wasn't just limited to just conservatives:

Writer Jon Spaihts announced "Reagan"'s inclusion onto The Black List in a video posted back in December 2015: