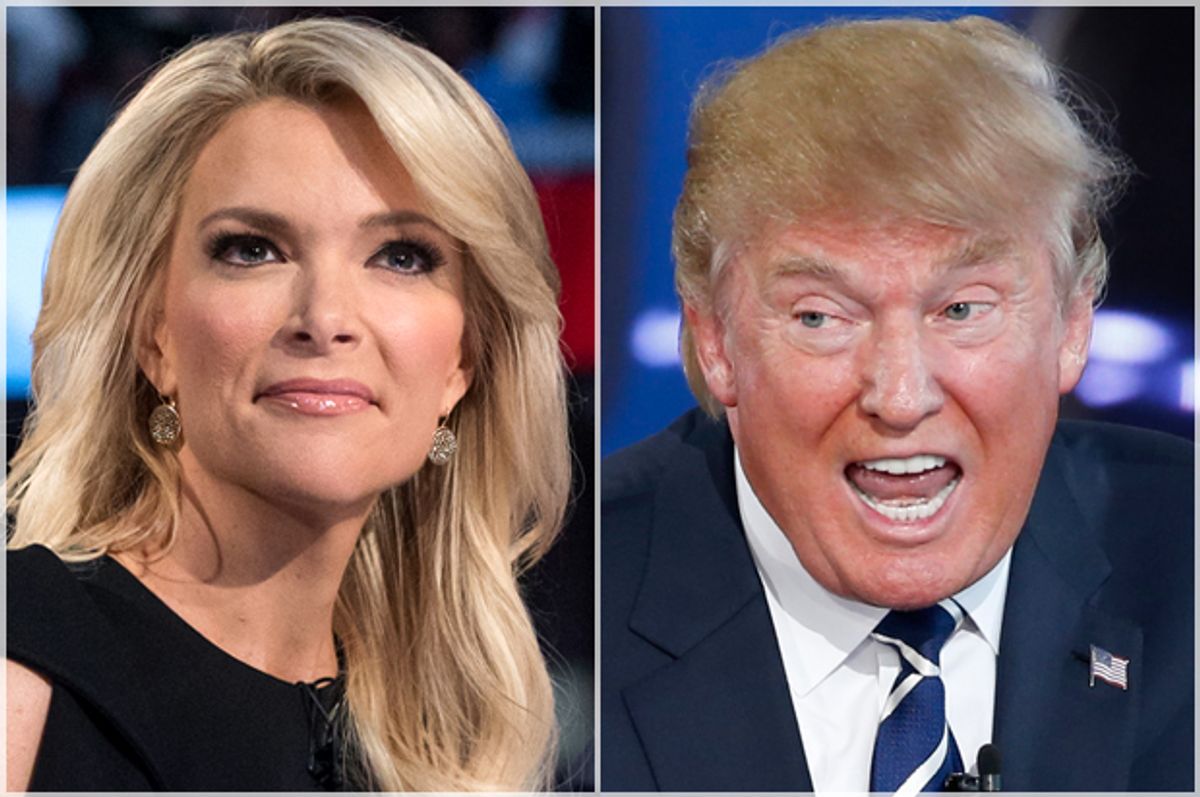 The unfolding Republican primary season, which often resembles a soap opera with its endless drama and plot twists, saw a new media chapter when Fox News announced Megyn Kelly had landed her first interview with Donald Trump since the start of their public feud last year.

Scheduled to be included in Kelly’s first prime-time Fox TV special on May 17, the sit-down came after Kelly, the target of relentless Trump insults, made a hush-hush visit to candidate’s New York City office to ask for an interview. (Kelly also reportedly asked Trump stop personally insulting her.)

The Fox News green room commotions just never end. Recall that in March, after going on a Twitter tirade in which he denounced Kelly as “crazy,” Trump announced he was skipping another Fox News debate, which led to the event being canceled. Fox News headquarters answered back, claiming the GOP frontrunner had a “sick obsession” with Kelly. But that was awkward because Fox showered Trump with nearly $30 million in free TV time from May through December of 2015. So who’s obsessed with whom?

The Fox News vs. Trump saga represents a completely dysfunctional relationship: Much of Fox loves Trump’s right-wing politics; Trump loves to bully Fox. Now the latest love/hate chapter is that Trump has agreed to sit for Kelly’s interview, which is weirdly being hyped as a major campaign showdown. (Remember when campaigns were focused on voters, not cable news hosts?)

If he behaves himself, he might come across as magnanimous as he jousts with his foe. If Kelly uses the opportunity to aggressively challenge Trump, she'll likely garner more plaudits from mainstream outlets. (The interview also comes as Kelly is negotiating a new contract and potentially leaving Fox News for a less openly partisan outlet.)

And even if Trump flops, the interview will come so late in the primary season that it will likely have little impact on the final voting tallies among Republican voters.

The only interested partisan party not celebrating? The GOP. Because for the Republican Party, the whole Fox interview spectacle represents the latest Trump-fueled mess, as the marauding Frankenstein’s monster wreaks havoc on the way to the Republican convention this summer.

Indeed, the ongoing Fox News/Trump saga represents something of a Keystone Kops production for both the GOP and Fox.

Journalistically you’d think the spectacle would be something of a negative for Fox News -- the idea of Kelly being a target of Trump’s attacks and then trying to calm the waters by visiting his office to ask for an interview in person. (Has Anderson Cooper ever done that?) But Fox signaled a long time ago that journalism and truth telling aren’t what drives their operation. It’s ratings, and whenever possible, Republican propaganda that remain paramount.

Fox cares about ratings and buzz, and most likely Kelly’s prime-time interview with Trump can deliver both, especially since much of the mainstream media positions itself as Kelly’s collective publicist, churning out endless puff pieces about her. She and Fox News can expect lots of praise for her performance.

She’s an "independent" "rising star" with a "reputation for asking tough questions to anyone,” CBS SundayMorning’s Charlie Rose recently stressed.

Note that Rose insisted Kelly’s “willingness to take on some of America's big name conservatives, quickly made Kelly a rising star" at Fox News, which makes no sense. Why would taking on conservatives at a proudly partisan and conservative network propel Kelly’s career? It didn’t.

But her strategic use of very occasional bouts of conservative pushback provides the press with anecdotal evidence it needs to push the narrative that reporters, and Kelly, were comfortable with: Journalism flourishes at Fox News!

The incident that set off the feud was Kelly publicly (and deservedly) challenging Trump on his long record of noxious comments about women at a debate last August. (He promptly freaked out.) The press accoladesbegan pouring in. She’s a “feminist icon of sorts,” with “star power” that rivals Julia Roberts, claimed Vanity Fair.

The press turned a blind eye in order to promote Kelly. But readers of Media Matters know the unpleasant truth:

She has frequently hosted an anti-LGBT hate group leader on her show, made flippant comments about racism and police brutality, and promoted conservative falsehoods about Planned Parenthood and the 2012 attacks in Benghazi, Libya. Kelly is notorious in her own right for shaming and blaming black victims of police brutality.

Doesn’t it bother journalists that they’re holding up as a newsroom paragon somebody with an ugly record of supporting race baiting and homophobia? I’m curious which groups of people Kelly has to offend before elite journalists take notice.

But none of that likely concerns her now. Kelly has her Trump interview to conduct for her star turn special, which Fox will endlessly promote, and Trump himself might even benefit from it.

It’s the Republican Party that’s left asking itself how its 2016 presidential campaign devolved into a cable news soap opera.