Ted Cruz's VP sham: He picked Carly Fiorina as running mate for all the wrong reasons 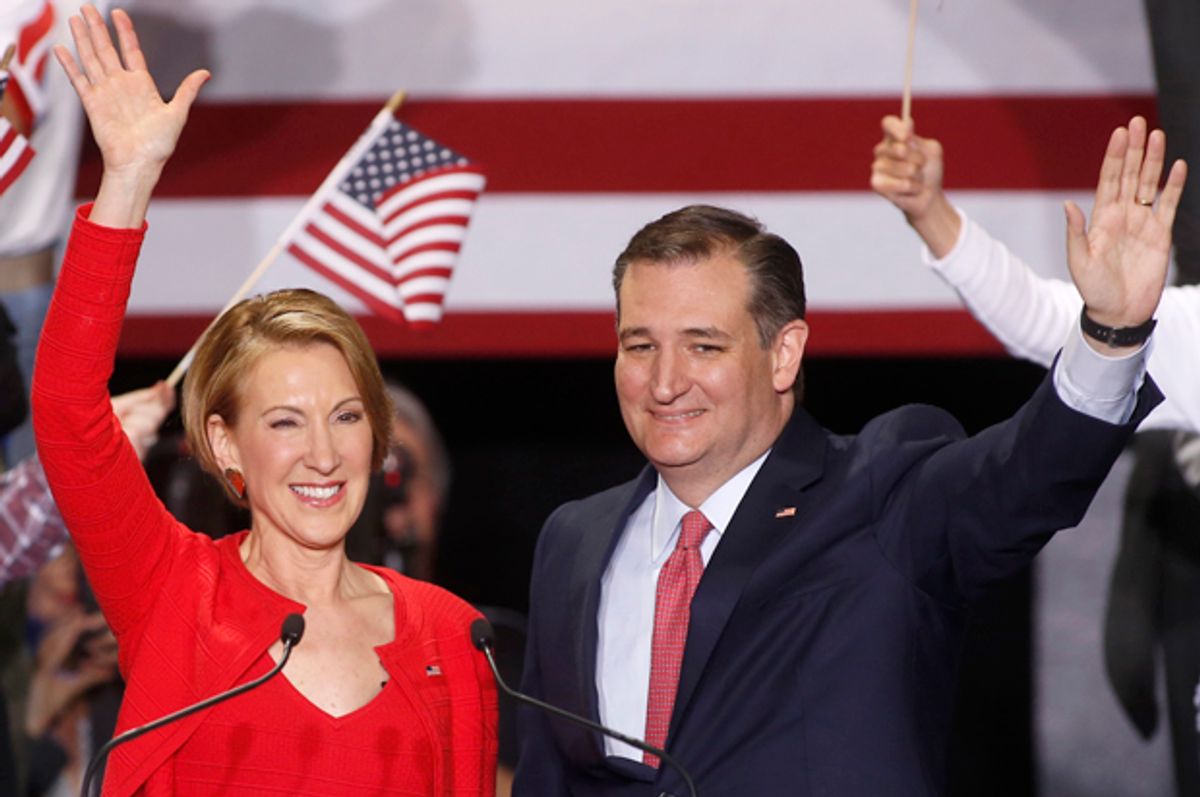 Let’s take a quick look at how Ted Cruz, the Republican Party’s best hope for derailing the candidacy of 2016 frontrunner Donald Trump, has fared over the past month. Way back on April 5 he won the Wisconsin primary in convincing fashion, taking 48 percent of the vote and kindling hope that perhaps the nominating race was entering a new phase with Cruz ascendant and Trump fading. That didn’t happen – in the weeks since, Cruz has collapsed while Trump has only gained strength. Six states have held primaries since then, and Cruz has lost all of them. In five of the six, he ran behind John Kasich, who Cruz regularly insists should drop out of the race. The strongest showing he’s had since Wisconsin was a feeble 21-percent finish in Pennsylvania. In every other state Cruz failed to clear 20 percent, and he was uncomfortably close to taking less than ten percent in Connecticut and Rhode Island.

That’s a disastrous stretch for a candidate who supposed to be the GOP establishment’s last hope and who promotes himself as a party unifier. With the Indiana primary looming and Cruz already trailing in the polls there, he needed something to break the negative cycle and give him at least a glimmer of hope. And so news broke yesterday that Cruz was going to name Carly Fiorina his running mate, even though it’s only April and he’s nowhere close to securing the nomination.

Let’s not do Ted Cruz the favor of pretending this decision was motivated by anything but desperation. The last presidential candidate to select a running mate without having actually secured the nomination was Ronald Reagan in 1976, and he only did so because his campaign was also on the brink of failing. In his long introduction of Fiorina yesterday at a rally in Indiana, Cruz tried offering alternative explanations for why he was making this decision now, but they only served to reinforce just how shallow and transparent this move is.

“When you run for president,” Cruz told the crowd, “one of the most solemn choices you make is the choice of selecting a vice presidential candidate.” It requires trust, Cruz said, and “any responsible candidate for president would have spent much time assessing possible candidates, thinking through the pros and cons, studying who these people are.” Cruz’s campaign reportedly initiated its vice presidential search two weeks ago. We learned only on Tuesday that Fiorina had submitted tax returns to the campaign for scrutiny. By contrast, Mitt Romney spent three months putting a number of potential candidates through an exhaustive screening process before selecting Paul Ryan as his running mate. In 2008, Barack Obama launched his VP search in May and ended up selecting Joe Biden in late August after an intense two-month vetting process. It fractures credulity for Cruz to argue that he arrived at this decision after having considered all the options and conducted all the proper inquiries.

“The characteristics that you look for in a vice president are indeed the very same characteristics you look for in a president,” Cruz said while hyping Fiorina. “Do they think through decisions in a rash and impulsive way? Do they pop off the handle at whatever strikes them at any given moment?” Every indication is that Cruz’s decision to select Fiorina was “rash and impulsive,” and motivated by the immediate and dire political circumstances he is facing. He used his “most solemn choice” as a presidential candidate to win a news cycle and change a campaign narrative ahead of a primary that could effectively knock him out of contention. That is an insane way for a presidential candidate to pick a running mate.

What does that say about Cruz? Does it give anyone any confidence about how he’d handle the pressures of the presidency? It could very well be the case that he thinks Carly Fiorina is capable of handling the job of the presidency should anything happen to him, but the timing of this, the obvious desperation behind it, and the frantic and transparent effort to deny the truth make Cruz look terrible. One of the chief knocks against Cruz is that he’s bloodless in his ambition and willing to do anything to secure his own political fortune. Picking a vice presidential nominee three months before the nominating convention and the day after he received a thorough drubbing that mathematically eliminated him from securing a delegate majority does a nice job of confirming that criticism.