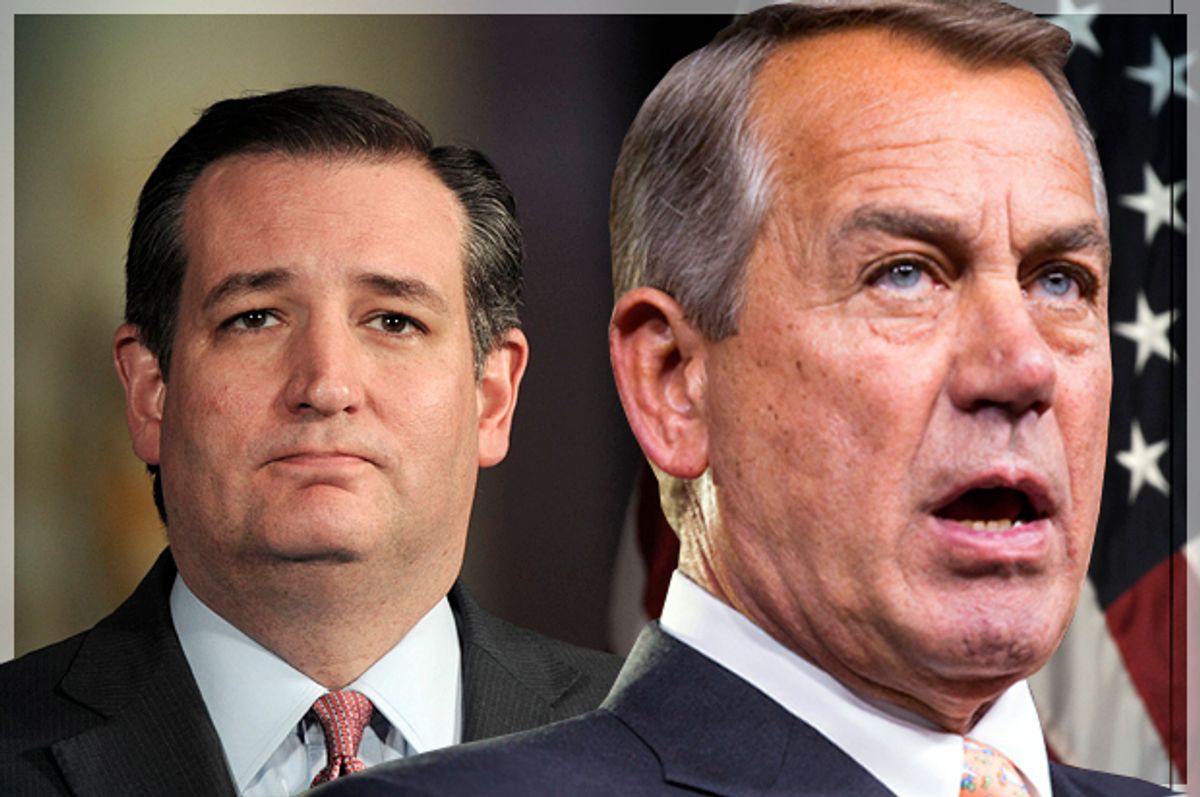 John Boehner was widely mocked during his tenure as Speaker of the House. Some of that criticism was justified, some of it not. In his defense, I'm not sure anyone could've corralled a Congress as nihilistic as this one. At any rate, one of the few services he did provide in office was to publicly identify Ted Cruz as a petulant fraud.

Last year, before stepping down, Boehner appeared on CBS's “Face the Nation” and called Cruz a “jackass” and a “false prophet.” Boehner was responding to Cruz's shutdown stunt last year, in which he stood on the Senate floor and accused his colleagues of a grand conspiracy: “I mentioned to you [his colleagues] that the votes were always cooked here. How is it that Speaker Boehner and Leader McConnell can promise that there will never ever be a shutdown? Because, I believe, Speaker Boehner has decided to cut a deal with Leader Nancy Pelosi.”

This whole spectacle, like everything else Cruz does in the Senate, was pure showmanship. A temporary spending measure was passed by a vote of 77-19 in order to keep the government afloat, a move supported by a majority of Americans, and Cruz theatrically sought a roll-call vote merely to be seen on television. What I wrote at the time still stands:

"The worst thing about Cruz isn't his obnoxiousness or his undemocratic conservatism or his dreary affectations; it's his self-promoting nihilism. What he's doing, and how he's doing it, feels unprecedented. Threatening to shut down the government or undermine the country's credit rating in defense of campaign talking points is an act of legislative terror. Cruz represents the very worst of factionalist fervor. He has no regard for the constitution or the general will of the nation's economy. He sees an opportunity to promote his brand and it doesn't matter what the costs are, to his party or his country."

Happily, Mr. Boehner stepped out of retirement on Wednesday long enough to speak at Stanford University. And he reminded us, once again, how terrible Ted Cruz is. Asked his opinion of the Texas senator, Boehner said: “Lucifer in the flesh. I have Democrat friends and Republican friends. I get along with almost everyone, but I have never worked with a more miserable son of a bitch in my life.” Boehner added that he would vote for his brother-in-orange Donald Trump in a general election, but insisted he wouldn't support Cruz under any circumstances.

That last part is illustrative. As objectionable as Donald Trump is, it's worth remembering that Ted Cruz is worse. Trump is a huckster and a clown and a hundred other things you don't want in a president, but he is at least a deal-maker, someone who won't cling to shopworn orthodoxies in the name of purity.

To be clear: a Trump administration would be an international embarrassment and an abject disaster for the country. However, there's reason to believe he would compromise and perhaps even allow people who know what they're doing to handle the important stuff. We don't really know what he'd do, but he appears flexible if nothing else.

Cruz, on the other hand, is another animal altogether. If his history suggests anything at all, it's that he'll burn everything down before he bends even a little. He's an intractable ideologue on nearly every issue of consequence. And his relentless pandering to theocrats ought to terrify anyone remotely interested preserving what cultural progress we've made in the last twenty years.

It's revealing that almost no one who knows Ted Cruz professionally likes him. Cruz has worked hard to be this hated. One of the biggest problems in Washington right now is the near-total inability for anyone to accomplish anything of note. The gridlock, the brinkmanship, the partisanship – it's made the country ungovernable for the better part of a decade. Cruz exemplifies every regressive, anti-government instinct at work in Washington.

We should thank Mr. Boehner for reminding us of that.