The fall of Ricky Gervais: How did the once-brilliant star of "The Office" end up here?

Netflix's "Special Correspondents," written, directed by, and starring Gervais, is a travesty 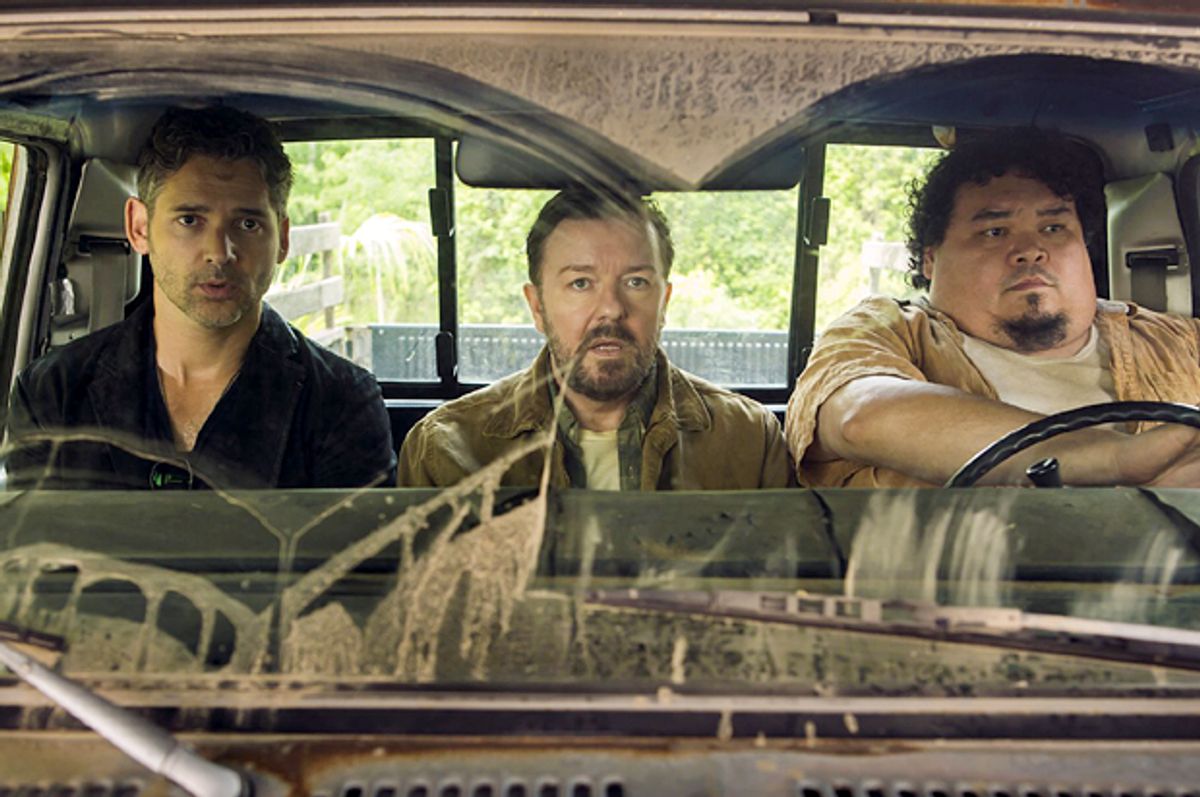 This is, in large part, the founding tenet of his humor; it is the essence of the shtick he has cultivated for the last 15 years, when he first hit the mainstream with the show he co-wrote, co-directed, and co-starred in—Britain’s “The Office,” the BBC sitcom that became shorthand for a deeply rooted dissatisfaction with the corporate world. In it, Gervais played the quintessential prat in boss David Brent—a smarmy, self-satisfied nincompoop whose head was even deeper up his arse than Michael Scott (Steve Carrell)’s on the American “The Office”’s ever was.

To wit, you at least got the impression Michael Scott had a soul, albeit one that was smothered under desperation and loneliness. Gervais’ David Brent, who oozed snakelike self-satisfaction, never gave you that impression. David Brent was the personification of what every person loathes about themselves when they inevitably succumb to the workforce—superficial, petty, and incompetent, just like the status quo he kowtowed to. Gervais’ character was disgusting for being exactly what he was told and expected to be—an office drone in the mindnumbing, fluorescently lit, Xerox-machine scored soundstage of turn-of-the-century capitalism. Yes, you hated David Brent, but you also hated yourself, and Gervais’ performance slid knifelike between you and the person you became in the workplace. No other character, no other show, better encapsulates the moral decrepitude of white, male middle management.

But in the period of time between “The Office”’s 2001 debut and tomorrow morning’s release of his new Netflix film, “Secret Correspondents,” the Gervais formula of self-loathing to brilliance has lost a lot of its luster. Gervais is still performing a character who should hate himself; though Gervais’ awkward simpering can come from a place of thoughtful critique, his horrific stumbling through transphobic jokes at this year’s Golden Globes revealed just how vicious his trademark banality can be.

Indeed, “banal” is probably the best word to describe Gervais’ latest film, “Special Correspondents,” which he wrote, directed, and stars in, with Eric Bana, Kelly MacDonald, and Vera Farmiga. “Utterly asinine” is another good modifier, courtesy of David Ehrlich at Indiewire. The Netflix film premiered at Tribeca Film Festival but is otherwise skipping theaters, debuting Friday morning on the streaming platform. It is ridiculously skippable—neither funny nor interesting nor entertaining. The plot follows two New York City radio journalists (Gervais and Bana) deployed to cover a “war” in Ecuador, who end up manufacturing most of their coverage from the spare room of the vaguely Mexican restaurant across the street from the station.

Hijinks, purportedly, ensue. The duo’s confabulations include not just “on-the-ground reporting” but an invented guerrilla leader, a subsequent hostage situation, and an array of Latino characters who are either evil, dumb, or both. Most egregiously, talented actors America Ferrera and Raúl Castillo put on thick Mexican accents to play the apparently simple-minded restaurateurs with the spare room. The joke, literally, is that they are both dumb and accented.

Let me be clear: Nothing about “Special Correspondents” is relevant or interesting about media, warfare, or human nature. The basic premise of the plot doesn’t make sense, its execution isn’t interesting, and its resolution is insulting to almost everyone involved.

But what’s most maddening is that gradually, over the course of the film’s seemingly interminable 100 minutes, it becomes clear that a foreign country’s actual war is only interesting as a backdrop to the film’s central dynamic—the one between a “loser” and a “cool guy,” and the former’s attempts to be as sexy and confident as the latter. This is the dynamic between Gervais’ character Ian, who collects Marvel figurines and plays video games (how counterculture), and Bana’s character Frank, who is perpetually clad in sunglasses and a leather jacket. Ian simpers after Frank’s effortless charisma, and when the audience is shown, early on, that Frank sleeps with Ian’s wife, it’s presented as Ian’s just desserts, for being such a weak-willed, spineless husband.

Throughout the international crises the pair kick up, this is the tension; Ian wants to be cool like Frank, and Frank just wants to continue to wear sunglasses. And because this film is so poorly written, the only character with any motivation to change is Gervais’ Ian; meaning that the whole world, and its many real problems, exist only to set the stage for a mediocre man to determine he isn’t so mediocre after all. And though perhaps self-centeredness isn’t so surprising from the character, it is alarming how little self-awareness the film has for its tepid, self-pitying character arc.

At its best, Gervais’ comedic persona is a riff on the inadvertent shittiness of the archetypal “nice guy.” But in “Special Correspondents,” that same nice guy—pathetic, entitled, and self-centered—coasts to a kinda racist, pointedly “heroic” finale. (He shoots guys, just like in the video games. Whoopee!) It’s difficult to understand how the comedian that so brilliantly lampooned David Brent, the world’s biggest loser, would need to create a film to showcase a far less funny or convincing one from the horror of being married to Vera Farmiga. But of course, this is the problem. Gervais is the first in line to lampoon his weight, his looks, his voice, or his talent. But the other side of focused self-hatred—the other side of this careful shtick—is self-regard, and Gervais has fallen right into that trap. The comedian has not evolved an iota, and that does not create an interesting body of work.

It’s difficult to imagine Gervais’ work being at more of an all-time low. To be sure, much of Gervais’ best work happened alongside “The Office” co-creator Stephen Merchant (the two comedians have since pursued projects independent of each other). But there’s also just a lack of self-awareness at play. Lately, one of Gervais’ new gigs is shilling for Verizon Wireless; with his characteristic shambling delivery, he tries to pick apart the flawed boasts of their competitors. He doesn’t say “Verizon” did these analyses, though, or that “the company” ran these comparisons. Instead, with perfect office-drone, middle-management mentality, he says—almost proudly—“we.”