A few short weeks ago, the party was doing anything it could to defeat him. Now they're applauding 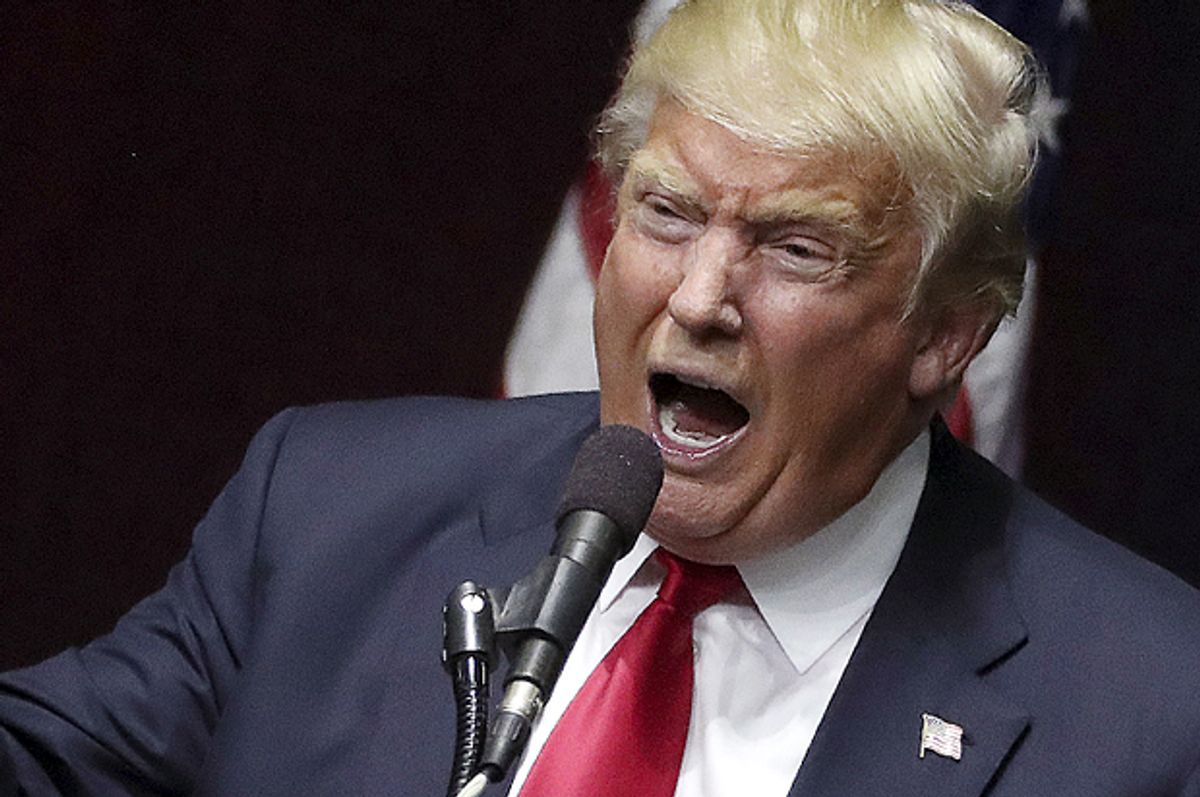 My internet browser crashed three times early in Donald Trump’s foreign policy speech on Wednesday, which made me wonder if it had become sentient and suicidal. No more Trump! I imagined it screaming at me from deep inside the hard drive. You’ve been making me listen to him for almost a year! Enough!

Unfortunately for my poor overworked browser, our nation, and all of humanity, Trump will be with us for a while longer. In the wake of the primary victories on Tuesday that all but sealed the nomination for him, the real estate developer presumably wanted to start burnishing his credentials as a foreign policy thinker. Wednesday’s speech, billed as a “major” address, was supposed to introduce us to a serious Trump, a statesmanlike Trump, the polar opposite of the man who has spent the last 10 months doing an impression of the most racist carnival barker to ever hawk his wares on a midway. He would even read the speech off a teleprompter, something he has only done once before! The cognitive dissonance for conservatives who still find teleprompter jokes at President Obama’s expense hilarious must have been unbearable.

The speech started off as a nostalgic spin through every dumb foreign policy criticism the right wing has leveled at Obama for the last seven years. The president, and Hillary Clinton, refuse to say “radical Islam.” Clinton lied about the Benghazi attack that killed our ambassador to Libya, blaming it all on protestors having been angered by a YouTube video. He even revived the old wingnut taunt about the 2016 Summer Olympics being awarded to Rio despite the president having flown to Denmark to pitch his hometown of Chicago as the host.

(It’s a measure of how many dumb complaints the right has come up with over the years that I had completely forgotten that last one.)

Calling this speech an incoherent mess seems almost too simple. It was a Frankenstein’s monster of disjointedness, with bits and pieces of neoconservative ideology, isolationism, jingoism, and conventional wisdom dredged up from the fever swamps of the RedState comments section, understandable only to those who speak fluent wing-nut, all of it grafted onto Trump’s paternalistic, outer-borough tough guy shtick. For example, I challenge anyone to read this passage without hearing it in the voice of Don Corleone:

And if you had come to me in friendship, King Salman bin Abdulaziz bin Saud, this scum who ruined your daughter would be suffering this very day!

And because Trump and his writers swiped every idea from every contradictory attack made against the Obama administration’s foreign policy for the last seven years, the speech reversed itself almost from one line to the next, much like the Republican Party has done for the president’s two terms. One minute, Trump said that thanks to Obama, our friends and allies around the world feel they can no longer depend on the United States. In the next breath, he promised to stop nation-building and pull us out of our alliances, leaving those same allies to fend for themselves. He faulted Obama for negotiating a “disastrous” deal with Iran, ignoring the fact that the deal was made with the full participation of the other four nations on the U.N. Security Council (including the one headed by Vladimir Putin, a man Trump has claimed to admire) and Germany. He mocked Obama’s assertions that climate change are the greatest threat to our national security, ignoring the fact that the military agrees with the president.

The saddest part of the whole spectacle might have been watching Republicans dutifully fall in line. Sen. Bob Corker, chairman of the Senate’s Foreign Relations Committee, released a statement that he must have known was a lie, praising Trump for delivering “a very good foreign policy speech.” Newt Gingrich was singing Trump’s praises on Twitter (and probably back-channeling to Trump’s aides to remember him when it comes time to pick a vice president).

Actually, I take that back. Watching the Republican Party fall in line behind Trump is the most predictable part of the whole spectacle. Especially when you look at the desperation moves being flung around by his rivals on Wednesday.

Anyone who is bemoaning this election as yet another choice between the lesser of two evils needs to get a grip, and soon. The general election is almost upon us, and this traffic-cone-colored buffoon in a bad wig is going to be one of two people with a chance at actually winning it. Hillary Clinton might only be the lesser of two evils to you, but that does not make voting for her any less necessary. Donald Trump might be the transformational candidate this time around, but in his case it’s not a transformation anyone with even the slightest grip on sanity should want to see.