Yanis Varoufakis says Europe could help refugees, but instead forces Greece to "intern" and treat them inhumanely 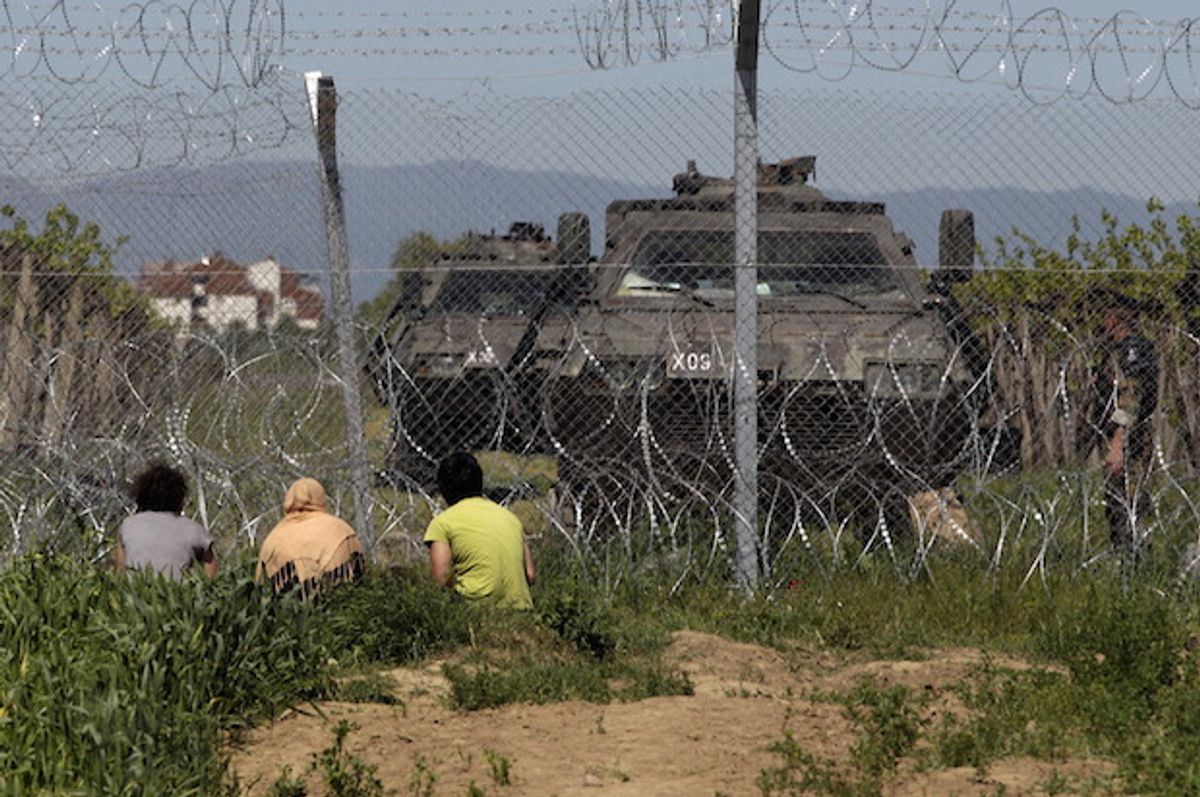 People sit next to a border fence as Macedonian police stand guard at a makeshift camp for refugees and migrants at the Greek-Macedonian border near the village of Idomeni, Greece, on April 16, 2016 (Reuters/lexandros Avramidis)
--

Greece's outspoken former finance minister says the European Union is putting refugees in what are essentially "concentration camps," and warns the festering economic crisis is exacerbating the xenophobia, fueling the rise of far-right movements.

In the past two years, hundreds of thousands of refugees and migrants have landed in Greece, hoping to find asylum in Europe.

Yanis Varoufakis, the ex-minister and longtime economics professor, said in an interview on Democracy Now this week that the E.U. has been exerting "tremendous" pressure on Greece, forcing it "to, effectively, intern the refugees."

Meanwhile, the far-right is on the rise "everywhere in Europe," and there are chilling signs of the return of fascist '30s-era politics, Varoufakis cautioned.

Many of the refugees and migrants trying to enter Europe are fleeing war, violence or repression in the Middle East and South Asia. Most are coming from Syria, Iraq and Afghanistan.

The E.U. has been overwhelmingly hostile to their arrival, even while it fuels and intervenes in some of the conflicts they are fleeing.

"George Orwell would be very, very proud of Europe and our capacity for doublespeak and creating new terms by which to hide the awful reality," he added.

"The Greek government, which is, of course, fiscally completely and utterly impecunious, is being told, 'The only way you are going to get money is if you intern them. So if you let them free and loose, even within Greece, you’re getting not a penny in order to help feed them.'"

Varoufakis also blasted the “ponzi austerity” scheme he says the E.U. and International Monetary Fund are imposing on Greece, while banks rake in billions and the Greek people suffer.

While he applauded the "magnificent array of NGOs and volunteers who are looking after the refugees," Varoufakis noted the "Greek state is in a state of disarray, because it just can’t afford even to look after the Greeks, who are suffering a seven year-long great depression."

"The Greek state is trying to do something, but is being pushed by Europe to treat inhumanely those refugees," he said.

NATO also announced a new plan this week to impose a blockade on Libya, five years after bombing the country and essentially destroying the government in the oil-rich North African nation, in order to prevent refugees and migrants from entering Europe. A Human Rights Watch official told Salon this plan also likely violates international law.

In the meantime, far-right groups like Greece's neo-Nazi Golden Dawn party are growing in popularity.

"We have a neofascist government in Hungary. We have Marine Le Pen, who’s going to top the presidential race next year in France. I mean, you just have to state this to panic," he said.

"You have UKIP, the United Kingdom Independence Party, in Britain. You’ve got Austria; in Vienna, the beautiful city of Vienna, 42 percent voted for a neofascist party in the last municipal election," Varoufakis continued.

He said the reasons behind the rise are "very simple: Great Depression, national humiliation—put them together, like in the 1920s and '30s in Germany, and you end up with the serpent's egg hatching."

Varoufakis argues there is an alternative to these detention camps, mass deportations and blockades, but Europe is not willing to take it.

"This should not be a problem. Europe is large enough. It is rich enough. We should be able to handle this refugee crisis humanely, efficiently, without this even being something we discuss," he said on Democracy Now.

After the Soviet Union dissolved in 1991, Varoufakis pointed out that Greece, a country of 10 million people, accepted 1 million refugees within a few months.

"Do you know what happened?" he asked. "Nothing. It was all fine. They still live there. Their kids come to the university where I teach. They are amongst some of my best students."

"And if a small, middle-, lower-middle-income country like Greece can accept a 10 percent influx of refugees in a few months and do quite well out of it and actually be stronger as a result of that, Europe, which is aging pathetically, should accept these refugees, like Angela Merkel initially said in September, October."

Varoufakis concluded the interview warning that Europe is seeing the terrifying signs of a resurgence of fascism.

"The European Union is disintegrating under its postmodern 1930s," he said. "This is what we’ve been experiencing the last 10 years due to the economic crisis."