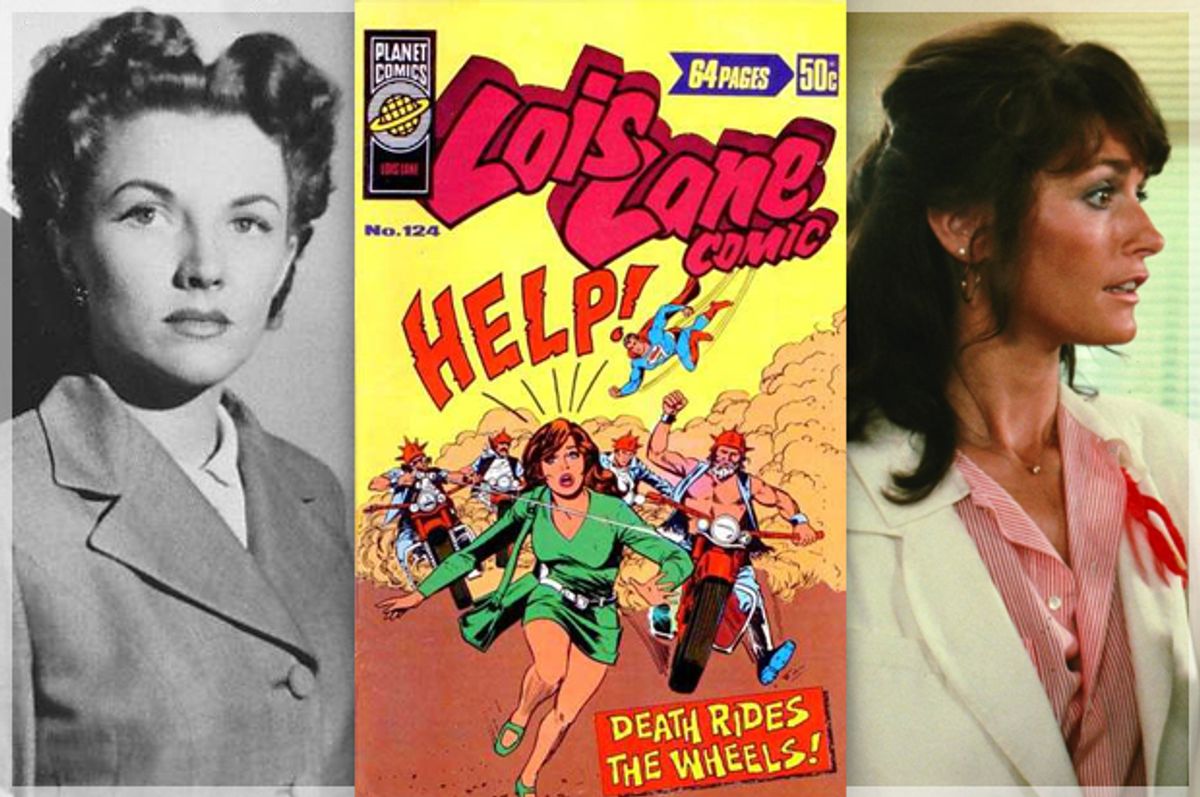 Lois Lane has been around as long as Superman, but she hasn’t had as easy a time. While the Man of Steel has had his difficulties—including his current ridiculous portrayal in Zack Snyder’s movies—ol’ Kal-El hasn’t been defined by ludicrous love stories, treated like an annoying pest who should be spanked, and killed repeatedly just to make another character sad. As recounted in Tim Hanley’s excellent recent book “Investigating Lois Lane: The Turbulent History of the Daily Planet’s Ace Reporter,” Lane’s ups and downs have been numerous and cyclical, and they mirror the struggles of real women. Tellingly, the biggest strides for this character have taken place outside the boys club of comics entirely, especially in Gwenda Bond’s young adult novel “Fallout,” which focuses entirely on Lane and has a sequel, “Double Down,” coming out May 1.

The progress of Lois Lane as a character should sound familiar: one step forward, three steps sideways, two steps back, a giant leap now and then, etc. As Hanley describes in his extremely well-researched book, her journey is a zigzag through almost 80 years of American history, involving a parade of comic book editors and creators—nearly all male. Her first appearance back in Action Comics #1 (also the first appearance of Superman) showed ambition and intelligence, but she spent years as a damsel, buzzkill and plot device. While Lane started as a sob sister (an actual title for a writer who responded to letters from the “lovelorn”) and gradually made her way to the front page of “The Daily Planet,” it was much harder for the character to get her own spotlight. Even when there was a Lois-centric comic, it had a diminishing title, like “Superman’s Girl Friend Lois Lane.”

The most preposterous of many preposterous things involving Lane may have been when a slew of letter writers in the early 1960s called for Superman to spank the pesky reporter. Yes, you read that correctly: actual letters were written demanding a “super-spanking” for an adult woman. As Hanley points out, it’s not just that Superman readers were jerks who infantilized women: the stories themselves put her in a position where readers would be annoyed by her, mostly because of her repeated attempts to prove Superman was really Clark Kent. Lois did get spanked by Superman indirectly at one point—by one of his robots—but the real culprits were oblivious writers.

Many advances for the character seemed to happen by accident, as Hanley recounts. Strong portrayals on TV and in movies, by Phyllis Coates and Margot Kidder, respectively, made a difference. Since Lane was constantly putting herself in danger, often for a story, she became defined by her bravery. Also, as the Sixties progressed, DC began to embrace serialization, getting away from single-issue stories and building longer plots similar to those of rival Marvel. This led to some positive changes for Lois, since in a heavily serialized story there has to be some progress, even if the reset button gets hit in the end. Superman started treating Lois with more respect, and since he stopped infantilizing her, readers stopped calling for her to be super-spanked.

A perfect example of the continual progress/regression of Lois Lane was the brief tenure of Dorothy Woolfolk as editor of DC’s romance line in 1971. This included the Lois Lane solo comic, and Woolfolk pushed Lois and her world in the direction of feminism. Instead of being hamstrung by the boys club of the Daily Planet, Lane went freelance. She was surrounded by other strong female characters; this might be the first era of superhero comics that would pass the Bechdel test. Woolfolk was fired for supposedly being frequently late, but as Hanley explains, there’s no evidence of her being bad at her job, and it’s more likely she lost her job due to “her take-charge, staunchly feminist attitude not sitting well with the old boys’ club that ran DC.” The real-life DC office appears to have been even less women-friendly than that of the Daily Planet.

Lois Lane has survived World War II, the Vietnam War and 9/11, but it’s been harder to escape the shadow of Superman. While her journalistic career has gotten progressively more successful, she’s also had a tendency to die: By Hanley’s count, Lane died eight times during a six-year-period in the early 2000s, proving a perfect example of Gail Simone’s “women in refrigerators” idea, in which female characters perish so male characters can suffer. Fittingly, Lane has made the most progress in a totally different medium: the young adult novel. Gwenda Bond’s 2015 novel “Fallout” reinvents Lane as an Army brat and Metropolis newbie who doesn’t have to stand in the shadow of any doofus in a cape.

While “Fallout” is in many senses a departure, it’s also consistent with the Lois Lane who’s been present (and repressed) since the beginning. As Hanley notes, “She was tough, she was ambitious, she was fearless, and she had very little respect for authority. Through every reboot and adaptation, these basic facts have remained the same.” In fact, Lane retains these qualities even when she’s been transformed into another character entirely.

One of the better recent Lois Lane stories in comics isn’t even about Lois Lane. Over the years, there have been many Superman analogues meant to pay homage to or satirize Superman—these include Hyperion, Apollo, Omni-Man, the Homelander—and Supreme. Supreme wasn’t much of a character when he was created by Rob Liefeld, but he became a celebration of everything great about Superman during a run by Alan Moore. Recently, in the series “Supreme Blue Rose” by Warren Ellis and Tula Lotay, Supreme is barely there; it’s all about Diana Dane, the Lois Lane analogue. This Lane-like character is a journalist and investigator, and everything is seen through her eyes (and the gorgeous art of Lotay). It’s a refreshing series that DC could learn from, and maybe they will; as part of their umpteenth reboot, "Rebirth," there will be a new “Superwoman” series starring Lane.

Long-running characters like Lois Lane have a life of their own. Comics writer Grant Morrison has made some points about Batman that apply to Lane as well: “I love the fact that you can delve into a fictional character like this and get so much depth and so much history. He’s kind of alive. He’s been around longer than me and he’ll be around when I’m long gone, so he’s kind of more real than me.” In the same way, Lois Lane is more real than you or me, which is oddly comforting. She’s had to deal with a lot of crap, but she’s a survivor who might do anything in the future.