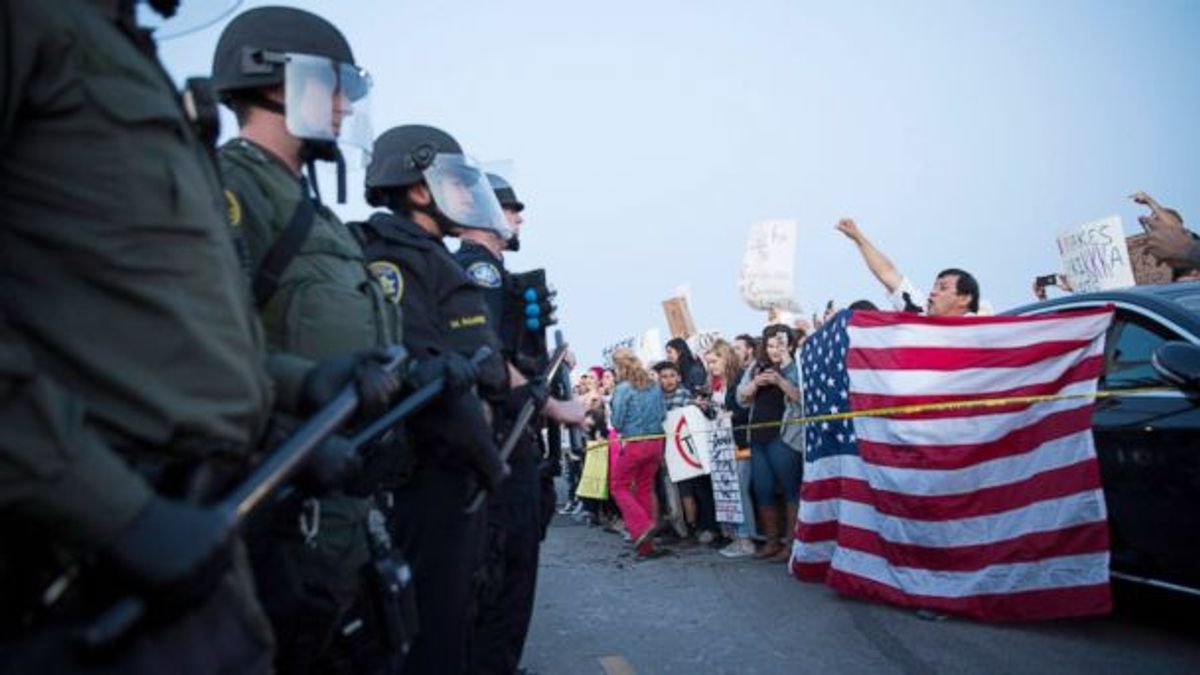 Chaos broke out outside of a massive Donald Trump rally in Orange County, California, Thursday night.

The unrest erupted outside the Pacific amphitheater where Trump staged his first campaign rally in America’s most populous state at the Orange County Fair & Event Center in Costa Mesa.

According to ABC News, closer to 18,000 Trump supporters gathered inside as the Republican frontrunner gave the Golden State a tailored spin on his controversial campaign of xenophobia, parading a host of California families whose loved ones had been killed by undocumented immigrant in California and reaffirmed his pledge to build a giant border wall only miles away from the U.S.-Mexico border.

"Trump is here to save us all,” said Jamiel Shaw, Sr., whose 17-year-old son Jamiel Shaw, Jr., was killed by an undocumented immigrant in 2008.

Outside, thousands more flooded the streets in protest of Trump and things quickly turned violent in the heart of the state’s biggest Republican stronghold, as the Associated Press reported:

Dozens of cars—including those of Trump supporters trying to leave—were stuck in the street as several hundred demonstrators blocked the road, waved Mexican flags and posed for selfies. Police in riot gear and on horseback pushed the crowd back and away from the venue. ... The crowd began dispersing about three hours after the speech ended. …

Earlier in the evening, a half-dozen anti-Trump protesters taunted those waiting to get into the venue. Trump supporters surrounded one man who waved a Mexican flag and shouted "Build that wall! Build that wall!"—a reference to Trump's call to create a barrier between the United States and Mexico to stop illegal border crossings.

According to the AP, at least one anti-Trump protester scuffled with a Trump supporter who was trying to drive away from the rally, leaving the Trump supporter bloodied:

A vehicle was spotted spinning donuts in a crowd:

There were no major injuries and about 20 people were arrested, the Orange County Sheriff's Department tweeted after the protesters had cleared.

“I knew this was going to happen,” 19-year-old anti-Trump protester Daniel Lujan told The Los Angeles Times. “It was going to be a riot. He deserves what he gets.”

"We could be peaceful and do things different,"  Arianna Perez, 19, told the Times, "but if we did, we wouldn't get our voice heard."

Trump is counting on California, a state that is nearly 40 percent Latino, to get him over the threshold of the 1,237 delegates he needs to clinch the nomination before his party’s July convention. The state votes June 7.