Paul Ryan has an idea for replacing Obamacare, and once you stop laughing I'll tell you what it is

The speaker of the House had a message earlier this week for people with pre-existing conditions: Oh well! 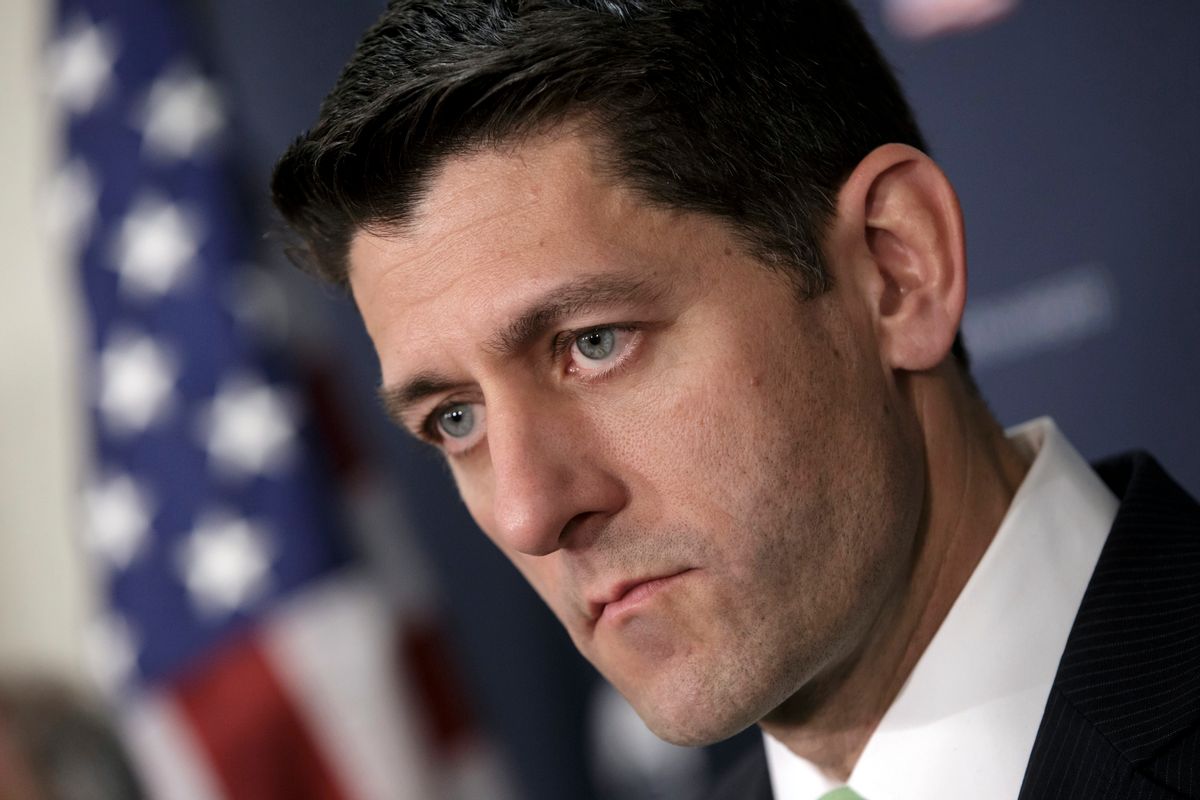 In this April 13, 2016, file photo House Speaker Paul Ryan of Wis., pauses during a news conference on Capitol Hill in Washington. Debt-ridden Puerto Rico faces a $422 million bond payment deadline May 1 with no sign Congress will act in time to help. Further complicating lawmakers efforts to steer the U.S. territory away from economic collapse are ads airing nationwide that claim the legislation amounts to a financial bailout even though the bill has no direct financial aid. House conservatives have latched onto that argument, making it difficult for Ryan, to garner support for the bill. (AP Photo) (AP/J. Scott Applewhite, File)
--

If it is a day ending in “y,” Speaker of the House Paul Ryan must be pretending the Republican Party is about to unveil its alternative to Obamacare. And only six years after Congress passed the Affordable Care Act. Impeccable timing! I can’t wait for next week, when Ryan introduces his alternative to the Smoot-Hawley tariff.

Republicans have, of course, been promising to unveil an alternative to Obamacare since the bill was being written in 2009-10. This plan is always said to be just about ready for a public rollout – before the holiday recess, before the next election, before next summer. The latest target date is just before the Republican National Convention this July. At this point, how any GOP legislator can make such a promise without a reporter laughing right in their face is beyond me.

One constant of all the theoretical GOP alternative plans has been the promise to keep the parts of Obamacare that are popular with the public and do away with anything that Fox News has convinced the voters reeks of unfettered Marxism. So provisions that allow young people to stay on their parents’ insurance until the age of 26, the removal of lifetime caps on benefits, the ban on refusing to insure someone based on pre-existing medical conditions – those will all stay. The individual mandate, the subsidies for lower-income people to purchase insurance – those will be gone, despite the fact that the popular provisions are partly reliant on the existence of the unpopular ones.

Which brings us to Paul Ryan. The Speaker has spent the last several years trying to convince everyone he is a serious policy wonk who is deeply concerned about the people of America, particularly the poor and needy. This is in total opposition to his budget plans, which would strip the welfare state -- which said poor and needy Americans depend on -- like hyenas stripping a wildebeest carcass. He has been slapped around for this in the past by, among others, President Obama during a 2011 speech, and the faculty at Georgetown University in 2012.

So it was deeply ironic when Ryan on Wednesday chose a speech at Georgetown to remind people with pre-existing conditions that as far as the GOP is concerned, they can all go suck a colostomy bag.

The rule, a cornerstone of President Barack Obama's Affordable Care Act, has been praised by patient advocates for providing access to medical care for people who previously could not afford private health insurance. […]

"Let's fund risk pools at the state level to subsidize their coverage, so that they can get affordable coverage," he said. "You dramatically lower the price for everybody else. You make health insurance so much more affordable, so much more competitive and open up competition."

Ah, state-based high-risk pools, or “coverage ghettos,” as health policy wonks sometimes refer to them. This idea comes up every time Republicans talk about an Obamacare replacement, and every time, someone who doesn’t work for the Cato Institute has to remind everyone that they are a terrible idea. The short version of why is that these risk pools would be where people with pre-existing conditions, whom insurance companies usually deemed “uninsurable” in the pre-Obamacare days, could go to purchase health insurance. Because everyone in the pool is high-risk, the insurance plans would be astronomically expensive.

Because of the expense of covering groups of only sick people, people in high-risk pools would need subsidies from the government to help them purchase insurance. But Republicans don’t want to pay for that either. (They have made their position on subsidies under Obamacare very clear.) So Ryan couches his position with talk about “competition” and “free markets,” and who knows, maybe he also told the students at Georgetown gum drops will rain from the sky the day the country is freed from the burden of helping sick people afford treatment. I don’t know, I couldn’t find a transcript.

This isn’t the first time Ryan has talked about high-risk pools, but the fact that he, a Catholic, was taking this position in a speech at a university founded and run by Jesuits feels like a walk on a theological tightrope stretched over a yawning chasm. Apparently, though, his tongue didn’t turn to sulfur, so good for him.

All of this is, to an extent, just a lot of noise. The GOP will not roll out even the bare bones of an outline of a nod at an Obamacare replacement plan. Paul Ryan cannot get the House of Representatives to so much as pass a nonbinding budget resolution, let alone something as complicated and fraught as healthcare reform. He made this speech at Georgetown simply because he hopes to convince more young people to vote for Republican candidates this fall. Or maybe he simply hopes that people under 21 are the only voters in the country who have not yet realized he’s completely full of it.