Paul Ryan wants to eliminate a popular Obamacare provision and replace it with an expensive, useless pipe dream 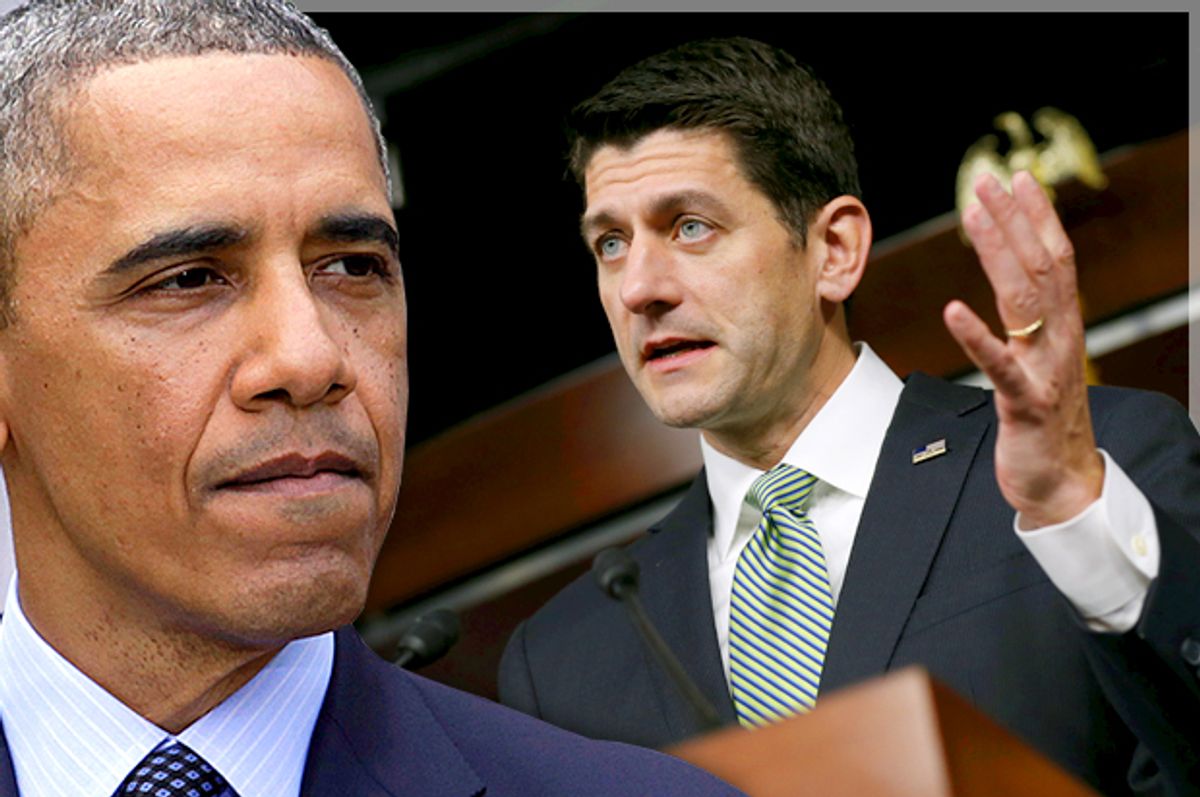 One of the biggest problems Republicans have had to deal with when it comes to health care reform is that the Affordable Care Act, while unpopular as a whole, has individual components in it that people love. Perhaps foremost among these well-liked slices of Obamacare is the law’s provision barring insurance companies from discriminating against people based on pre-existing conditions. It used to be that a health insurer could jack up your premiums or deny you coverage altogether based solely on your health history. The Affordable Care Act put an end to that as part of its coverage mandate, and now people who most desperately need access to health care can get it.

For Republicans, this popular policy is unadulterated Bolshevism. They recoil at the idea of the government regulating the insurance industry in this way, and they argue that there is a solution for guaranteeing sick people can get covered that is better than simply guaranteeing they can get covered. This better way is found within the inscrutable magicks of the free market.

House Speaker Paul Ryan is himself an ardent devotee of finding free-market solutions to literally every problem, and he also happens to be the person in charge of developing the House GOP’s long-awaited Obamacare replacement. This week, the Speaker gave us all a preview of what we can expect to see in the Republicans’ health reform plan, and he specifically addressed the issue of pre-existing conditions and how they can be dealt with in a way that doesn’t involve government regulation. Here’s what he said, according to Reuters:

"Less than 10 percent of people under 65 are what we call people with pre-existing conditions, who are really kind of uninsurable," Ryan, a Wisconsin Republican, told a student audience at Georgetown University.

"Let's fund risk pools at the state level to subsidize their coverage, so that they can get affordable coverage," he said. "You dramatically lower the price for everybody else. You make health insurance so much more affordable, so much more competitive and open up competition."

High-risk pools! If you were at all concerned that the Republican Obamacare alternative would embrace any new thinking or policy innovations, this should set your mind at ease. High-risk pools have been a staple of Republican health care policy proposals for a long time now, and enthusiasm for them hasn’t diminished despite the fact that they’re a terrible policy.

The way high-risk pools work is that if you’re one of the “really kind of uninsurable people” Paul Ryan talks about who can’t get otherwise insured because of your medical history, you apply for coverage through a high-risk pool where you’ll pay higher premiums and cover more out-of-pocket costs than you would expect to in the normal insurance market. “In addition to these high premiums,” the Commonwealth Fund explains, “enrollees in state-based high-risk pools faced annual deductibles as high as $25,000 and annual coverage limits as low as $75,000.” In dispassionate economic terms, this makes sense: your health care needs are more expensive, so you pay more than a healthy person would. But if you’re a sick low-income person who can’t really afford insurance to begin with, shunting you off into a high-risk pool wouldn’t do you any good.

That’s why state-level high-risk pools require massive amounts of government subsidies to function. One estimate (from a conservative policy analyst) found that $15-20 billion would be needed annually to cover 4 million people. Other estimates put the number as high as $40 billion annually. And that’s where this becomes a policy problem for Republicans – conservatives in Congress aren’t likely to approve anything close to that level of funding. As Bloomberg’s Sahil Kapur wrote last year, Republicans in the House have already rejected a much more modest effort to set up a high-risk pool because conservatives refused to sign off on the $3.7 billion price tag. There was a time when Paul Ryan himself criticized other Republicans’ health care proposals because they “relied on federal subsidies of high risk pools to get all Americans covered.”

But even if, somehow, the high-risk pools were to sneak past a Republican Congress that can’t abide spending more federal money on health care, they would still screw over a lot of poor, sick people. Again, from the Commonwealth Fund:

Use of high-risk pools in lieu of marketplace and Medicaid expansion coverage would result in greater state and federal costs, fewer people with preexisting conditions able to obtain coverage, and coverage that fails to meet the often greater needs of people with chronic conditions. Affording coverage would be particularly difficult for people with incomes below 400 percent of the federal poverty level, who accounted for 80 percent of the uninsured population with preexisting conditions prior to implementation of the ACA.

Hey… can someone tell me again of how much poverty warrior Paul Ryan cares about the poor?

So instead of just sticking with the popular policy that makes it impossible for health insurers to turn away the sick, Speaker Ryan wants to set up a complex and cumbersome system of risk pools that won’t cover as many sick people as Obamacare and won’t offer the same level of coverage, and has the added benefit of being so expensive that his own party will likely tell him to go jump in a lake.