"Greece is being trampled upon" says economist Yanis Varoufakis, while bankers rake in billions and poverty grows 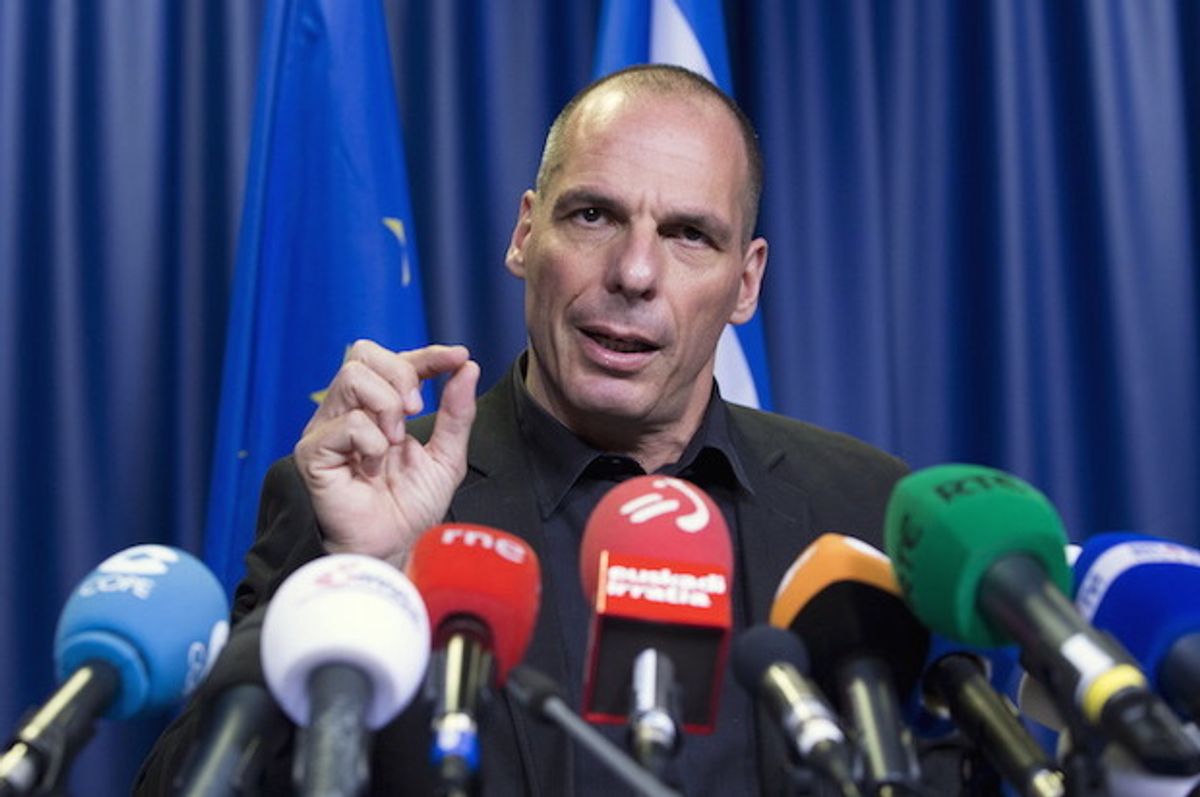 The former finance minister of Greece says the European Union and international financial institutions are imposing unjust "ponzi austerity" on his country, while banks rake in billions and the Greek people suffer.

For years, Greece has faced enormous economic hardship. In the wake of the 2008 Great Recession, the country plunged into a debt crisis. In return for large loans, the Troika — which consists of the European Commission, the European Central Bank and the International Monetary Fund — has demanded that Greece impose harsh austerity measures, cutting social services, slashing government programs and privatizing state assets.

"Greece is being trampled upon," he said in an interview on Democracy Now. Varoufakis accused the Troika of trying "to turn Greece into a desert" and condemned the past three bailouts as money-making opportunities for German and French banks.

The effects of austerity on Greece have been nothing short of catastrophic.

From 2008 to 2013, Greeks became on average 40 percent poorer. More than one-third of Greeks, 36 percent of the population, are at risk of poverty and social exclusion. Poverty is worse in Greece than it is in Latvia, and among the worst in the eurozone, surpassed only by Bulgaria and Romania.

One out of every four Greeks is unemployed, the highest unemployment rate in the E.U. Among Greeks under age 25, the problem is even worse, with roughly one out of every two people unemployed.

Despite this dire situation, in negotiations this week, international creditors demanded that Greece impose further austerity measures. The International Monetary Fund is ordering the Greek government to cut pensions and eliminate income-tax exemptions.

"A great depression, with no end in sight"

Varoufakis argues this is all part of a "Ponzi austerity" scheme.

After the financial crash in 2008, "there was a cynical transfer of private sector, private bank losses onto the shoulders of the weakest of taxpayers, the Greeks," he said on Democracy Now.

Varoufakis opposed the bailouts, which he described simply as "typical extend-and-pretend loans."

He explained: "A second predatory loan is enforced upon the Greek government in order to pretend that it is making its payments for the first loan, and then a third one, and then a fourth one. And the worst aspect of it is that these loans, which were not loans to Greece, were given, extended, on condition of stringent austerity that shrunk our incomes."

"So we entered a debt deflationary cycle, a great depression, with no end in sight."

Varoufakis blasted the distortions "peddled by the mainstream media." Many media reports claim the negotiations between Greece and its creditors have stalled because the Greek government is resisting structural reforms. Varoufakis said "nothing could be further from the truth."

"The fact of the matter is that the Greek government last summer, in July of 2015, surrendered to the creditors," Varoufakis explained. Since then, Greece "is simply told what to do. And it’s trying to do it. It is trying to implement it."

"This is why I’m no longer the finance minister," he added. Varoufakis stepped down in July when the Troika refused to budge on austerity.

The left-wing Syriza party was elected by a landslide in January 2015 on an anti-austerity platform. Varoufakis, who served as its first finance minister, says Europe and financial institutions refused to allow the Greek government economic autonomy, forcing it to continue implementing harsh austerity measures.

In July, Greeks held an historic referendum, voting overwhelmingly against austerity. Europe ignored this referendum, effectively overriding the democratic will of the Greek people.

In a statement explaining his resignation in July, Varoufakis noted that eurozone finance ministers were frustrated with his firm opposition, and heavily pressured him to leave.

"I shall wear the creditors’ loathing with pride," Varoufakis wrote at the time.

Today, Varoufakis says the reason there is another impasse in the negotiations is because the International Monetary Fund, or IMF, and the German government "can’t see eye to eye."

The IMF is frustrated with Germany, Varoufakis says, because — although it frequently supports austerity programs — it at least acknowledges that Greece's debt is ultimately unsustainable.

"They know that the numbers that the European Commission, on behalf of Germany, is imposing upon Greece are numbers that will explode, they will fail," Varoufakis explained. "In six months’ time, we’ll have another failure of the program, like we’ve had in the last six years."

The IMF wants Greece to devalue labor and pensions, to close down small businesses and replace them with large corporations, but understands that this would shrink Greece's national income, making it impossible to repay the gargantuan debt.

"They’re like a quasi-numerate villain, who wants to turn Greece into a desert, call it peace," Varoufakis remarked.

The records of an internal meeting released by whistleblowing journalism organization WikiLeaks show IMF officials asking themselves what it will take Europe to recognize that Greece's debt must be cut. They conclude that some kind of even, another crisis, is needed.

"The elephants in the room are tussling, and the little pipsqueak mouse, Greece, is being trampled upon," Varoufakis said. "It’s got nothing to do with the Greek government stalling on structural reforms."

"By the way, there are no structural reforms in question," he added. "Cutting down pensions is not reform. It’s like confusing butchery for surgery. It’s not the same thing."

The U.S. has joined in pressuring Greece to continue to implement the crippling austerity measures.

After President Obama met with German Chancellor Angela Merkel this week, White House spokesperson Josh Earnest told reporters "we're very supportive of the efforts that members of the E.U. have made to deal with the financial challenges posed by Greece’s finances."

The White House insisted Greece must follow "through on a number of structural reforms," stressing "Greece has a responsibility to do that."

In his interview on Democracy Now, Varoufakis criticized President Obama.

"We have, yet again, this typical disconnect in the American administration," he said. "It’s quite astonishing and saddening."

A Ponzi scheme is a scam in which a business pretends to grow its income by taking on more and more unsustainable debt.

In a similar fashion, the Troika has continued to impose more and more debt on Greece, which can only be used "to pretend to repay the previous debts."

"And you keep tightening that belt through more pension cuts, more reductions in public health and so on, and public education, and you keep on taking new unsustainable loans in order to pretend that you’re not insolvent," Varoufakis explained. "That’s Ponzi austerity for you."

Bailout for the banks

Varoufakis still has hope that things can be turned around, but not from within. He emphasized that much of the German people stands with Greece in opposing harsh austerity measures. Rather, it is the German government that is so insistent on continuing down the same path.

In 2015, Varoufakis launched the Democracy in Europe Movement 2025, or DiEM25, a pan-European political movement that warns "The European Union will be democratised. Or it will disintegrate!"

"The problem is not that Germany has not paid enough. Germany has paid too much, in the case of the Greek bailout," Varoufakis explained on Democracy Now. "We had the largest loan in human history. The question is, what happened to that money?"

"It wasn’t money for Greece. It was money for the banks. And the Greek people took on the largest loan in human history on behalf of German and French bankers, under conditions that guaranteed that their income, our income in Greece, would shrink by one-third."