Thanks to alternative right-wing media, Trump has thrived despite his uncomfortable relationship with Fox News 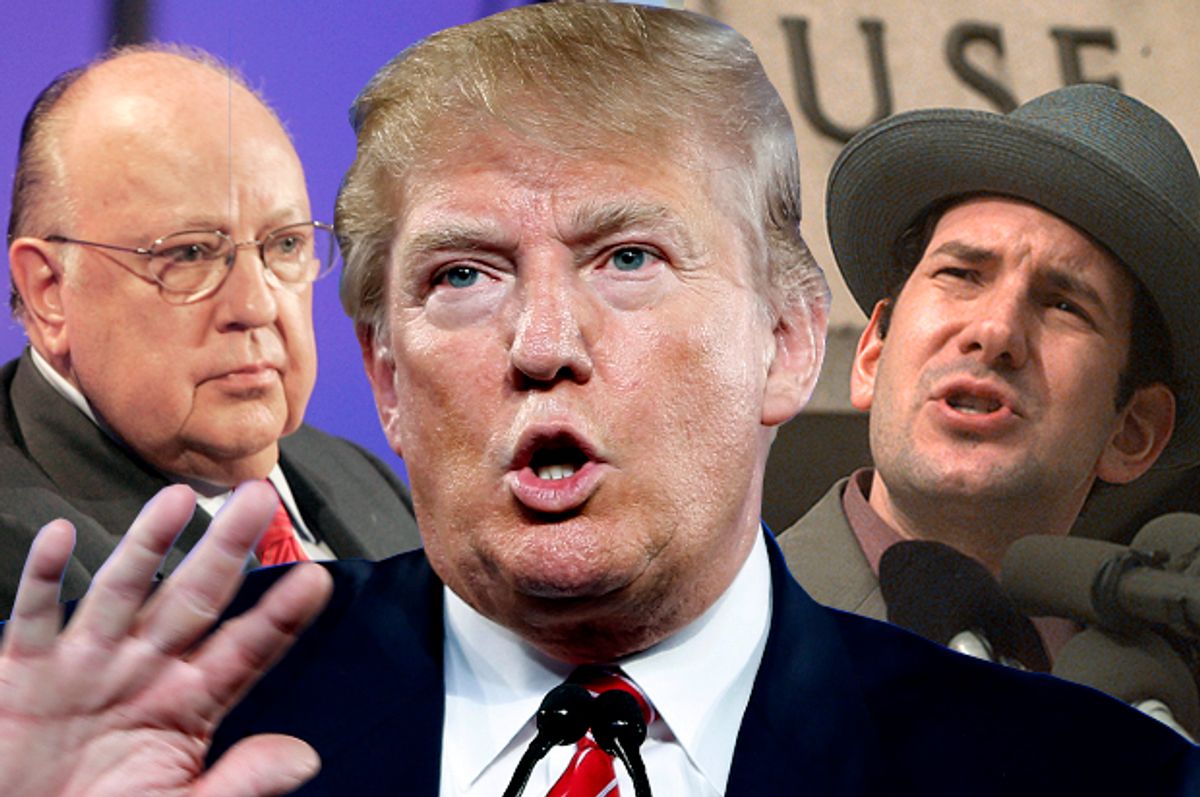 As a presidential candidate, Donald Trump specializes in overturning conventional wisdom. Before 2016, it was generally assumed that a presidential candidate needed to be, you know, presidential. But Trump has somehow come within striking distance of the Republican nomination despite insulting large portions of the electorate, buying scant campaign ads, failing to present any coherent policy proposals and being despised by his own party’s establishment. Trump has defied the inherited understanding of generations of pundits, strategists and politicians in his unprecedented bid for the White House.

Perhaps the most remarkable bit of conventional wisdom that Trump has thus far disproven is the theory that a Republican presidential candidate can't succeed without being on good terms with Fox News.

“Fox News is the uncontested gatekeeper for Republican politics and Republican politicians,” declared MSNBC’s Rachel Maddow in 2011. It was long understood that if a candidate had any hope of the party’s nomination, he or she would have to play nice with the most important voice in conservative media.

But Trump and Fox News have been in open conflict since August, when Trump attacked Fox’s Megyn Kelly for what he said was an unfair debate question about allegations of sexism. Since then, Trump has retweeted a follower that called Kelly a “bimbo,” declared a short-lived boycott on Fox, and declined to appear at a January debate on the network, among other slights. Conventional wisdom would predict that antagonizing Fox News in this manner would be a death sentence for any campaign. But Trump didn’t just survive this ordeal — he thrived. So how has Trump managed to succeed despite alienating Fox News?

One key to understanding Trump’s relationship with Fox is grasping how this year's conservative media landscape is different than in previous cycles. Fox News was once a monolithic figure within the world of right-wing media, but in recent years we’ve seen a proliferation of alternative news platforms that have established credibility with significant segments of the Republican base.

Newer conservative outlets like the Daily Caller, the Washington Free Beacon and The Blaze have joined established voices like the Drudge Report, Breitbart News and Rush Limbaugh to create a richer field of options for conservative media consumers than ever before. So while Fox  News still holds considerable sway, it's no longer the be-all and end-all when it comes to reaching Republican voters.

“The fragmentation allowed for these outlets to build up passionate, highly engaged audiences,” says Angelo Carusone, executive vice president at Media Matters for America. “Even if they’re not as big as the Fox audience one-to-one, when you add up these fragmented audiences, you have, for the first time, a counterbalance to Fox News. You have smaller, but highly energized communities distributed across digital and talk radio platforms.”

The coverage provided by these alternative outlets often runs to the right of Fox, appealing to that portion of the electorate that feels that the problem with the Republican Party is that it’s not conservative enough. If Fox’s tone appeals to the middle-of-the-road conservative Jeb Bush voter, Breitbart and Drudge are playing to an audience that hews closer to the anti-establishment, burn-it-all-down Trump enthusiast.

The Drudge Report has been one of Trump’s most important supporters. Drudge’s coverage has so favored Trump that Politico described the site as “all in” for the GOP frontrunner. Ted Cruz recently complained that Drudge “has basically become the attack site for the Donald Trump campaign.” The simple, link-heavy page is the granddaddy of online conservative news, having made its name helping to expose Bill Clinton's sex scandal in 1998. Drudge holds astonishing influence in the online sphere.

Given the number of sites that have developed small, but devoted followings by running to Fox's right, perhaps it shouldn’t come as a surprise that YouGov BrandIndex reported that Fox News Channel’s perception among Republicans reached a three-year low in February. “Fox News is not considered the conservative network that it used to be,”  Limbaugh declared in January.

Trump had the pulse of the conservative media landscape well before he launched his campaign. Starting in 2014, Trump dispatched an aide to listen to thousands of hours of talk radio and deliver reports on what resonated with Republican voters. What Trump found was that immigration — which was to become his signature campaign topic — riled based voters more than any other issue. So while Trump's early bombastic statement about Mexicans being “rapists” may have seemed improvised and ill-conceived, he had a very specific audience in mind.

Fox News had helped cultivate that audience over many years by providing a platform for hardline immigration rhetoric. “You could trace Fox’s problem back to Fox itself, in the sense that they really pushed the immigration issue, and Donald Trump has tapped into that in such way that it’s very hard for them to turn off the faucet,” says Kevin Arceneaux, professor of political science at Temple University.

If Fox News were to turn on Trump on the conservative litmus test of immigration, it would risk losing credibility with its hard-won audience. Fox’s dilemma is similar to the quandary faced by mainstream Republicans who want to distance themselves from Trump’s most incendiary statements, but fear alienating conservative voters by doing so.

Fox News chief Roger Ailes is an essential player in the drama. While Trump was beginning his ascent in the primary polls this summer, Ailes was busy fighting an internal battle to retain his power the network. Ailes biographer Gabriel Sherman reported that Ailes nearly quit his post after Fox owner Rupert Murdoch promoted his sons above Ailes. Ailes ended up staying, but is now reportedly operating from a position of severely diminished power at the network he once ran with near autonomy.

“You have a situation where Ailes has exposed himself as having a vulnerability, and Trump is aware of this vulnerability,” says Carusone. “And that is happening in the context of Ailes not being able to impose rigid discipline within the Fox empire over support for Trump.”

Ailes, newly vulnerable to would-be usurpers, couldn’t risk losing his ratings — and potentially the job he's held for 20 years — by issuing a directive to cut down on the ad-rates bonanza of Trump coverage. Trump had huge appeal for a significant portion of Fox’s viewership, but more importantly, that base now had other options to turn to for its Trump coverage if Fox News wouldn’t deliver it. Thus, Trump continued to receive a higher proportion of Fox airtime than any of his competitors, even through the most contentious days of the feud.

Additionally, Trump reportedly has a portfolio of personal dirt on Ailes, which he acquired when he stepped in to help Ailes negotiate a severance deal with a former employee. “If Ailes ever truly went to war against Trump, Trump would have the arsenal to launch a retaliatory strike,” Sherman wrote in New York Magazine. The “bombs” Trump holds may be another reason why Fox News hasn’t launched an all-out offensive against the GOP frontrunner, preferring instead to push competing candidates with increased coverage.

A significant, but oft-overlooked episode in the Trump-Fox feud, says Carusone, was Trump’s August 2015 appearance on the small conservative cable outlet One America News. Weeks after Trump’s contentious encounter with Fox’s Megyn Kelly at the first Republican presidential debate, and days after Trump escalated the conflict by retweeting a follower who called Kelly a “bimbo,” Trump agreed to an interview with Sarah Palin on the little-known Fox competitor. The interest generated by Trump’s appearance crashed the One America News website before the interview even took place.

“It was sort of a shot across the bow of Fox News,”  Carusone said. “He had never been on there before and he hasn’t been on there since. It was a clear revelation that not only was Fox vulnerable, but that Trump was able to exploit this vulnerability with his control of an audience that Fox had previously been able to captivate.”

Trump was able to threaten Fox where it mattered — viewership. In past election cycles, presidential candidates needed Fox’s coverage to reach conservative voters. With his knowledge of Ailes’ vulnerabilities and the ability to reach his supporters without Fox, through alternative conservative outlets like One America and Drudge, Trump was able to use his leverage to flip the script. Ailes and Fox came to need Trump, and kept covering him despite his antagonism.

So why did Trump continue getting a certain measure of positive coverage on Fox News, even as he publicly railed against Kelly and the network for months? Though Fox rightly defended its star anchor throughout the dispute, Ailes never hit back with the wrath one might have expected.

It's possible that Ailes' whip power was no longer strong enough to enforce a strict anti-Trump company line without inviting mutiny. Alternatively, Ailes may have calculated that if Fox truly took off the gloves, it would permanently alienate the Trump-supporting segment of Fox's viewership— a sizeable audience Trump would be all too happy to bring with him somewhere else.

If nothing else, Trump understands leverage, and he had plenty of it during his war with Fox.

Even if Fox wanted to launch a head-on anti-Trump campaign, it might be futile. “In some ways, Trump is a person who demonstrates the limitation of the news media to change or influence people’s minds,” said Kevin Arceneaux, professor of political science at Temple University. Arceneaux explains that the media is powerful in reinforcing consumers’ preexisting opinions and in shaping opinions on unfamiliar issues, but it struggles to influence voters once they’ve made up their minds. And Trump voters have certainly made up their minds about Trump.

“Once people have an opinion, it’s often hard to change that opinion, especially if it’s something they want to keep believing,”  Arceneax said. “So if Fox News says ‘You shouldn’t think that,’ rather than changing viewers opinions about Trump, they’re more likely to either ignore what Fox is saying or change their opinion about Fox News.”

The big winners in this scenario, aside from Trump, are pro-Trump Fox alternatives like Drudge and Breitbart, which are helping to intensify support among Trump backers while at the same time helping their bottom lines by drawing Trump-fueled web traffic.

It remains a mystery whether 2016 will come to signify a permanent decline in Fox’s status as Republicans' primary gatekeeper, or if this campaign will be looked at as a one-time aberration unique to the bizarre phenomenon of Donald Trump.

“We’ll have to wait and see,”  Arceneaux said. “We may see other candidates try to emulate Trump’s strategy, which doesn’t mean they’ll be successful at it. It has, in some ways, pointed out not so much that the emperor has no clothes, but that maybe the emperor is not fully clothed. There are other ways to go about this than just bowing down at the altar of Fox News.”