They're not more likely to molest children, she said, so "What was the fear that necessitated this law?" 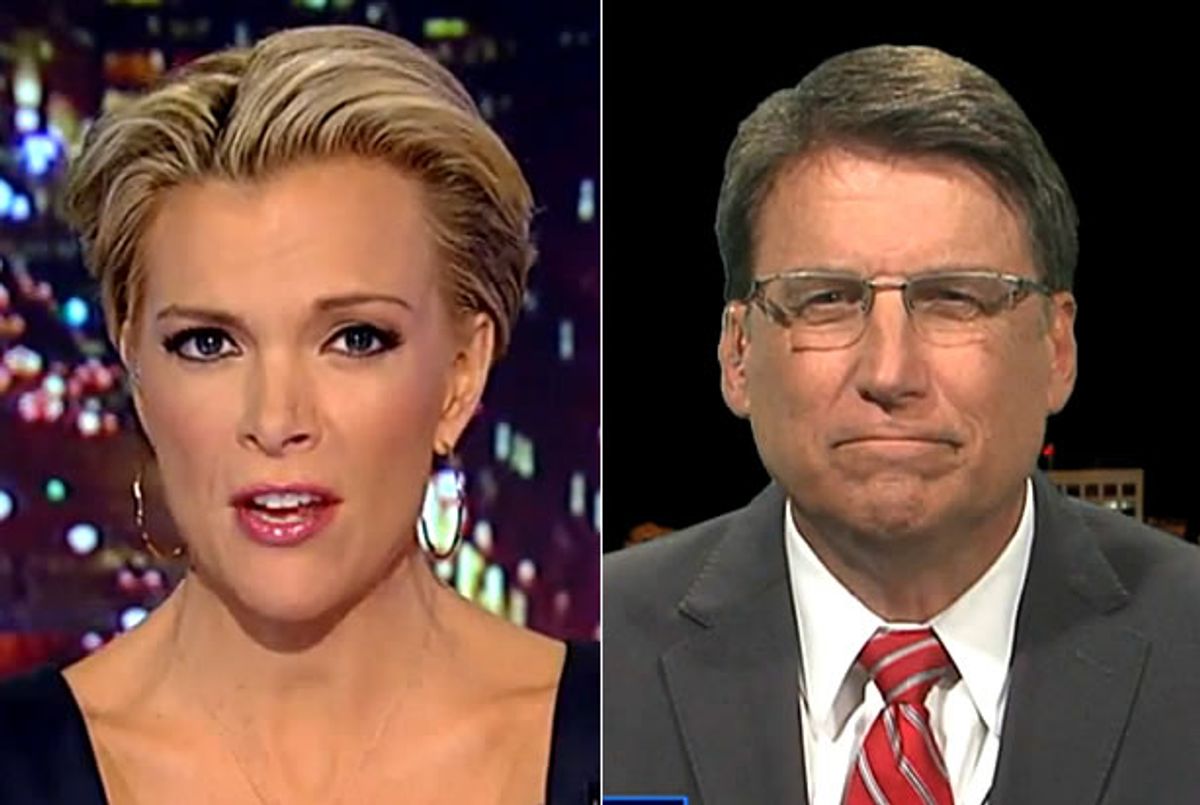 On The Kelly File Thursday night, host Megyn Kelly provided North Carolina Governor Pat McCrory a national platform in which to showcase just how much he's pandering to the bigoted elements of the Republican base by signing the so-called "bathroom bill" into law.

"What was the fear that led to the introduction of this law?" Kelly began by asking.

McCrory didn't answer directly, instead "correcting" the introduction to the interview by saying that the city of Charlotte's ordinance was a mandate on private businesses, which of course has no bearing on the bill passed by the North Carolina legislature and signed by him.

She continued to press him, demanding to know "what the evidence [was] that led you to believe this was a problem."

"It was a respect, an expectation of privacy that individuals -- especially our youths -- have that when they go into a locker room or shower or restroom, they expect only people of their gender to be there," he replied.

Kelly narrowed the conversation down to women's restrooms, saying that "I’ve been in women’s bathrooms my whole life, and we don’t have the urinal situation -- we’ve got the stalls. We get to go in and we do our business, and we don’t see each other. So why are you concerned about girls exposing themselves or seeing somebody else exposed in a woman’s bathroom?"

McCrory replied that "I can't believe we're talking about this -- this isn't an issue we started. The left started it, not the right. In fact, the Obama administration is now putting requires on federal money given to states that they also have to have this gender identification requirement for schools."

Kelly was annoyed by this non-answer, saying, "Can we get back to my question, please?"

He answered that he "empathized" with people who have "unique gender identification issues," and that schools should make "special arrangements for those people."

She replied that there's a "misconception" about the people he condescendingly described as "those people," that they are more likely to be rapists and child molesters. "They're not -- that's not true," she said.

"Typically male molesters are heterosexual, and if they want to sneak into a bathroom they’ll do it -- but in 90 percent of the cases, molestation happens with someone you know. So what is the fear with the transgender situation in the bathrooms?"

Watch the entire conversation via Fox News below.