Donald Trump's bankruptcy dodge: This is how lawyers and regulators helped him fudge solvency and avoid collapse

Twenty-five years ago, the government saved Donald Trump from his own profligate spending. It's an important lesson 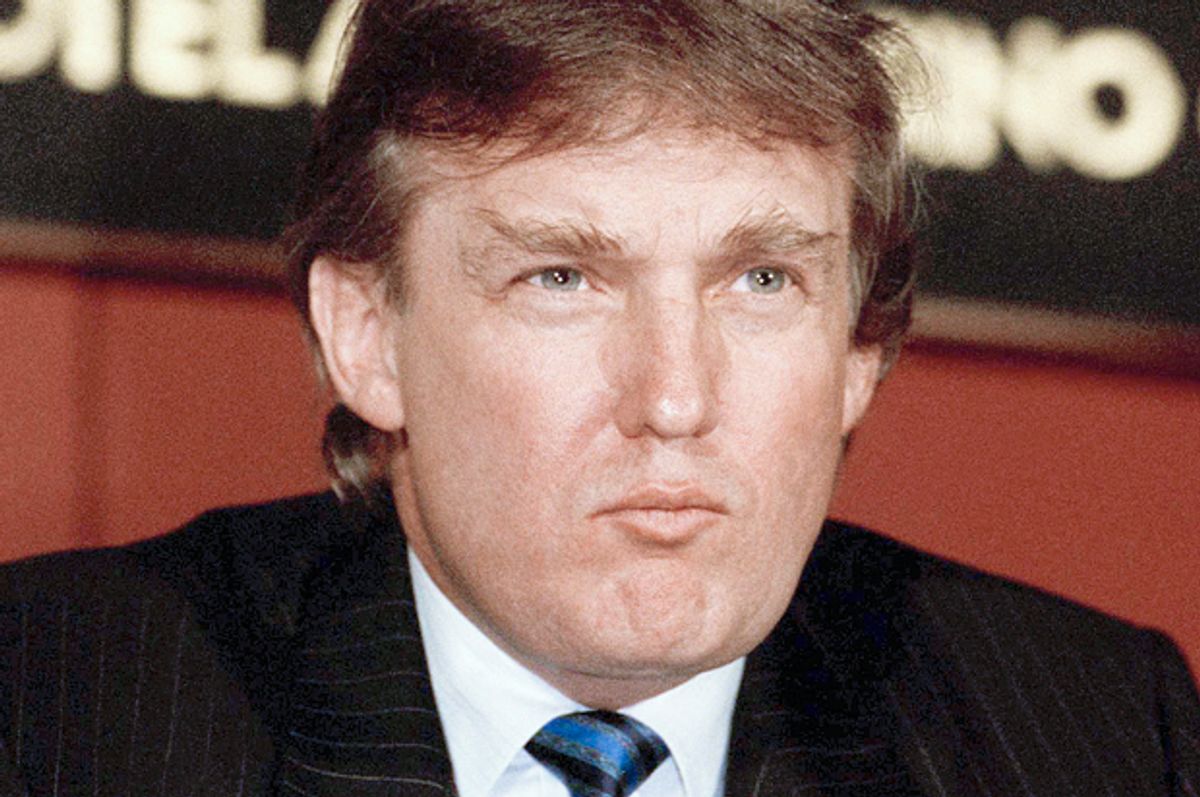 Americans wouldn’t be imagining today what a Trump presidency might be like were it not for a crucial moment more than 25 years ago when government saved Donald Trump from his own profligate spending. In fact, it was one carefully calculated response by one of his attorneys that saved Trump from financial collapse—just two years after Trump had proposed himself as a vice-presidential running mate for George H. W. Bush.

That moment, when New Jersey’s Casino Control Commission decided that Trump was too big to fail, was rich with lessons not just about Trump, but about how government can favor some people over others—and about how lots of journalists, then and now, don’t understand Trump.

From 1985 until 1990 Trump was awash in greenbacks. Over those four and a half years profits at his enterprises flowed into his pockets at the rate of $10,000 an hour in cash, around the clock.

At the time, Trump told me and everybody else that he was worth $3 billion. It was a dubious claim for a simple reason. If he was that rich, why was he unable to pay his bills as they came due?

In February 1990 Trump quit paying many of his personal bills. Reporting then for the Philadelphia Inquirer, I got his personal financial statement, which showed that he expected his income to fall to $748,000 in 1992 and to $296,000 the year after. That’s a lot of money to most people, but not to a “billionaire” with a personal 727 jet to maintain.

In April casino regulators made public a document showing Trump was down to his last $1.6 million.

Payments on more than a billion dollars of bonds on his three Atlantic City casinos came due every 90 days, but as the next payments loomed Trump lacked the money to make them.

About 100 vendors at the newly opened Trump Taj Mahal casino had not been paid. Many contractors took legal action to protect their interests. And the Trump Shuttle, equipped with what Trump said were gold sinks, was down to $1 million cash, not enough to pay employees and keep the fleet of Boeing 727s fueled, or to pay for constant repairs, since almost all the planes were more than 20 years old.

As April ended, I broke the story that Trump’s own personal financial statement showed he was worth far less than he claimed.

All this and more forced the New Jersey Division of Gaming Enforcement (DGE) to do something it had failed to do for years—examine Trump’s finances, to see if he met a critical legal requirement to own a casino, namely that he was financially stable.

The basic standard was simple: the ability to pay bills as they came due. If you had to roll over old debt into new, that was fine with casino regulators, so long as you did not miss payments. The law put the onus on Trump to establish his financial stability by “clear and convincing evidence.”

As the DGE moved in, Trump’s bankers had an accounting firm go over his finances. I summarized their report showing he had a negative net worth of $295 million this way: You may well be worth more than Donald Trump. That story ran above the masthead of the Inquirer’s front page with the headline “Bankers Say Trump May Be Worth Less than Zero.”

The morning that story ran was the critical moment for Trump. Near Trenton, the Casino Control Commission listened to testimony about whether Trump was financially stable. If it ruled he was not, his casino license would be rescinded.

The case that Trump should keep his licenses was made not so much by Trump’s own lawyers as by state employees at the DGE, who asked questions shaped to gloss over the growing gap between the revenue Trump was taking in and the bills he had coming due. It was a curious proceeding, as the DGE was supposed to investigate casino owners, workers, and the games themselves to ensure integrity and financial stability, not defend the owners.

A report by the Kenneth Leventhal accounting firm showed that Trump’s financial situation was deteriorating rapidly. Instead of ending the year with $24 million in cash, the accountants’ revised estimate showed he would run dry before the year’s end.

DGE’s own 111-page report noted that of the $3.2 billion Trump owed (not owned, but owed) he had personally guaranteed $833.5 million. Absent an agreement by all creditors, Trump faced an uncontrolled domino-effect chain of bankruptcies in which if one creditor moved against one Trump property the others would follow.

More than 1,000 lawyers working for Trump and his creditors (who already billed almost $11 million) had worked out a “fragile” deal to keep Trump going, hoping to minimize losses on the loans they had extended without checking his finances carefully.

The dozen reporters in the front row stood up, a few looking bewildered. “They’re rehearsing the answer to the next question,” I advised my colleagues. “When they come back, they’ll have the witness say Trump will be torn apart by the bankers unless the commission votes immediate approval of his deal with them.”

Minutes later, Thomas Cerabino, a Trump lawyer at the center of the private bankruptcy negotiations, took the stand. The next question came not from Trump’s lawyers, but from DGE’s Thomas Auriemma.

What would happen, Auriemma asked, if the commission delayed approving the deal?

With that warning from one of his lawyers, Trump avoided the B word, but it was made clear to commissioners that an uncontrolled bankruptcy was one day away. Only two other reporters wrote stories explaining what Cerabino had said—how he managed to convey, without saying it directly, that Trump was on the verge of ruin. That’s because most reporters merely quote people accurately, often with little understanding of the issues.

Before the hearings resumed the next day, several reporters rushed up to me, one clutching my big front-page headline, asking when I would retract my story. They said that Ribis, Trump’s casino lawyer, had just told them my story was wrong. I marched over to Ribis, asked a series of short questions whose answers established that my story was correct, and got him to confirm to my peers that no retraction of even correction would be requested.

When the commissioners entered the room they faced a choice. They could approve the “fragile deal” with the banks or go with the evidence showing that Trump was financially unstable and rescind his license.

That’s when four of the five political appointees used their power to take Trump’s side. The commission told the bankers they were free to foreclose on Trump. However, while they would be in possession of three large seaside hotels, there would be no gambling because the banks lacked casino licenses.

The commission’s action was extraordinary because state law provided for such a circumstance, allowing the commission to seize financially unstable casinos and keep them going with the existing staff until a new buyer could be found. Instead, the state of New Jersey took sides, favoring Trump over the interests of his bankers and the people who had put their money in those banks.

Four months later, as Christmas 1990 approached, Trump was again running out of cash. “Donald will need $180 million more from the banks to make it,” a source intimately familiar with the details of Trump’s finances told me back then.

It was the beginning of Trump having to relinquish his stakes in a host of enterprises—and by 1991 the Trump Taj Mahal was in Chapter 11 bankruptcy, the first of what would become four business bankruptcies. He later sold stock in his casinos, where investors not only lost their shirts, but during the fourth bankruptcy case creditors successfully demanded that Trump get lost. These days Trump licenses his name for much of his revenue.

Today Trump shrugs off the four bankruptcies, saying it’s a standard business tactic to restructure debt. But back in 1990 he was as afraid of that word as he is today of taking another tough question from Hugh Hewitt or Megyn Kelly. And but for government saving Trump by taking his side against his bankers, his business would have been tied up in years of litigation and we almost certainly would not be imagining the prospect of Donald Trump living at 1600 Pennsylvania Avenue. Because Trump would have been sunk beneath a sea of red ink.

This story first appeared on The Washington Spectator