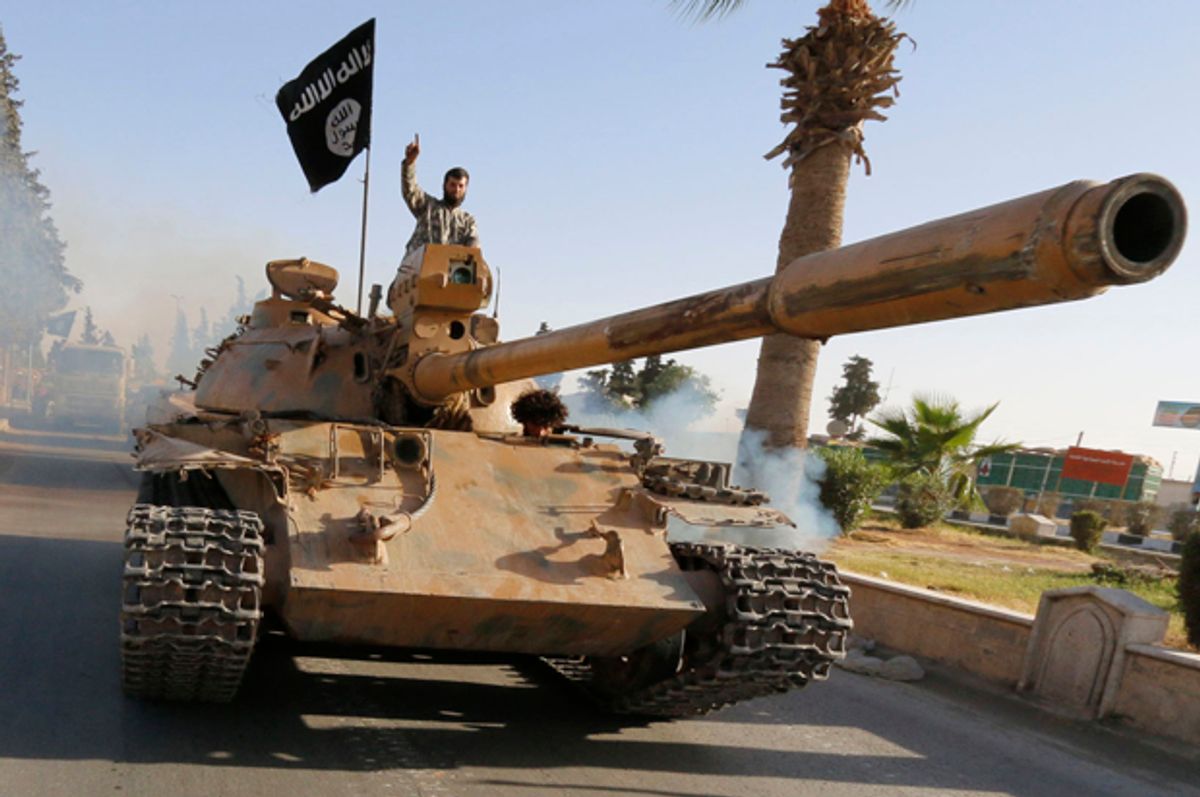 Thirteen years after the U.S. invasion of Iraq — which the U.N. explicitly said was illegal — supporters of the disastrous war continue to peddle the myth that secular Iraqi dictator Saddam Hussein bears responsibility for the rise of extremist groups like ISIS, not the disastrous war they sold to the public with lies.

When this claim is made in the media, however, it is rarely disclosed that the people making it were themselves staunch cheerleaders for the Iraq War. An exemplary case of this took place in April.

For more than a decade, scholar Amatzia Baram has argued that Saddam, a leader of the secular nationalist Ba'athist movement, was an Islamist who imposed sharia (Islamic law) on Iraqi society. In 2006, the neoconservative magazine the Weekly Standard cited Baram's claims to paint Saddam as an Islamist.

For more than three decades, Baram has also worked with the U.S. and Israeli governments — although this is rarely revealed in his articles or his author bios.

On April 8, Baram published an article in the prominent magazine Foreign Affairs titled "Saddam's ISIS: Tracing the Roots of the Caliphate." In the piece, he continued advancing this argument, insisting that Saddam "was an 'Islamist'" who "jumped on the Islamic bandwagon" in order "to gain popularity" in a "highly cynical political maneuver."

Baram claimed Saddam "imposed his version of Islamism" on Iraq, one of the most secular countries in the Arab world, implementing "de-facto Islamization policies" and extreme sharia laws, even while publicly and internally criticizing Islamism.

Saddam's 1990s Faith Campaign pushed Baathist leaders "to outright nihilism, which left them emotionally vulnerable to recruitment, first by al-Qaeda and later by ISIS," Baram wrote, claiming the Iraqi dictator, not the U.S. war, paved the path for the rise of violent extremism.

What is not revealed in the article or in his bio on the Foreign Affairs website is that Amatzia Baram, a professor emeritus at Israel's University of Haifa, has a long history working for the U.S. and Israeli governments.

Working for the government

In fact, when the Iran-Iraq War began in 1980, Baram was working for the Israeli military, serving "on loan" as an analyst for Military Intelligence's Iraqi desk. He has also taught at Israel's National Defense College, which was created by the chief of staff of the Israeli military in order to train the Israel Defense Forces.

Since then, Baram has worked at a slew of other elite institutions, serving multiple stints as a fellow at the United States Institute of Peace and the Woodrow Wilson International Center for Scholars, both of which are funded by the U.S. government.

Baram has also worked with the Washington Center for Near East Policy, a neocon-linked think tank that has been described as "part of the core" of the pro-Israel lobby by prominent scholars Stephen Walt, a professor at Harvard University's Kennedy School of Government, and John Mearsheimer, a professor at the University of Chicago.

Moreover, during the U.S. war in Iraq, Baram worked with the U.S. military, writing studies and lecturing for it.

A 2003 U.S. Institute of Peace newsletter shows Baram, a senior fellow for the government institution at the time, giving a July briefing on Iraq in Capitol Hill. While the U.S. was waging an illegal war in Iraq, Baram was giving advice on "address[ing] religious dynamics and how they might play out in a new governing structure and in light of U.S. plans and current leadership."

In the lead-up to the March invasion, Baram, who was close to the neoconservative establishment, pushed hard for the Iraq War.

In a February 2003 Brookings Institution press briefing titled "Showdown with Iraq," Baram, like many supporters of the invasion, insisted the impending U.S. war would be short.

"How long will you have to stay there? I would say most of your soldiers I think should go home and will be able to go home fairly quickly," he said. "You will still need there many soldiers, but not 100,000. No way. Then you gradually give them more and more self-rule and it will be eventually their own rule. You will like to go as soon as you can."

Baram also joked that the U.S. military should make Iraqis "more scared of you then [they are] of Saddam Hussein."

He applauded U.S. efforts, saying "America already, American psychological warfare already is working on" weakening Saddam's control, "telling the Iraqi army general, and any officers at all, he who is found guilty of pushing non-conventional button will be facing trial, and if found guilty will pay the price."

In an October 2003 op-ed in the New York Times titled "Victory in Iraq, One Tribe at a Time," Baram applauded the war effort. He proposed that the U.S.-led coalition should give "special treatment to tribal leaders" and declared that coalition forces in Iraq are "eminently capable of winning over many tribes."

"What works for Saddam Hussein can also be made to work against him," Baram wrote, echoing the logic of his comments in the Brookings press briefing.

More recently, in Foreign Policy magazine in 2009, Baram declared that Israel was a winner of the U.S. war in Iraq.

"Luckily for Israel, the Iraq war has proven to have taught Colonel Qaddafi a lesson through intimidation," Baram wrote, referring to the former Libyan dictator who would be brutally killed (sodomized with a bayonet) in the 2011 NATO war in Libya — a war that effectively destroyed the oil-rich North African nation's government and plunged it into violent chaos. In the years since, thousands of Libyans have been killed, hundreds of thousands of civilians have been displaced and extremist groups like ISIS have seized large swaths of territory.

"Thanks to the use of force against Qaddafi’s Iraqi counterpart, Israelis will never have to find out" if the Libyan strongman would attack, Baram wrote in 2009. "They will also not have to wonder what would have happened to an emboldened Saddam were the United States and several of its allies not to have invaded."

"Instead, the fall of Saddam’s regime closed a chapter on Iraqi support for one of the Israeli people’s most threatening foes," he concluded. "Saddam’s removal didn’t erase all the threats to Israel’s security. But the fact that nuclear weapons are no longer possible in Saddam’s Iraq or Qaddafi’s Libya is a lifesaver for Israel."

Baram's April 2016 Foreign Affairs article was a response to a January article by scholars Samuel Helfont and Michael Brill, who used archival research to debunk the myth that Saddam helped create ISIS.

Helfont and Brill published a response to the response in Foreign Affairs on April 20, titled "Saddam Did Not Create ISIS: Getting the Terrorist Group's Origin Story Right."

The scholars note that Baram has not visited the Hoover Institution archives, which they describe as "one of the most important Baathist archives, which contains the overwhelming majority of available internal regime records."

"It is [Baram's] lack of direct study of this archival material that has led him to make problematic claims about Saddam, the Baathist regime, and the emergence of ISIS," the scholars argue.

They indicate that Baram's own claims are contradictory. In his April article, he concedes that Saddam opposed Salafism, but makes the opposite assertion in his book.

Contrary to Baram's argument, Helfont and Brill point out that Saddam pledged to fight Islamists if they seized power. "The Baathists spent considerable time and effort suppressing these people and their ideas," they write.

Helfont and Brill also stress that their findings are similar to those of other scholars who have spent years researching in the archives. This collective research "has produced a body of literature on the regime’s religious policies that consistently highlights that Saddam did not become an Islamist," they conclude.

"The absence of the Baathist regime’s repression and the collapse of the Iraqi state as a result of the 2003 invasion — not Saddam’s non-existent promotion of Islamism prior to 2003 — is what bred ISIS," Helfont and Brill argue.

"Instead of finding a way to connect Saddam to Iraqi jihadists, academics and policymakers alike would be better served by contemplating the role of the U.S.-led invasion and botched occupation of 2003 in unleashing the chaos that continues to claim lives today," they add.

The real reason: the Iraq war

Even former British Prime Minister Tony Blair, who backed the U.S. war effort in Iraq, has admitted that the illegal invasion of Iraq led to the rise of ISIS, and has apologized for his leadership role.

Well over 1 million Iraqis died in the war, according to a study by the Nobel Prize-winning medical organization International Physicians for the Prevention of Nuclear War — “and this is only a conservative estimate,” the report notes.

Al-Qaeda was not in Iraq when the U.S. invaded, despite disinformation to the contrary spread by supporters of the war. It was the U.S. invasion, occupation and "de-Ba'athification" policies that destroyed the government and destabilized the region.

Moreover, U.S. support for sectarian Shia death squads that killed and tortured Iraqis only fueled the fire of sectarian violence.

Amatzia Baram concluded his April 2016 article acknowledging that there are other reasons for the rise of ISIS, not just Saddam. He blamed other U.S. government enemies, namely Iran and Syrian dictator Bashar al-Assad (another secular Ba'athist dictator whom he accuses of having supported al-Qaeda, without linking to any evidence), along with "Sunni and Shiite segments of Iraqi society."

In the more than 2,000-word piece, Baram mentioned the U.S. war in Iraq — which he staunchly supported — just twice, and only then in passing.

With topsy-turvy logic, he maintained Saddam was culpable for making Sunni Iraqis "susceptible to al-Qaeda after the 2003 U.S. invasion and, eventually, ISIS."

Instead of blaming the U.S. war in Iraq, Baram said "mistakes made by the U.S. occupation and the way the United States eventually withdrew from Iraq were key causes too." Like neoconservatives, Baram insists the "mistakes" and the withdrawal were the problem, not the illegal U.S. war effort in the first place.

The scholars were responding to Kyle Orton, a fellow at the hawkish, neoconservative British think tank the Henry Jackson Society (named after the fervently anti-Communist former U.S. senator), who published an op-ed in the New York Times in December titled “How Saddam Hussein Gave Us ISIS.”

Today, many of these figures like Kyle Orton, who have pushed the Saddam-created-ISIS myth, are now claiming the same about Syria, insisting secular dictator Bashar al-Assad created ISIS and Syrian al-Qaeda affiliate al-Nusra — which happens to be supported by U.S. allies Saudi Arabia, Qatar and Turkey.

Iraq War supporters and neoconservatives are essentially trying to absolve themselves of responsibility for the horrific consequences of the 2003 war by continuing to propagate the debunked myth that Saddam was in some way connected to extremist Islamist movements like al-Qaeda, taking Saddam's Faith Campaign out of context.

In the process, they are distorting and politicizing the history.

There has been absolutely no accountability for the scholars, journalists and pundits who peddled propaganda and lies in order to push for the illegal U.S.-led invasion of a country that had nothing to do with the Sept. 11, 2001 attacks.

Today, with millions of innocent people killed, wounded and displaced, with the Middle East roiled by chaos, many of these same figures continue to actively rewrite history.