Feed Ramsay Bolton to the dogs already: "Game of Thrones"’ biggest villain should be more interesting than this 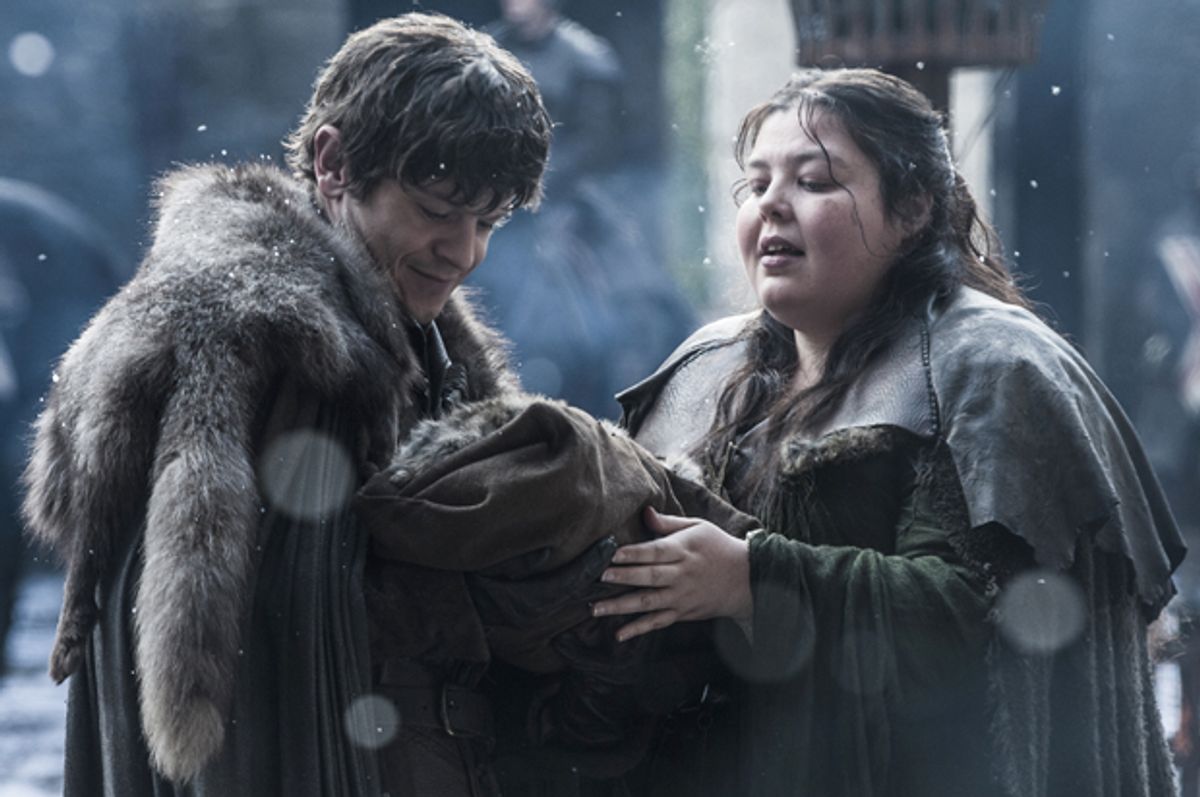 Iwan Rheon and Elizabeth Webster in "Game of Thrones" (HBO)
--

“Game Of Thrones” aired one of its most upsetting scenes ever last night, and weirdly, it was about a rather marginal and already well-established plot point. In a protracted scene in Winterfell, Ramsay Bolton (Iwan Rheon) set his killer dogs on his stepmother Walda (Elizabeth Webster) and her newborn baby son—his own half-brother.

As I discussed this morning, one of the reasons the scene is so upsetting is because it’s seemingly endless, and for no reason except to prolong the gruesomeness and the horror. We know Ramsay Bolton is a bad guy already. We have seen him flay people alive, murder children, and brutalize women. We watched him torture Theon (Alfie Allen) over the course of seasons; we watched him rape Sansa Stark (Sophie Turner) just last season. We furthermore know that he has hounds that he’s trained to hunt down and devour human flesh; we’ve seen them do that, too.

To add aesthetic insult to narrative injury: It’s not particularly shot well. It is not particularly beautifully written. To go back to an analogy I used this morning, the rising histrionic score and the not-so-tense reveal feel much more like a campy horror film than the tense, riveting plot twists “Game Of Thrones” has frequently delivered. Even the way that Webster has been directed to stand and hold her baby feels unimaginative—a vignette, of sorts, of endangered motherhood, that indicates little interesting about her, her baby, or the scene itself.

What I am trying to say is, this is not a scene with any new information or particular aesthetic merit. And yet here it is, taking up space in primetime on HBO on one of the most-watched shows in the world.

Last week, in advance of the sixth season, I argued that “Game Of Thrones” could not help but be skewing somewhat conservative at this point in its lifespan, because it is now a product that has to deliver a certain type of audience. There is no better evidence of that than this scene, one that is gratuitously horrible to a new and fascinating degree. I have my issues with the violence in “Game Of Thrones” in general, but there is something especially grotesque about violence that doesn’t even tell you anything, or doesn’t try to do something. It is just another installment of the show’s privileged theater of horror, a front-row seat to the horrors of the body that are engineered to excite audiences who suffer from those horrors the least.

And when it comes to Ramsay Bolton, this problem is particularly heightened. In the first several seasons of “Game Of Thrones,” villainy was a label that became complicated and layered, just like nearly every other label. The Lannisters went from being the show’s Slytherins to becoming the three lead characters; Littlefinger (Aidan Gillen), Stannis (Stephen Dillane), Margaery (Natalie Dormer), and Varys (Conleth Hill) have moved between villainy and heroism in ever-fascinating shades of grey. Even Joffrey (Jack Gleeson) was a child—a child raised to abuse power, while his mother looked on approvingly.

Ramsay Bolton is just a monster. There is a backstory to him—he was the bastard son desperate for his father’s attention. But he got what he wanted, sort of; he was formally recognized by his father in season four, and made the Bolton heir. That story, as sympathetic as it might be, has not been depicted as having anything to do with his rather showy sadism. If there is redemption in store for this character, it has been very poorly established.

And even as a foe, he is too impervious to be fascinating. Ramsay is ruthless, loveless, and completely unstoppable; it is telling that Theon and Sansa could only escape by running away from him, and then then, they just barely survived, thanks to the sudden arrival of Brienne (Gwendoline Christie). After last night’s episode, the one person whose respect and validation he seemed to crave—his father—is now dead, by his own hand. The rest of Winterfell, he keeps in an iron fist of fear. Watching him week to week is to live under the shadow of the despairing reach of pure darkness. I suppose if the show is attempting to create a metaphor for depression, with the endless boring despair of Winterfell in these past few seasons, it’s doing a good job.

As a result, Ramsay’s presence in the show—despite Rheon’s best efforts—is a blight on the rest of it. There is nothing narratively engaging about him. But he lingers, like a black cloud over the rest of the show. And I think that is because as a cunning sadist, Ramsay has become the show’s primary vector of violence. “Game Of Thrones” has bought into creating a theater of despair, with rape, torture, and murder; but a lot of people have died since the show began. I don’t know what delights the show has yet to reveal with Ramsay—maybe we are just all barreling towards a conclusion where Sansa slowly plucks his eyeballs out, or something—but his continued presence, to my mind, is purely about “Game Of Thrones” maintaining its loyalty to its most bloody-minded instincts.