But as they say in Pyke, what's dead may never die—so we'll have to keep watching to know for sure 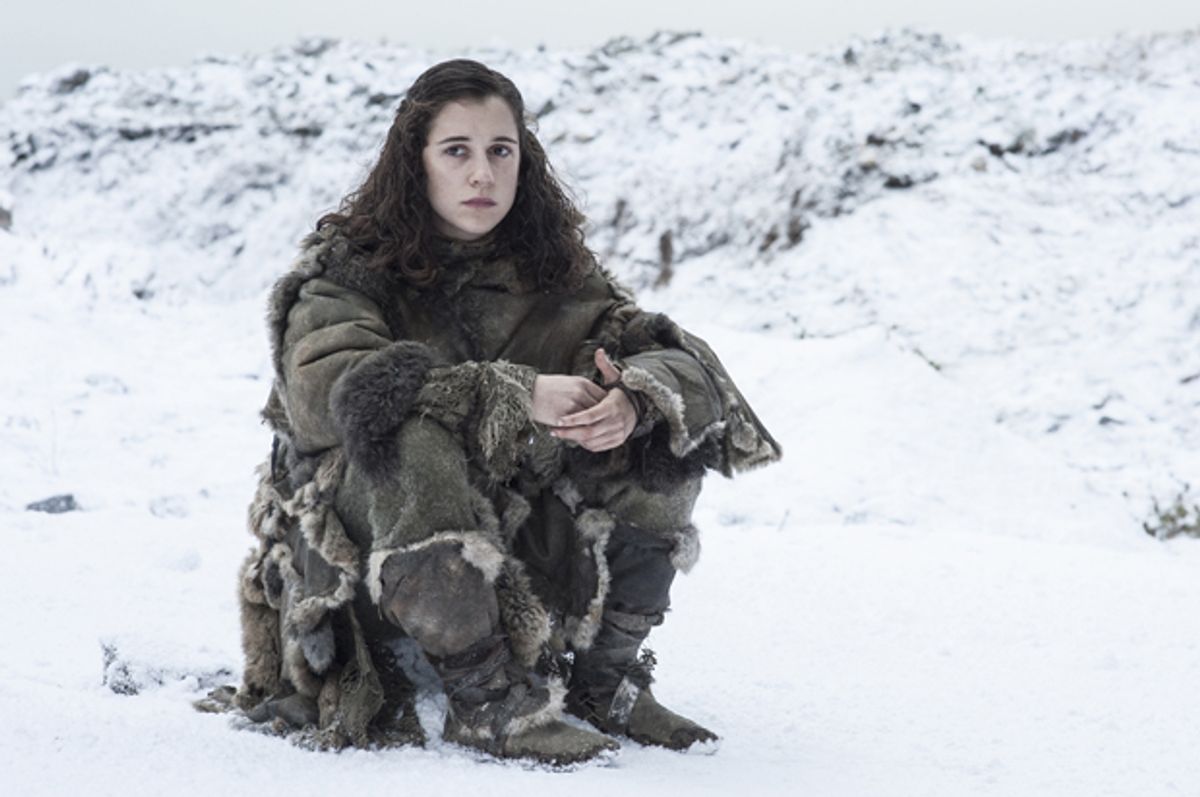 The following is a recap of the “Game of Thrones” episode "Home," and it contains spoilers galore.

It’s a little counterintuitive that an episode with one of the biggest plot reveals of the television season is also one that feels most anticlimactic. As welcome as the reveal of the final moments of “Home” is, the pacing of the episode lopes and drags, squandering much of the suspense, horror, and wonderment it could have created.

This is most evident in the final climactic scene, where—seriously, do not read further if you don’t want to be spoiled—Melisandre (Carice Van Houten) raises Jon Snow (Kit Harington) from the dead, fulfilling perhaps some ancient prophecies of Azor Ahai and also some far more contemporary ones hatched by fans and critics over the last year.

It was, if you have ever seen a film or television show, rather obvious. It’s true that “Game Of Thrones” isn’t one for wimping out on slaying major characters, of course—Snow’s father Ned Stark (Sean Bean) being no exception. But there was so much other stuff happening around Jon Snow that actually killing him off seemed nigh impossible. It would have hobbled the show’s dramatic thrust and ended a character arc that had up till then been central to five years of the show’s storytelling. Also, come on: Harington’s name never even left the opening credit sequence. We are not rookies; we know how show business works.

To add inevitable to inevitability, Jon Snow was even whisked from death in the exact way that most people thought he would be. To quote my own piece, written directly after last year’s season finale:

Melisandre, a priestess of the Lord of Light, is right there—imbued with powers that we already know can raise people from the dead, as Thoros of Myr did with Beric Dondarrion a whole bunch of times in season two. Of course, she declined to resurrect Stannis in this episode, so maybe she’s not feeling up to it. But that could happen, especially if Melisandre becomes (more) convinced that it’s Jon, not Stannis, who is the one who was promised, Azor Ahai himself.

So, it happened. Just as we thought it would. And though I am glad that Harington and his emo, brooding character will be once again a part of “Game Of Thrones,” there is so little else to feel about the development. Plot events do not have to be surprising in order for me to feel moved—but in some ways, it’s hard not to feel like the show kind of spoiled itself with the Jon Snow storyline. His awakening on that cold slab was the kind of grand reveal that a campy horror film would offer up; you can just imagine Jon Snow as Frankenstein’s monster, with the score swelling with mounting strings as the audience waits with breathless anticipation for the beast’s eyes to open. The story is broadly signaling its emotional beats to the audience, with a kind of unrestrained glee, and though that can be quite fun, it’s also one-dimensional. Our expectations for the scene—for the whole minutes we’re staring at Jon Snow’s body—are not intriguingly being subverted, or anything.

In this case, anyway, I can let it slide. Jon Snow’s death is a weird plot element from the fifth book that the showrunners, David Benioff and D.B. Weiss, had to adapt one way or another. That the death and resurrection took all of three episodes is quite short, for the future binge-watcher (and quite symbolic, for the future Christian theologian).

But this self-spoiling, massively telegraphed plot movement is all over “Home,” in a way that I found very frustrating to watch. Over in Pyke (that place with the Viking-like sailors, Theon’s sister and dad, and the islands), for example, a climactic scene happens to take place on a rope bridge in the middle of what is apparently a hurricane. It’s almost as if someone is going to pitch right over the flimsy rails of the bridge and to their doom in the roiling ocean below. Oh, and then someone does that. At Winterfell, Ramsay Bolton (Iwan Rheon) kills his father and then threatens, for long, icy minutes, to kill his stepmother and half-brother, too. After a few minutes of preparing to kill them, he… kills them. This is not storytelling that is shattering the imagination.

It’s interesting. On one hand, as I wrote last week, George R.R. Martin shows no ability to be able to tie off loose threads. This is in large part because, as my former colleague Rowan Kaiser breaks down here, “Game Of Thrones” is a story built on constant deconstruction and subversion of the expected pattern for fantasy stories. But at the same time—as any suffering postmodernist will tell you—deconstruction doesn’t map well to narrative; fragmentation and revision spin away from a coherent whole, not towards one. In order to be a story with an ending, “Game Of Thrones” has to map onto some kind of narrative arc, and that will automatically mean it’s denying some basic promise of its mere existence.

But Martin had his own special genius, of course. Because in constantly subverting our expectations for the “Game Of Thrones” narrative, he may not have laid a road to the ending, but he never failed to surprise us. One of the reasons the world of Westeros has the fever-pitch of fan enthusiasm it does is that the story undercuts every expectation you have for a story, from killing off the hero in the first season to making the villains the show’s heroes, by season two. Now that Benioff and Weiss are giving us an ending, “Game Of Thrones” might lose some of its ability to surprise its audience. After all, we’ve had years to foment over these myriad details; there are whole Internet databases devoted to keeping all the lore straight. We can anticipate several endings. Benioff and Weiss can only choose one.

Which is a long way of saying that the trouble of ending, and the trouble of excitement, are two issues “Game Of Thrones” will have to contend with well beyond last night’s “Home.” Short of making “Game Of Thrones” a soap opera (neverending) or having it end through some insane deus ex machina, like an atom bomb over Kings Landing (full departure from the strictures of plot), the story will be caught between its ability to subvert and its need to just finish up, already.

But it’s not all dramatically inert scene-setting. In an episode featuring resurrection, a brief wilding invasion, and a room full of dragons, the scene where Davos Seaworth (Liam Cunningham) personally entreats Melisandre to try her magic on Jon, telling her how much he believes in her abilities, ends up being the most suspenseful—precisely because it’s difficult to predict how it’s going to play out. Melisandre sentenced to death Davos’ friend and near-adoptive daughter, Shireen (Kerry Ingram), but Davos doesn’t know that yet. Davos seems to think it is very important to try to save Jon Snow, for reasons that might have something to do with ongoing devotion to Stannis’ mission and might just be a sense of duty to the realm. And meanwhile, as we learned last week, terrible and terrifying Melisandre is having her own dark night of the soul, a consideration of her own faith and how lost she feels.

Though the dramatic weight of Jon’s resurrection lies on Melisandre’s closing ritual in “Home,” what actually ends up bringing him back from the dead is Davos convincing her that she can and should do it. She confesses her shaken belief, and he bolsters her, with a surprisingly respectful admiration for her abilities. He even stumbles over the word “magic,” when he’s hovering by her, because it’s that distasteful to him to acknowledge her Red God mumbo-jumbo. But it’s enough for her to re-center herself and go to Jon Snow’s corpse. That decision is where the drama is, not the unseen magic that follows. It’s those little character beats of revelation and wonder that will end up selling whatever ending Benioff and Weiss have in store for the rest of us. As sweeping as a dramatic score and an invading horde of wildings is, it’s individual choices that ultimately make or break this world.