"Burn the witch": With Radiohead's eerie return, they've lost none of their strange magic 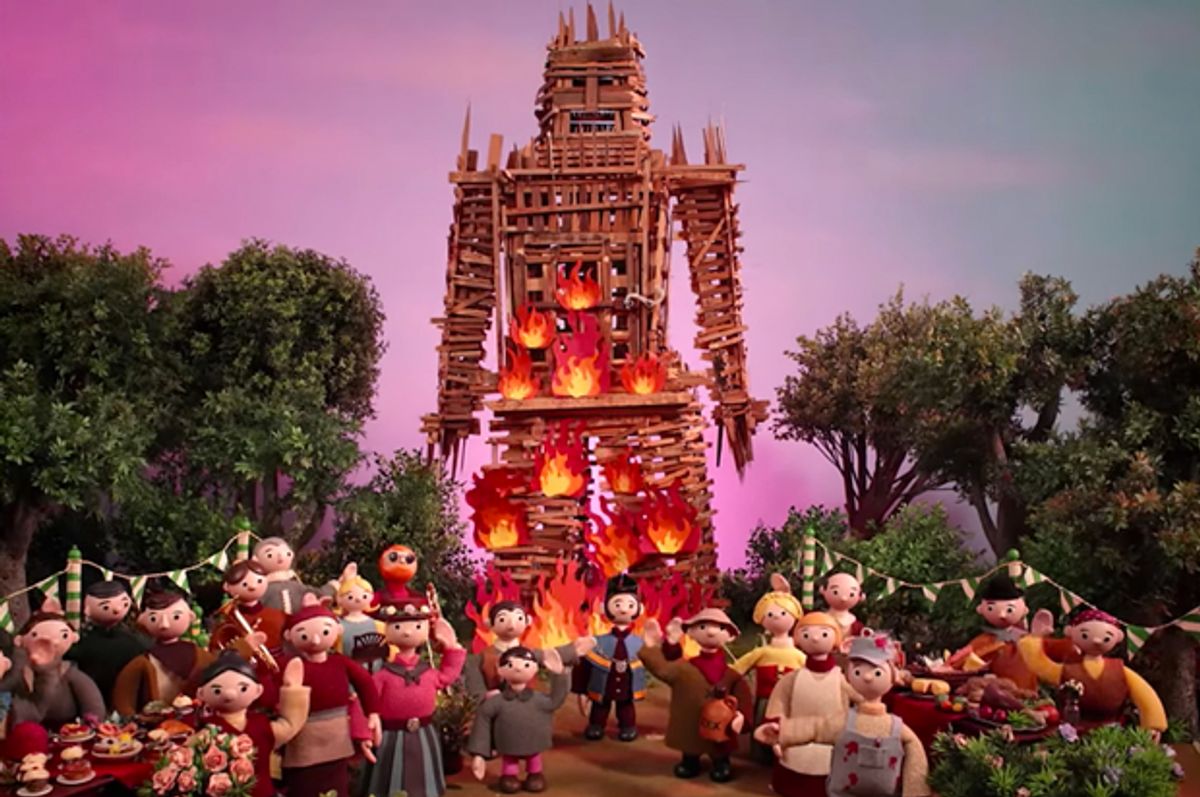 Between its use of strange instruments (ondes Martenot, anyone?), songs about paranoid androids and karma police, or its selling an album on a sliding scale, Radiohead has been one of the most enigmatic bands ever to become popular.

Over the last few days, the English band has faded its website and Twitter feed, and sent out flyers with the sentence “Sing the song of sixpence that goes ‘burn the witch’.” Today the first new song from the band’s first album in five years has dropped, and it’s both a great new number and as casually disturbing as what we’ve come to expect from Radiohead.

The video for the new song – take a guess what it’s called – begins like a Wallace and Gromit vision of English small-town pastoral. Between the traditional village architecture, and the scenes of women arranging flowers and a man painting a traditional English postbox, it’s a peaceful scene of a community in harmony. But as a visitor tours the village, unpleasant images show up, like the woman tied to a tree while people in robes and animal masks wave swords at her. Ah, right, this is Radiohead, isn’t it? Then the visitor spots a noose. “Do not react,” Thom Yorke sings a few seconds later. “Shoot the messenger/ This is a low-flying panic attack.”

In British terms, it goes in just a few minutes from recalling Trumpton – a charming village from a ‘60s BBC children’s television show – to “The Wicker Man,” the classic 1973 horror movie set among neo-pagans on a Scottish island. (It was remade by Neil LaBute in 2006.) The video was directed by Chris Hopewell, who made the video for “There There” and Franz Ferdinand’s “The Dark of the Matinee.”

The originally wicker man was a wooden statue originally used by Druids, for ritual burning, and possibly for human sacrifice. It’s sometimes burned in effigy today by neo-pagans.

Musically, the song is built around repeated staccato strings and Yorke’s falsetto: It sounds a lot like the Radiohead we know, with a fair bit of the atmosphere Jonny Greenwood summoned in his "There Will Be Blood" score.

Given all the expectation around Radiohead after its Internet disappearance, the stakes are high for the new album, which could arrive at any moment. Some people, including me, want the group to offer a blistering take on the role on digital technology in our lives. The band doesn’t seem to be going in that direction, but the video suggests that Yorke and company have some heavy themes on their minds nonetheless.

“The lyrics appear to be skirting around the surveillance society,” The Guardian surmises “but equally they might be meditating on the difficulties of open discussion in an age where thought is scrutinised and policed by the public itself on social media, where any idle thought runs the risk of seeing one condemned as #problematic.”

The song also appears to be about the secrets a small-town can harbor, the dangers of homogeneity, and the violence that lurks under the surface of apparent normalcy. It may be wrong to expect a band that trades in mystery and indirection to make any of its themes and ideas explicit, but a unified album around a set of concerns – not unlike “OK Computer” – would be quite welcome. Musically, the song suggests that the band might make even more substantial use of classical instrumentation and technique. Few current groups seem better poised.

So far, the response to the new song and video seem to be mixed-to-positive. But this is an ambitious and ominous few minutes of sound and vision. Whatever Radiohead delivers, signs are good that this group has lost none of its strange magic.