Mitch McConnell's Senate majority is just this pathetic: How he's giving Paul Ryan a run for his money

Paul Ryan's House is a disaster, but McConnell's SCOTUS obstruction is its own brand of self-defeating stupidity 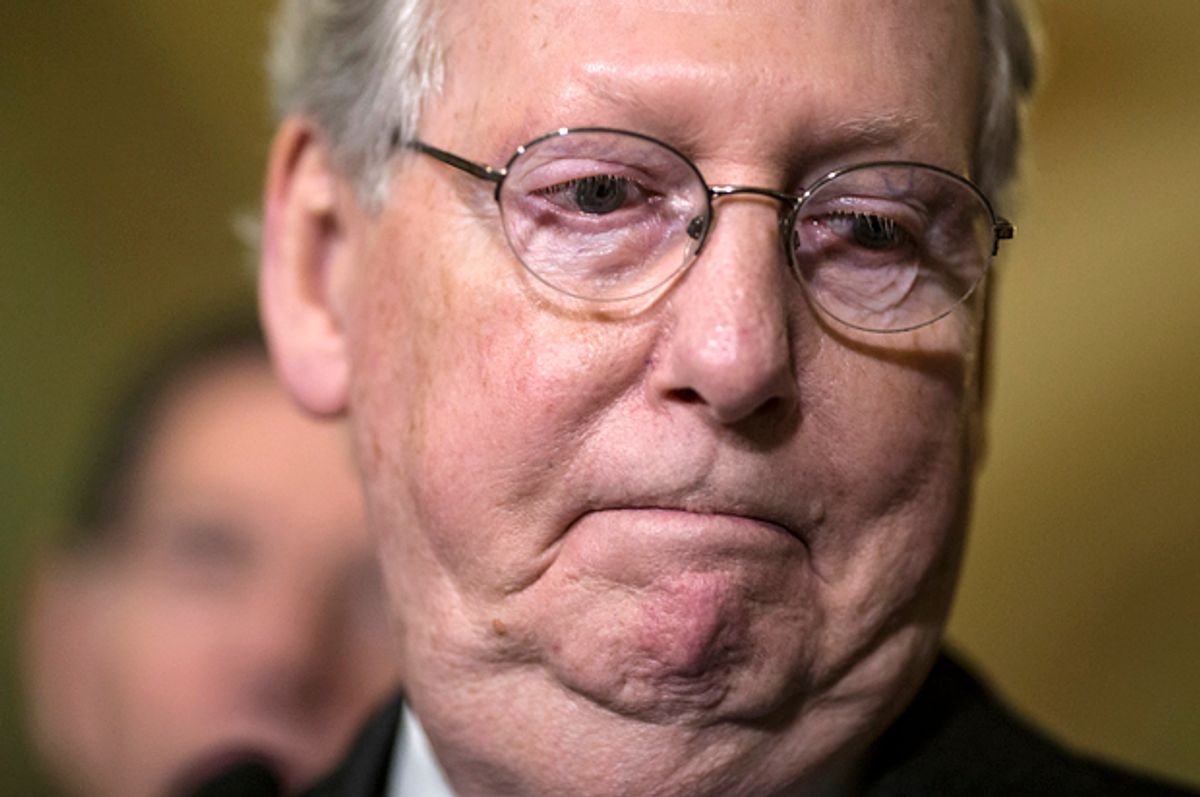 Mitch McConnell should send Paul Ryan a thank-you gift, maybe some funds for his re-election campaign or a muffin basket. Because we have been paying so much attention to all the ways Ryan is utterly terrible at performing his duties as Speaker of the House, we may have missed how awful McConnell is at being the Senate’s Majority Leader.

Granted, after the vast obstructionism McConnell and his caucus engaged in when they were the Senate minority for the first six years of the Obama administration, no one should have had high expectations when the GOP took control of the chamber after the 2014 election. It’s always easier to be a minority party shouting “NO” to every proposal, up to and including when to take bathroom breaks. But put the minority in the majority and make it responsible for putting together coalitions that might require compromise in order to keep the machinery of government functioning at a bare minimum, and you get…well, you get the House of Representatives.

The Senate isn’t quite as bad as that viper’s nest of yahoos, but it is bad enough. Why? For starters, because senators are putting in three-day workweeks and getting more paid vacation days in one year than many Americans might get in 10. Currently, the upper chamber of Congress is on pace to be in session for all of 124 days in 2016, its lightest schedule since 1956, when Jack Kennedy was a first-term senator. Considering the glacial pace at which legislation tends to move through the Senate in even the best of times, you have to wonder why McConnell is bothering to convene it at all this year.

There is, of course, a school of thought that says the less time that politicians are working, the fewer chances they have to pass some seriously terrible bills. For example, if neither chamber passes a budget resolution this year and has to fund the next fiscal year using continuing resolutions that set spending at this year’s levels, well then, at least programs that people depend on to live, like subsidized school lunches or Meals on Wheels for elderly invalids, won’t get cut any more. Which, in this era of insanely divided government and the more conservative party being run by sociopaths and Ayn Rand aficionados, is perhaps the best we can hope for.

On the other hand, one wonders, in an election year where populist anger and disgust with the workings of Washington have propelled a human-shaped mass of fake-suntanned fascism to the verge of the Republican nomination, why Mitch McConnell thinks the thing to do right now is to make the Senate look like an even lazier, more dissolute bunch of do-nothing dilettantes than the vast majority of the American public already assumes it to be.

A year ago, if you had said that the GOP base’s hostility towards President Obama and the Democratic Party is so implacable that there is no point in McConnell pretending he has any interest in passing any kind of legislation, I would have agreed with you. But this year, the Republicans have enough members vulnerable to losing their re-election campaigns that there is a better-than-good chance Democrats can win enough seats to once again gain the majority. And there are signs that some of the obstructionism that the GOP is engaging in could hurt those weak senators in the fall.

Exhibit A is the saga of Merrick Garland, Obama’s nominee to replace the deceased Antonin Scalia on the Supreme Court. The Republicans have handled this situation badly from the start, having announced that they would not confirm a replacement this year from almost the second the paramedics stopped searching for Scalia’s pulse. The chairman of the Senate Judiciary Committee, Chuck Grassley (R-IA), has kept up the party line by refusing to schedule hearings for Garland, though he did very kindly meet with the judge to senators-plain our checks-and-balances system of government.

Grassley is one of those senators who could be in for a tough re-election fight this fall. It wasn’t likely to be tough at first. But since Scalia died nearly three months ago, Grassley’s approval rating in Iowa has fallen by 15 points, to 42 percent. Other senators such as Ron Johnson in Wisconsin and Kelly Ayotte in New Hampshire are also struggling, and recent polling suggests that the Garland confirmation issue is driving at least some of their problems.

Granted, there are some other factors at play here. For starters, structural realities of the electorate probably would have put the Senate in play this year no matter who the Republicans nominate for president. There just happen to be more vulnerable purple-state senators hitting the end of six-year terms, the class that swept in on the Tea Party wave in 2010 now having to defend itself.

Second, Donald Trump is so unpopular that his presence at the top of the Republican ticket might result in a slaughter in the down-ballot races. But this is what puts McConnell in such a tricky spot. If his people are perceived as being too close to Trump, they might get wiped out in the fall. On the other hand, if they seem to be abandoning a candidate that the party’s base has voted for in overwhelming numbers, they might get wiped out in the fall. It is, as Ned Flanders might say, a dilly of a pickle.

Facing that, McConnell has chosen the route of continued obstruction combined with a light workload that allows candidates to spend more time in their home states campaigning for re-election to jobs that they are, by all observable evidence, already not doing. It’s probably the worst of all possible strategies if he has any hope of keeping his Senate majority. But then, he was much more effective a leader when his party was in the minority and could more legitimately argue that its job was to do absolutely nothing.