Trump meets Ed Klein: America's least-credible journalist has an inside line to the 2016 GOP frontrunner

Donald Trump had lunch with sleaze-hound Ed Klein, which points to an ugly Trump-Clinton general election 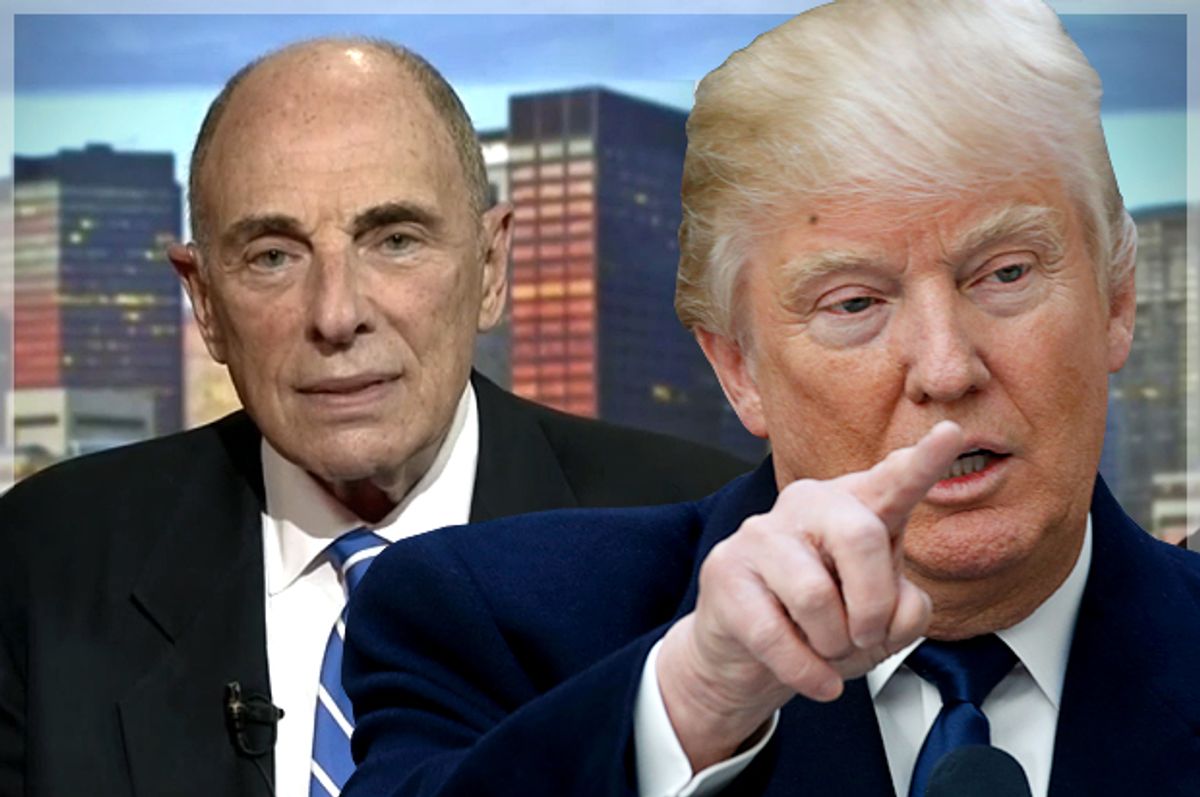 Donald Trump had lunch with Ed Klein yesterday in Indiana. As the Washington Post reports, Klein told reporters that he’s “following Trump around for a couple of days to gather material for a new book,” but the fact that Trump is providing access to someone like Klein is a pretty good indicator of just how fantastically ugly and dirty a Trump general election campaign will be.

Who is Ed Klein? Well, the Post describes him as being “perhaps best known for his series of bombshell books spreading rumors and innuendo, much of it discredited, about the Clintons.” That description is actually a bit too charitable – Ed Klein is a liar. He’s a fabulist who tailors his bullshit quite deliberately to appeal to the vast audience of gullible conservatives who will believe literally anything he makes up about the Clintons. His stories get basic facts wrong, like the times certain events happened and the physical locations of key figures in his “reporting.” He’ll make a salacious allegation in the lede of the story and then flatly contradict it a few paragraphs later. He claims to have sources deep inside the Clinton universe who feed him verbatim quotes of Hillary speaking like an oversharing Bond villain.

I’ll offer a quick example just highlight how Klein’s “reporting” is actually just his own imagined nonsense, which he can alter on the fly for dramatic effect. In his latest book, Klein writes at length about Hillary working with Steven Spielberg and other Hollywood people to make her more likeable, and how as part of that process she set up a video camera in her den to record herself speaking. After a round of bad press reviews of her speaking style early in the 2016 campaign, Klein writes, she told “a friend” that “I got so angry I knocked the fucking camera off its tripod. That was the end of my Stanislavski period.” Retelling that same story during a speech last November, Klein switched a few things up and added a few more details to make it sound still more scandalous. “She took the video camera in her den, and the tripod, and she smashed them on the floor, and stamped on them,” Klein said. “And when her friends came to visit and looked at this smashed video camera, they said ‘what in the world is that all about?” And she said, ‘that is the end of my method-acting period.”

That’s the thing about Klein – he hasn’t felt any need to be truthful, or consistent, or even plausible because he knows there’s a voracious appetite among conservatives for Clinton “dirt.” Even still, his exaggerations and lies had become so obvious that even some prominent conservatives were calling him out and warning people away from his “reporting.” That level of mistrust among elite conservative pundits is significant because for someone like Klein, the conservative media is a critical vehicle for injecting his dodgy Clinton allegations into more mainstream political discussions. Trump, however, offers Klein a more direct route to the front pages.

You’ve probably noticed, but Trump isn’t the most discerning fellow when it comes to promoting attacks on his rivals, and he doesn’t shy away from allegations that other political figures would consider too controversial. He was the face of the Obama birther movement, he’s been pushing questions about Ted Cruz’s citizenship – he’ll repeat pretty much anything you tell him. And that’s what makes his coziness with Klein such a problem. To Trump, a guy like Ed Klein is a perfectly credible source. He wrote books, after all. Books! And he was the editor of the New York Times Magazine several decades ago. As far as Trump’s concerned, this guy is basically Walter Cronkite, if Walter Cronkite had spent his time writing about how Hillary Clinton is totally a lesbian.