Bernie Sanders won big in Indiana so why did The New York Times relegate him to below its coverage of John Kasich? 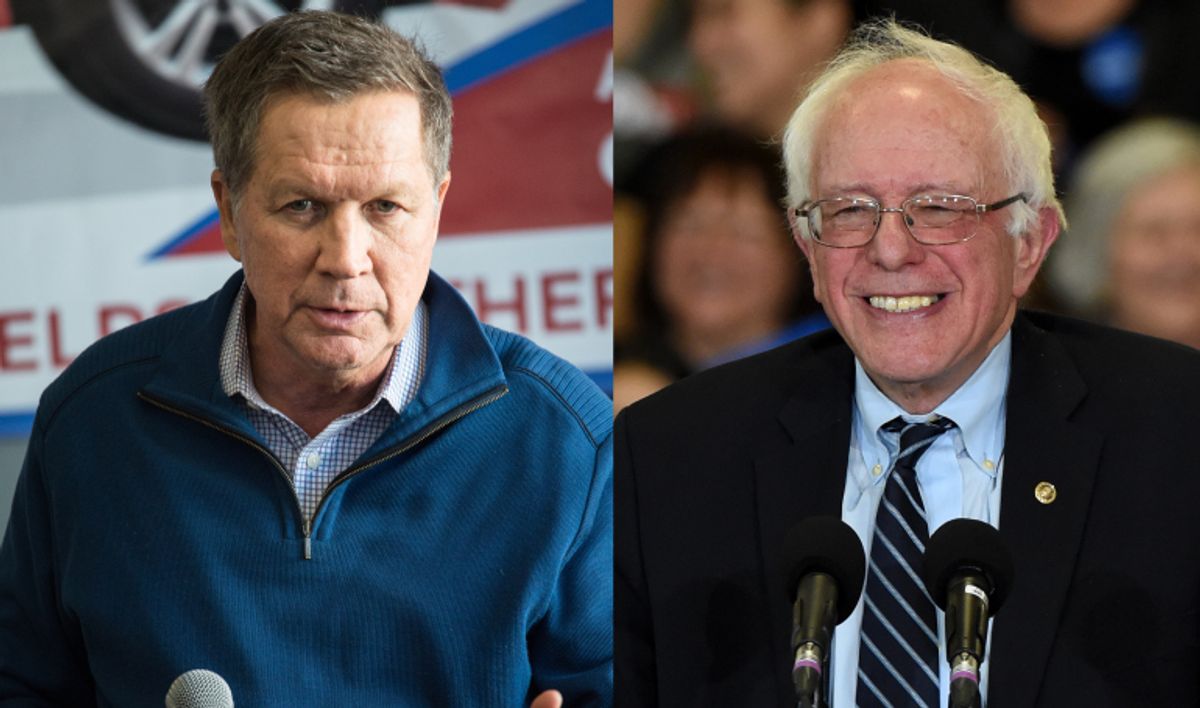 A little after noon on the East Coast and the New York Times' Wednesday front page is already outdated. No, not the near full cover image of newly "presumptive" Republican presidential nominee Donald Trump and his wife Meliana parading in front of adoring fans at Trump Tower after defeating his last remaining competitors in Indiana. "Trump Nears Nomination As Cruz Drops Out," the giant headlines read, and not to worry, Cruz remains out of the race after being rejected by Indiana conservatives on Tuesday.

Unfortunately for the Times, Kasich would go on to suspend his longshot bid to wrangle the nomination away from Trump at a contested convention only hours later:

As for its actual coverage of Sanders victory in Indiana, that didn't come until after two paragraphs devoted to the Republican race -- an undoubtedly historic race, to be sure -- and was sandwiched between two more mentions of Trump:

After months of sneering dismissals and expensive but impotent attacks from Republicans fearful of his candidacy, Mr. Trump is now positioned to clinch the required number of delegates for the nomination by the last day of voting on June 7. Facing only a feeble challenge from Gov. John Kasich of Ohio, Mr. Trump is all but certain to roll into the Republican convention in July with the party establishment’s official but uneasy embrace.

In the Democratic contest, Senator Bernie Sanders rebounded from a string of defeats to prevail in Indiana over Hillary Clinton, who largely abandoned the state after polls showed her faring poorly with the predominantly white electorate. But the outcome was not expected to significantly change Mrs. Clinton’s sizable lead in delegates needed to win the Democratic nomination.

Mr. Trump’s victory was an extraordinary moment in American political history: He is now on course to be the first standard-bearer of a party since Dwight D. Eisenhower, a five-star general and the commander of Allied Forces in Europe during World War II, who had not served in elected office.

Sanders was not brought back up until 14 grafs later, after yet more on Trump's historic takeover of the Republican nominating contest, alongside a vote of the 74-year-old candidate looking curmudgeonly -- hardly the coverage befitting the winner of a stunning upset.

While the Times did accurately report that "the Indiana results were an embarrassing reminder of [Clinton's] vulnerabilities," referring to Sanders winning Independents in the state by 73 percentage points and Clinton losing blue-collar white voters by 30 points, it misleadingly regurgitated Clinton campaign's spin about their chances in the state as fact:

While Mr. Sanders devoted three days to campaigning in Indiana and spent more than $1 million on television advertisements, Mrs. Clinton did not run any ads and spent only a day campaigning in the state, visiting the Indianapolis area.

Clinton advisers said they saw no point in spending a couple of million dollars on television advertising and campaign travel when Mrs. Clinton was likely to lose the state anyway: Its Democratic primary electorate includes a healthy share of independents and newly registered voters, demographics that have repeatedly favored Mr. Sanders.

That last part, about Clinton being likely to lose the state is simply not true. When Sanders won Indiana on Tuesday, he beat the polling averages by a wide margin. Clinton led state polls by about 7 percentage points before the Tuesday primary.

Of course, this is not the first time Sanders defied polling to pull off a stunning upset. In Michigan, the Vermont senator trailed Clinton by 21 points in polls before winning the state primary.

And while Sanders remains locked out of clinching the Democratic presidential contest before the convention despite a slate of favorable states voting in coming weeks, his campaign is quick to point out that Clinton can't either without a major boost from superdelegates.