Ted Cruz vs. the GOP identity crisis: He's everything the base said it wanted — but it really wanted Donald Trump

Cruz confirmed through his campaign just how horrible he is. Yet it's hard not to feel just a little bad for him 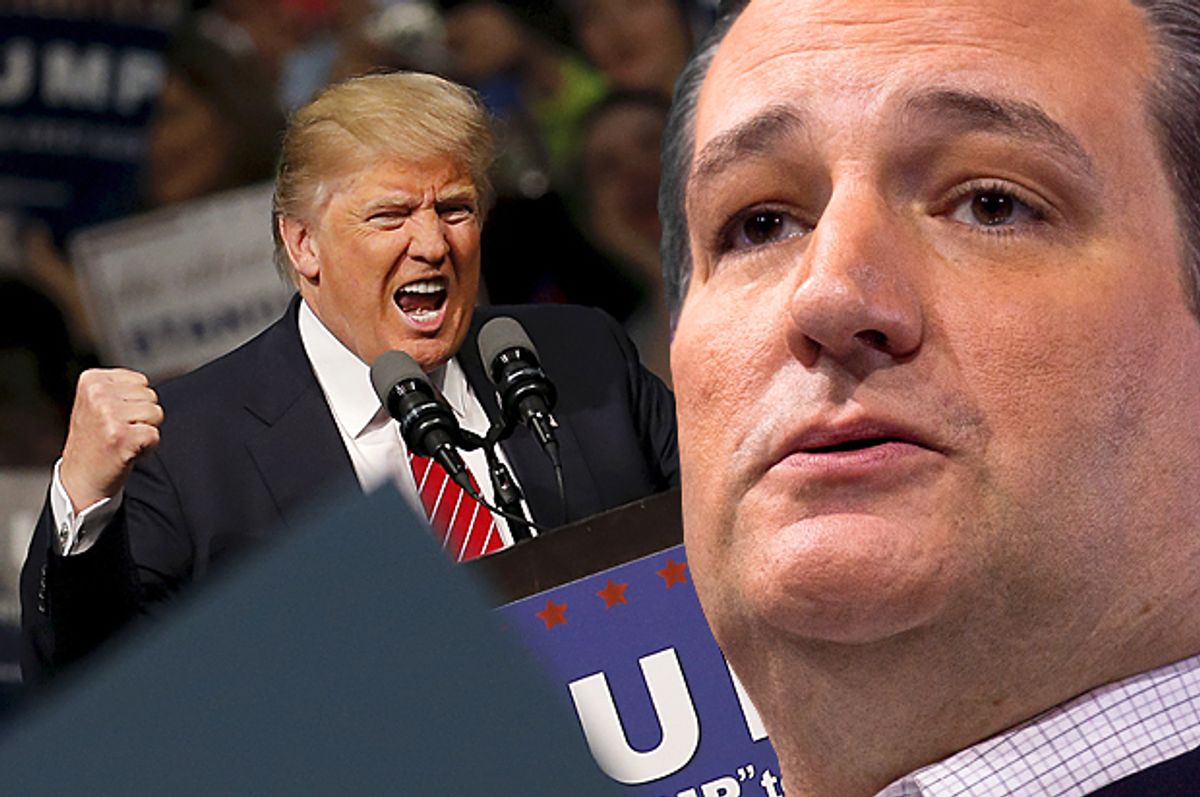 If anyone thought that Donald Trump might go easy down the stretch, yesterday's circus sideshow before the vote should disabuse them. On the day he was projected to win a yuuuuuge victory in Indiana, which was widely assumed to spell the end of the #NeverTrump movement and be Ted Cruz's last stand, Trump decided to take a gratuitous swipe at Cruz by parroting a National Enquirer article that accused Cruz's father of being in on the Kennedy assassination:

TRUMP: And, you know, his father was with Lee Harvey Oswald prior to Oswald’s being, you know, shot. I mean the whole thing is ridiculous. What is this, right prior to his being shot, and nobody even brings it up. I mean they don’t even talk about that. That was reported, and nobody talks about it. But I think it’s horrible. I think it’s absolutely horrible that a man can go and do that, what he’s saying there.

BRIAN KILMEADE (CO-HOST): Right. There was a picture out there that reportedly shows Rafael Cruz standing with Lee Harvey Oswald —

TRUMP: I mean what was he doing with Lee Harvey Oswald shortly before the death, before the shooting? It’s horrible.

Cruz was clearly angry about that and with some justification. If anyone else had said something like this it would have been considered a heinous smear unworthy of a presidential candidate. With Trump it was just another Tuesday.

Cruz came out swinging and staged an election day press conference like nothing we've ever seen before. “Pathological liar," “narcissist," and “serial philanderer” are just a few of the words he used to describe his rival. He reminded people that Trump has said he regards “his battle with venereal disease as his own personal Vietnam” and that he was "nuts." And that was just for starters.

"Lyin' Ted" spoke the truth. Trump is all those things and more. But he's also Teflon Don, and nobody cares.

Cruz showed that he had finally figured out how to grab the microphone from Trump and use him as a foil to get media attention. He managed to do it with the Fiorina announcement, his weird confrontation with a Trump yahoo on Monday, and now this. The problem is that he figured it out too late. And even if he had done this earlier instead of being too clever by half and clutching Trump to his bosom, there's still the problem of his truly unpleasant personality, which puts people off so much they're willing to take a chance on putting the country into the hands of Donald Trump.

As if he were a big cat playing with mouse, Trump responded to Cruz's angry tirade with this:

"Ted Cruz is a desperate candidate trying to save his failing campaign. It is no surprise he has resorted to his usual tactics of over-the-top rhetoric that nobody believes. Over the last week I have watched Lyin' Ted become more and more unhinged as he is unable to react under the pressure and stress of losing."

Within 12 hours of Donald Trump accusing Cruz's father of being involved in the JFK assassination, he won a big victory in Indiana and Cruz dropped out of the race. Donald Trump is officially the presumptive nominee of the Republican Party.

You have to give Cruz credit where credit is due. He was almost as much of a long shot as Trump when this whole thing started and he turned out to be the runner-up in a field that had been touted as an embarrassment of political riches. Nobody expected him to do as well as he did, and for good reason. He is an extremist who's much too far right to win a national election and way too unpopular with the party establishment.  Nonetheless, he might have been able to pull it off if it weren't for the fact that Trump exposed a major tear in the GOP matrix. It turns out that at least half of those who call themselves evangelicals aren't quite as principled as they like to pretend. They succumbed to the siren's call of a decadent, thrice married billionaire who hates foreigners and women a lot more than he loves Jesus.

Cruz had planned to get the whole Christian Right on his team but was only able to corner the market on those who aren't hypocrites. Unfortunately for him, it turns out that there aren't as many ultra-conservative right wing ideologues in the Republican Party as we all thought.

But despite setbacks, he proved to be a smart tactician who used sophisticated modern methods to analyse the electorate and was nimble enough to switch gears when things weren't working. (Recall that his original plan was to sweep the hard right conservatives in the deep South, which had to give way when Trump was so strong there.) He fought hard all the way through yesterday, trying anything and everything to gather delegates by hook or by crook, planning for a contested convention by lining up 2nd ballot delegates all over the country.

As loathsome as I find his politics, I cannot help but feel sorry for him. Ted Cruz was everything the base of the GOP said it wanted. He is an evangelical Christian, a social and fiscal conservative, a demagogic warrior for the far right who went to Washington and did exactly what all these people say they wanted the Republicans to do when they voted for them in the 2010 and 2014 midterms. He obstructed the president at every turn, angrily defied the GOP leadership, and answered only to the Tea Party base. Yet it wasn't good enough.

The problem for Ted Cruz was made clear on the day before the Indiana primary by a protester he engaged on the sidewalk outside one of his events. People in the crowd were yelling, "career politicians have killed America" and "Trump'll take down ISIS, he'll take down the whole damn thing" and the man to whom Cruz was speaking directly looked right in his face and said, "you are the problem, politician, you are the problem."

The Trump phenomenon isn't a rejection of ideology, it's a rejection of politics. Trump and the people voting for him aren't interested in fancy ideas or academic theory, and they do not care about the principles that inform our system of government. They just want action, and a lot of them obviously think Donald Trump might just be a superhero who can make things happen by sheer will and the power of his out sized personality.

No one would ever mistake Ted Cruz for a superhero. He's just a True Believer, and that's no fun at all.