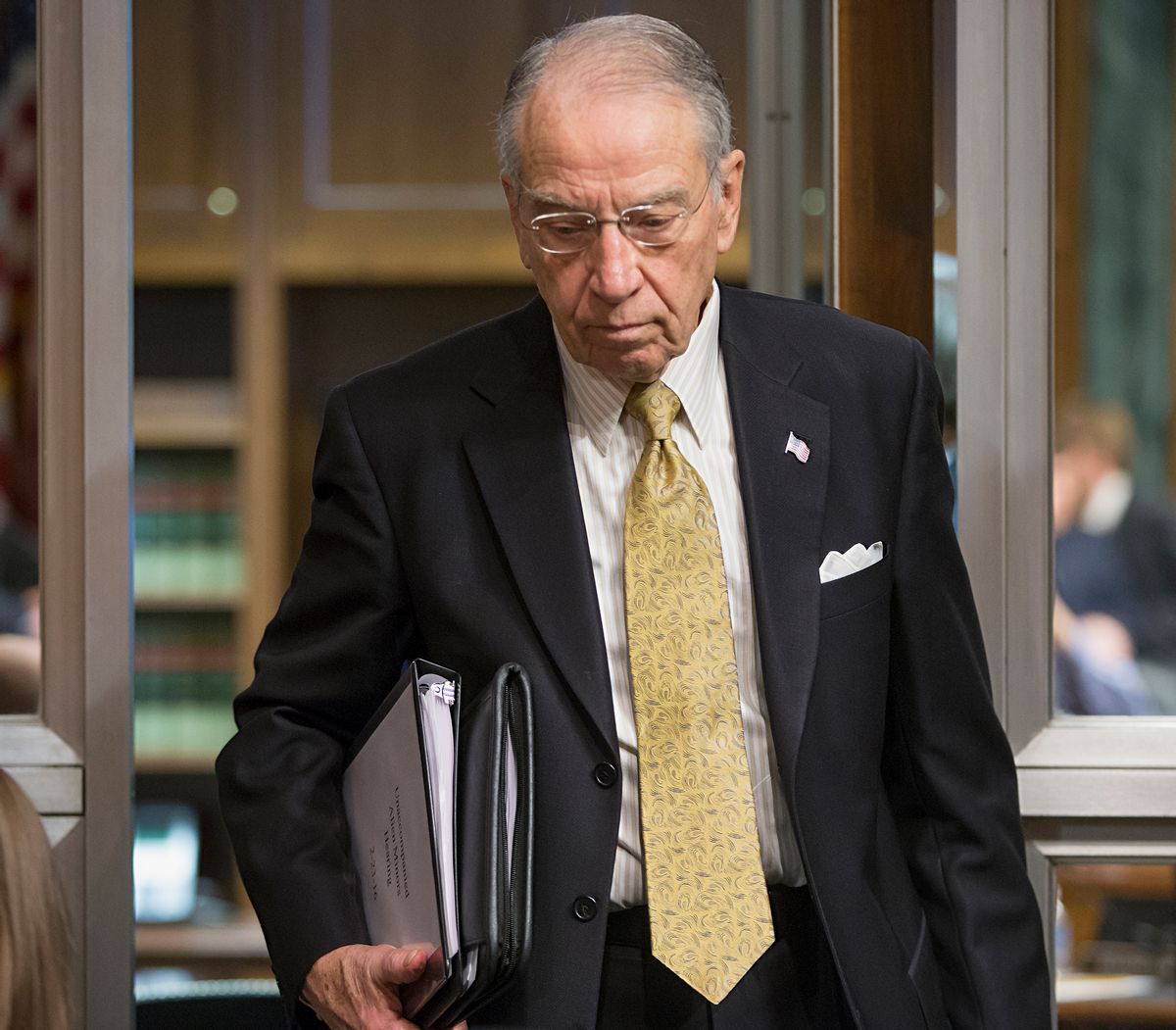 Senate Judiciary Committee Chairman Sen. Chuck Grassley, R-Iowa arrives for a committee hearing on Capitol Hill in Washington, Tuesday, Feb. 23, 2016. Senate Republicans, most vocally Majority Leader Mitch McConnell, are facing a high-stakes political showdown with President Barack Obama sparked by the recent death of Supreme Court Justice Antonin Scalia. Republicans controlling the Senate  which must confirm any Obama appointee before the individual is seated on the court  say that the decision is too important to be determined by a lame-duck president. (AP Photo/J. Scott Applewhite) (AP)
--

The words “presumptive nominee Donald Trump” present a political problem for Republicans as they try to reconcile the tension between party loyalty and Trump’s uniquely toxic identity. You can already see this tension playing out in Senate races – incumbent New Hampshire Republican Kelly Ayotte put out a statement announcing that she would “support” Trump as the nominee, but her campaign also insisted that her “support” did not constitute an “endorsement.” That doesn’t make any sense, and it’s an untenable position for a Republican officeholder to have.

But Ayotte’s problems are minor compared to the predicament Senate majority leader Mitch McConnell and Senate Judiciary Committee chairman Chuck Grassley have gotten themselves into. McConnell and Grassley are the two men behind the Senate GOP’s strategy of blanket obstructionism regarding President Obama’s nominees to replace Supreme Court Justice Antonin Scalia, who died in February. Beginning almost immediately after news of Scalia’s death broke, McConnell and Grassley have argued that we shouldn’t have a Supreme Court confirmation hearing in the middle of a presidential primary, and that the voters should have a say in who gets to nominate the next justice.

Well, Republican voters have had their say, and they chose Donald Trump. So the official position of the Republican leadership in the Senate is that they can’t confirm Merrick Garland or any other nominee because the former host of “Celebrity Apprentice” deserves to be given a crack at determining the future of the high court.

This was always going to be a problem, but the immediate need to keep another Obama appointee off the court overrode the political threat posed by a potential Trump nomination. Now that Trump has won the nomination, they’re stuck, and they have no good options going forward.

They can keep obstructing and making the case that the nomination should be decided after the new administration takes power, but they’ll be doing no favors to themselves or their colleagues up for reelection. Grassley’s approval rating in Iowa has taken a massive hit since the SCOTUS obstruction started, and vulnerable Republicans in blue and purple states across the country are going to be caught between Donald Trump, their party leadership, and the voters as they struggle to explain why there shouldn’t be a vote on Obama’s nominee. McConnell and his chief lieutenants are trying to game out ways for Republican Senate candidates to attack Trump on the trail, thus putting them in the politically untenable position of campaigning against the man their own party selected to make the next SCOTUS nominations. Grassley himself has acknowledged that letting Trump fill vacancies on the Supreme Court is “a gamble.”

But let’s say they stick with the obstruction tactic all the way through and Trump ends up losing badly to Hillary Clinton. She could opt to nominate a judge who is younger and more liberal than Merrick Garland. Republicans (who very well could be in the minority at that point) would obviously move to obstruct and filibuster, but Clinton could just turn the Republicans’ own argument against them – you said we had to wait for the people to have their say, and they overwhelmingly voted for a Democratic president, so get busy confirming a justice.

And it’s not like McConnell and Grassley can just reverse course at this point and allow the Garland nomination to go forward. They’ve already devoted so much time to wrapping themselves in “principle” and disingenuous arguments about the sanctity of the Supreme Court that they’d come off as massive hypocrites. They’d face a revolt from conservative activists and voters who will never forgive them for letting whatever chance exists of restoring the court’s conservative majority slip away. They’d also face a backlash from the sizable pro-Trump contingent of the party for robbing their candidate of the chance to make that nomination. And, on top of all that, it would be a signal to the entire electorate that the Republicans in Congress do not have any faith or trust in their presidential nominee when it comes to appointments and nominations.

So they’re stuck. Predicaments like these have become commonplace over the last eight years as Republicans have put up unyielding obstruction to Obama without pausing to consider whether they could actually stand to gain politically from it. It happened with the government shutdown, it happened again with the harebrained plan to defund DHS, and now it’s threatening to happen once again with the Supreme Court vacancy.