TV's election coverage is like an endless Ted Cruz GIF parade: Obsessed with micro-moments while the big Trump picture whizzes by 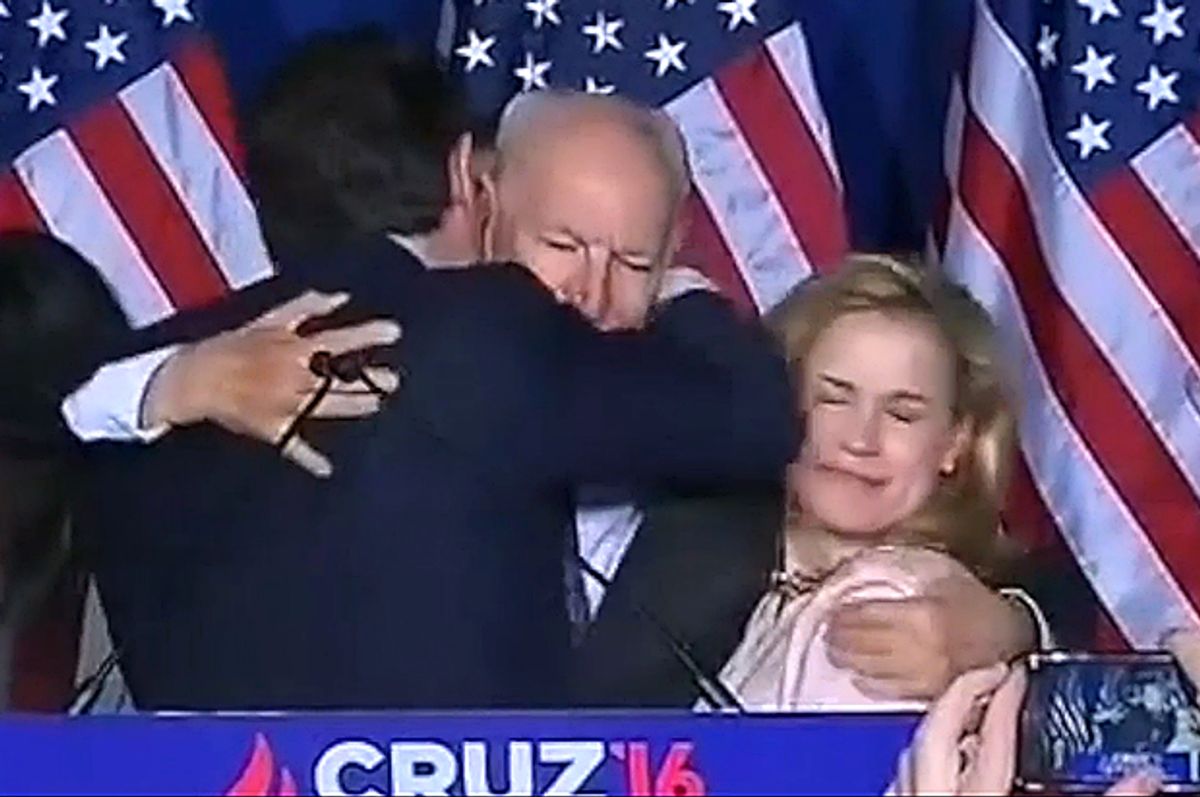 Of course, that was not the biggest news of the night, or the most surprising. But it may have been the most beautiful. Just one day after the earth swallowed Carly Fiorina up right after introducing him, just six days after Cruz feverishly announced former candidate Fiorina as his running mate, and just seconds after ending his desperate and flailing campaign for the GOP nomination, Cruz reminded Americans how deeply unsuited he is for highly scrutinized public office. It is not a sin to be an uncharismatic buffoon, but it is not electable, either, as Republicans in Indiana confirmed last night.

Across media last night, and especially on television news, the reaction to Donald Trump’s victory in Indiana—the state which, Cruz declared, would make or break his campaign—was one of surreality, despite the fact that this has been the most likely scenario for weeks now. It is the news media’s job to report on what the state of the nation is, especially in an election year. But this year, the well-groomed anchors and commentators on television news seem entirely bemused by the nation they are covering. “It’s stunning, and it’s historic,” Gloria Borger said on CNN. The way Slate’s Isaac Chotiner describes the words from her mouth, it’s as if she they were torn from her under duress.

… when people look back at Tuesday night’s results a generation from now, our larger cultural response—at least as seen through our television media—will seem incomprehensible. On TV Tuesday night, there was hardly a whimper. CNN, MSNBC, and Fox contented themselves with bright chatter about Ted Cruz’s hurt feelings, about Donald Trump’s political skill, about the feckless, pathetic Republican establishment. None of the commentators I saw mentioned the import of what was happening.

I agree with Chotiner, to a point. We have failed, either as journalists or Americans or citizens in the world, in letting Trump happen. But it is well past time where something as delicate as media commentary and the zeitgeist could fix it, either. The national political journalists who are witnessing a white nationalist demagogue sweep one of America’s major political parties are all shifting in their seats, wondering if they will regret stronger words when an increasingly likely President Trump sits in the Oval Office. What are they going to do, risk their invitations to next year’s White House Correspondents’ Dinner? Of course Wolf Blitzer seems struck by banal lightning; of course panels on MSNBC and Fox News debate the shades of meaning in the word “presumptive.” The emperor has no clothes, but the closer you get to the highest echelons of power and access in this country, the less you want to be the only voice pointing that out.

But this isn’t just about media’s elitist cowardice, or news-network ratings, or even a morally bankrupt love affair between capitalism, information, and sloppy red-white-and-blue graphics. It’s about who we are, now, as a nation. For all of Trump’s unsavory tactics, he is merely proving how terrible the system is by winning it, according to its own rules. He has bought this election with racist ideology, empty promises, and approximately one bajillion dollars; and past the anger of pointing fingers at the media, or working-class white voters, or “the South,” is the real problem: This is how the system works. This is who we are.

If it is the media’s job is to report on the nation we’re in—not, necessarily, the nation that any specific journalist wants—then to some degree, they have to be on board with what the electorate is voting for. This is not fraud, or conspiracy, or corruption; this is a by-the-book hijacking of the Republican party. The spokesmen for the Republican National Committee trotted out by the major networks for comment, wear frozen rictuses of terror—not because they feel threatened by Donald Trump, but because they are being held hostage by the will of an electorate they clearly completely underestimated.

In May of 2016, the mainstream news media is in the same boat. Of course it has been complicit in creating this mess, just as you or I or anyone else has been. But this isn’t the result of One Crucial Error or a Big Mistake that everyone in media and politics made at the exact same time about Donald Trump. This is the result of the infotainment-truthiness-politimania that has defined the American political process in the modern age. Donald Trump, like Kim Kardashian, has gamed the system very well, and though everyone hates it, there is only so much you can say or do without seriously critiquing the system itself. And the problem with that is that we are all in that system, and it’s not easy to critique that which educates your kids, doles out your paycheck, keeps the lights on, keeps the water (somewhat) running.

So anyway, Ted Cruz. Ted Cruz is the least of America’s problems—especially now—but the elbow to the face was so blessedly idiotic, so hapless for beleaguered, soup-flooded Heidi Cruz, that it still resonated even after he formally bid goodbye to the election. As a moment, it was immediately gif-able, shareable, and laughable, lifting straight from television news to the far less forgiving playground of the Internet. It was also just a much simpler kind of bad, and a much simpler variety of funny. We can laugh at Ted Cruz, failed candidate, because his narrative is only about his own failures. It is much harder to find perspective about Trump without starting to feel the ground shake beneath your feet.