Where the campaigns of Ted Cruz and Bernie Sanders meet: Examining the fatal flaw in their election strategies 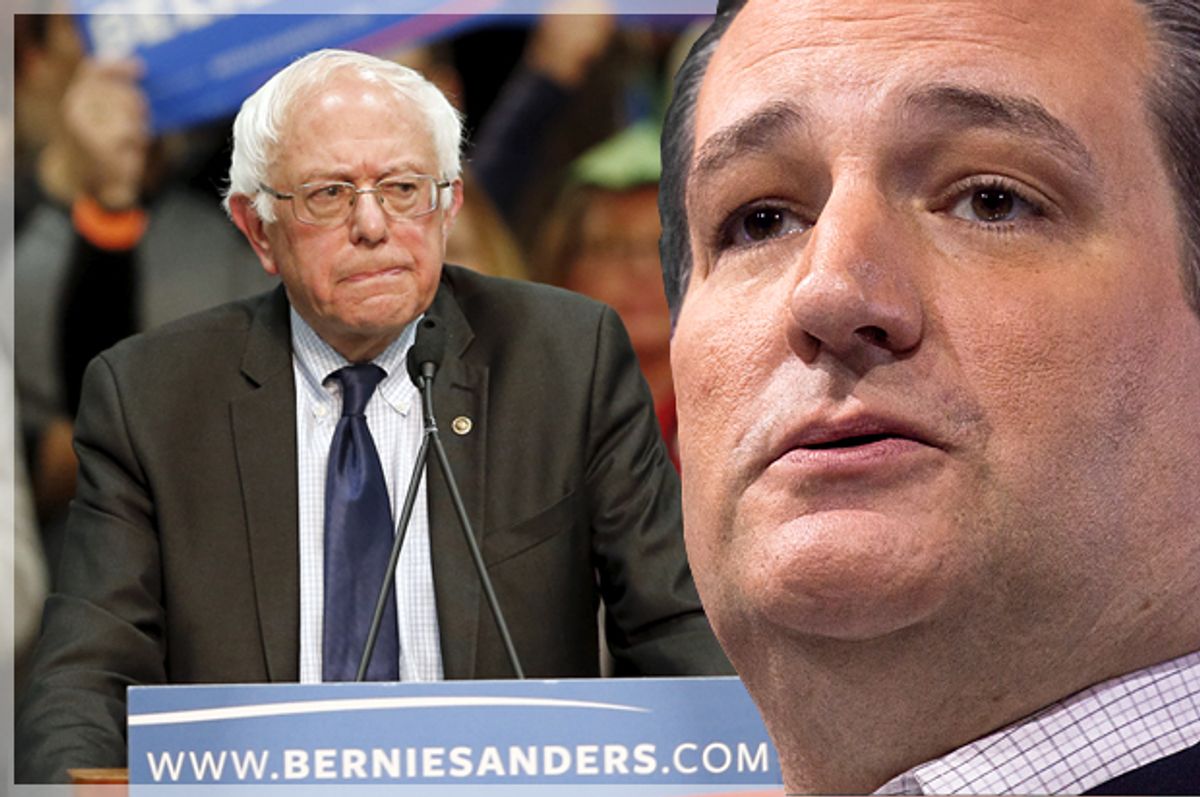 Bernie Sanders and Ted Cruz, in most aspects, are two men who couldn't be more different from each other: One is a hardline evangelical right winger and the other an irreligious democratic socialist. But with Cruz terminating his campaign Tuesday night, in the face of impossibly long odds of winning the primary race against Donald Trump, it is worth taking a look at the similarities of the Cruz campaign to the Sanders campaign, which is facing similarly impossible odds, despite a primary win in Indiana over Hillary Clinton.

Because, while Cruz and Sanders differ wildly on their beliefs, there are striking parallels between the way they construct their political identities and therefore their presidential campaigns. Both men are senators who consciously hold themselves at a distance from the party they caucus with, insisting that the party is stocked with a bunch of compromising sellouts. Both men insist that they represent a truer and deeper version of the organizing ideology (conservatism and progressivism, respectively). Both are believers in the idea that their side's losses are the result of quislings in their party capitulating too readily to the other side and that they would see tremendous wins, revolution even, if they just stood their ground a little more firmly.

(The big difference is Cruz managed to alienate most of his colleagues, whereas most Democrats seem to have no real beef with Sanders, which probably because the latter isn't a ginormous asshole who mistreats every person he encounters.)

Unsurprisingly, then, that Cruz and Sanders ran basically the same campaign, based around appeals of ideological purity. One of Cruz's most common tics was to call himself a "true conservative" and to imply that anyone who didn't agree with his rigid views was just a pretender. Similarly, Sanders campaigned routinely on the idea that he was the only real progressive in the race, and that Clinton's claims to hold progressive ideas were dishonest.

Both men claimed that it was this very purity that would win them elections, by turning out huge numbers of voters who had previously been checked out, due to disgust with politics as usual. Cruz was fond of claiming that 50 million evangelical voters had sat out voting for Mitt Romney, suggesting that he, as a true believer and member of their tribe, would be able to turn out those votes.

Sanders similarly argue that he would win because, "we can create an enormous amount of enthusiasm from working people, from young people, who will get involved in the political process and which will drive us to a very large voter turnout."

In both cases, we did not see this stampede of previous non-voters, impassioned by hearing a man finally speaking their ideological truth, to the polls. Non-voters just kept on not voting, something Sanders has started tacitly admitting.

But while the promised revolutions haven't materialized, that doesn't mean that campaigning on purity doesn't have its upsides. Clearly, this style can lend a certain tenacity to a campaign. Both Cruz and Sanders hung in way past there being any real chance of winning — Sanders still hasn't dropped out, even though Clinton is only 163 delegates short of what she needs to win the nomination — and what seems to fuel both of them is this stubborn sense that they should be the winner, due to the aforementioned ideological purity.

Both candidates operate under this sense that the voters are only going for the other guy because they are being hoodwinked, and all they need is some more education and they'll come around. (That's what the "New York values" and Wall Street attacks are all about.) That kind of thinking lends itself to stubbornness, since you can always convince yourself that one more pamphlet or debate is what will turn the ship around.

It's also why both campaigns have flirted with (and in Sanders's case, continue to flirt with) the idea that they can win in a contested convention, even if they lost with the majority of voters. If you believe that the reason that people don't agree with you is because they haven't had a chance to hear you out, it's easy to believe that a convention environment favors you, because all you need to do, in your mind, is simply get these folks in a conversation and they will see the light.

But the simple truth is that there hasn't ever really been much reason to think this. Both candidates have had ample time to make their case, but their opponents have still garnered a greater share of the votes. While supporters of both have endless excuses for this, arguing that the majority is either being bamboozled or bought off, the more likely explanation is that their opponents simply have a more appealing pitch to the voters.

Ultimately, Cruz and Sanders share a fatal flaw, one that is common in politics generally but becomes more pronounced in campaigns built around ideological purity: The assumption that "people like me" are more common and representative than they are, simply because you see more of them in your day-to-day life. Call it the "silent majority" fallacy, if you will. Cruz's assumption that there are millions of unacknowledged evangelicals laying in wait, ready to spring into action once activated, is likely the result of him personally knowing a lot of evangelicals and assuming they are more common than they are. Similarly, Sanders and his supporters have a tendency to speak as if the people who come out to vote for him are the mainstream, and to talk about Clinton supporters in dismissive terms, as if they are fringe or unrepresentative.

This kind of thinking makes it hard to build a coalition, because you assume that your existing constituency is enough and you don't really need to do the hard work of wooing people that are different from you. The results speak for themselves. The Cruz campaign basically ignored the millions of conservatives who aren't particularly moved by religion and the result is a losing campaign. The Sanders campaign has written off traditional Democratic constituencies, like people of color and working women, concentrating instead on turning out independents and the white male voters that they already had.

It's too late, really, for the Sanders campaign to learn much from the missteps of the Cruz campaign. But it's worth noting these similarities when it comes to future campaigns from insurgent candidates who want to hold down a position further from the center than their opponent. Believing yourself to be on a moral crusade can help you weather storms, but it can also lead to blinkered thinking and poor outreach. Cruz has admitted that he's lost this round. Sanders should probably consider doing the same.