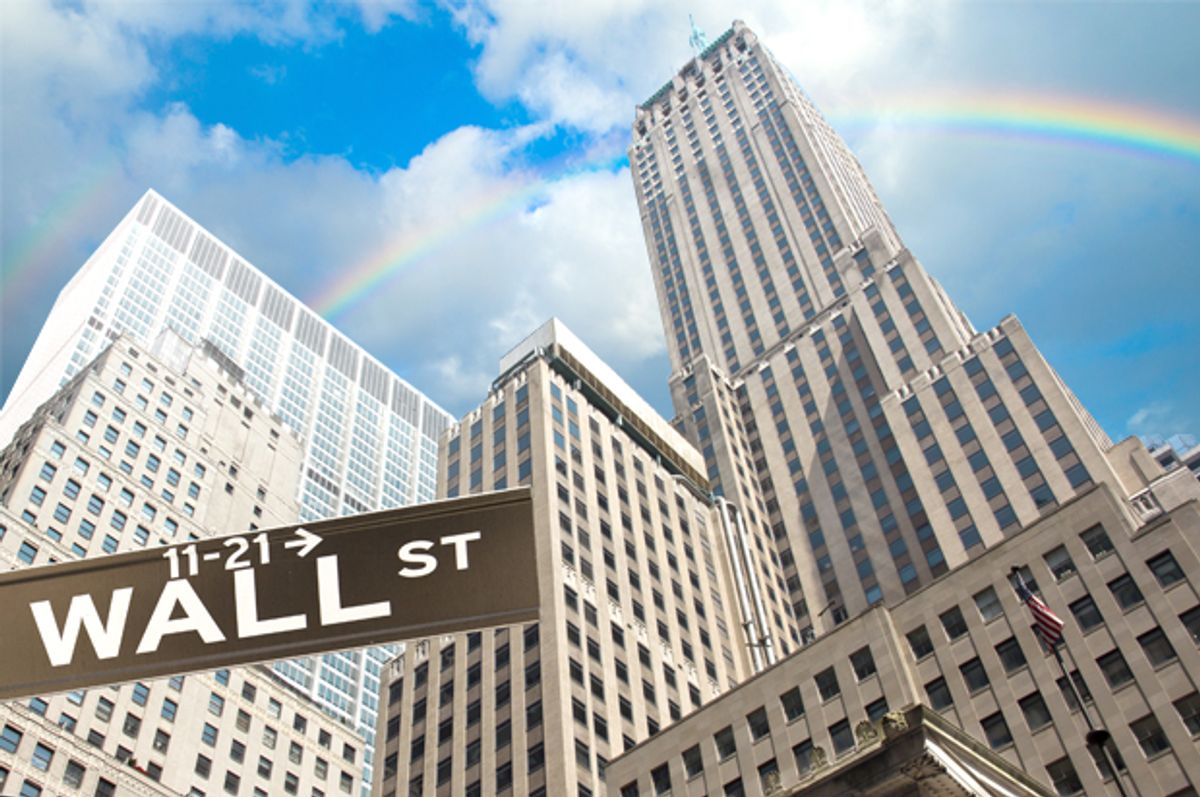 Hey, can we all just stop complaining that our government coddles Wall Street's big money-grubbing banks?

Sure, they went belly-up and crashed our economy with their frauds, rigged casino games, and raw greed. And, yes, the Bush and Obama regimes rushed to bail them out with trillions of dollars in our public funds, while ignoring the plight of workaday people who lost jobs, homes, businesses, wealth, and hope. But come on, Buckos, have you not noticed that the feds are now socking the bankers with huuuuuge penalties for their wrongdoings?

Wall Street powerhouse Goldman Sachs, for example, was recently punched in its corporate gut with a jaw-dropping $5 billion for its illegal schemes.
Wow, $5 billion! That's a stunning amount that Goldman Sachs has agreed to pay to settle federal criminal charges over its shameful financial scams that helped wreck America's economy in 2008. That's a lot of gold, even for Goldman Sachs. It's hard to comprehend that much money, so think of it like this: If you paid out $100,000 a day, every day for 28 years, you'd pay off just one billion dollars. So, wow, imagine having to pull Five Big B's out of your wallet! That's enough to make even the most arrogant and avaricious high-finance flim-flammer think twice before risking such scams, right? Thus, these negotiated settlements between the Justice Department and the big banks will effectively deter repeats of the 2008 Wall Street debacle... right?
Actually, no.
The chieftains of the Wall Street powerhouse say they are "pleased" to swallow this sour slug of medicine. It's not because they're contrite and eager to make amends. Wall Street bankers don't do contrite. They are pleased (even thrilled) because this little insider secret: Thanks to Goldman's backroom dealing with prosecutors, the settlement is riddled with special loopholes that could eliminate nearly $2 billion from the publicized "punishment."

For example, the deal calls for the felonious bank to put a quarter-billion dollars into affordable housing, but generous federal negotiators put incentives and credits in the fine print that will let Goldman escape with paying out less than a third of that.

Also, about $2.5 billion of the settlement is to be paid to consumers hurt by the financial crisis. But the deal lets the bank deduct almost a billion of this payout from its corporate taxes - meaning you and I will subsidize Goldman's payment. As a bank reform advocate puts it, the problem with these settlements "is that they are carefully crafted more to conceal than to reveal to the American public what really happened here."

Also, notice that the $5 billion punishment is applied to Goldman Sachs, not the "Goldman Sackers." The bank's shareholders have to cough up the penalty, rather than the executives who did the bad deeds. Goldman Sachs' CEO, Lloyd Blankfein, just awarded himself a $23 million paycheck for his work last year. That work essentially amounted to negotiating the deal with the government that makes shareholders pay for the bankers' wrongdoings -- while he and other top executives keep their jobs and pocket millions. Remember, banks don't commit crimes -- bankers do.

One more reason Wall Street bankers privately wink and grin at these seemingly huge punishments is that even paying the full $5 billion would only be relatively painful. To you and me, that sounds like a crushing number -- but Goldman Sachs raked in $33 billion in revenue last year, so it's a reasonable cost of doing business. After all, Goldman sold tens of billions of dollars in the fraudulent investment packages leading to the settlement, so the bottom line is that crime can actually pay -- if it's big enough.