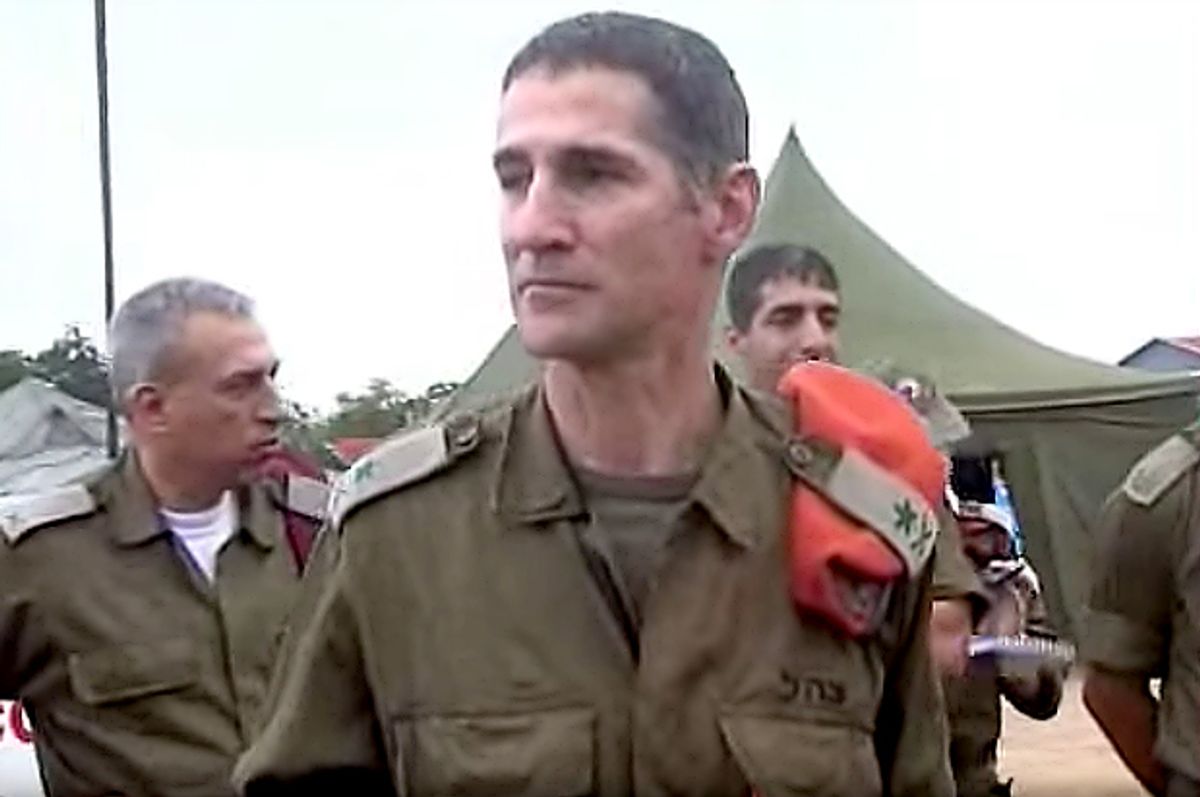 The prominent Israeli military official made parallels between Israel today and Nazi Germany in the 1930s, the Israeli media reported.

"The Holocaust should bring us to ponder our public lives and, furthermore, it must lead anyone who is capable of taking public responsibility to do so," Golan said.

"Because if there is one thing that is scary in remembering the Holocaust, it is noticing horrific processes which developed in Europe – particularly in Germany – 70, 80 and 90 years ago, and finding remnants of that here among us in the year 2016," he added.

Golan, who is deputy chief of staff of the Israeli military, known as the Israel Defense Forces, or the IDF, later walked back these remarks, after facing backlash from within his government.

Holocaust Remembrance Day is "a day of national soul-searching," Golan said, stressing that, on this day, "it is worthwhile to ponder our capacity to uproot the first signs of intolerance, violence, and self-destruction that arise on the path to moral degradation."

Later, amid heated criticism from right-wing politicians, he told Israel's Army Radio "I had no intention of comparing the IDF and the State of Israel with things that went on during the Nazi period."

"The comparison is absurd and lacks any foundation, and there was no intent to draw such a parallel or to criticize the civilian leadership," Golan insisted.

Other prominent Israeli figures have warned of the same "abhorrent processes" about which Golan cautioned, nonetheless.

Far-right Israeli lawmaker Miri Regev proudly proclaimed in a TV interview that she is "happy to be a fascist." Regev, a former brigadier-general in and spokesperson for the IDF, is now Israel's minister of culture.

As Salon has reported before, renowned Israeli journalist Gideon Levy has warned Israel is witnessing the rise of fascism — and he does not use the term lightly.

Levy was an outspoken critic of Israel’s destructive 2014 war in Gaza, for which leading human rights organizations accused the IDF of war crimes, as the U.S. State Department has acknowledged. The journalist received daily death threats for his criticisms, and hired a body guard to protect him.

The columnist for the leading Haaretz newspaper warned at the time that he saw the “first signs of fascism” in Israel.

Since then, Levy says things have gotten even worse. The year 2015, he wrote, “heralded the start of blatant and unapologetic Israeli fascism.”

Israel's right-wing — like the right-wing in much of Europe and the U.S. — is increasingly extreme, and overtly racist. Fascistic Israeli groups like Lehava march throughout the streets and chant "death to Arabs," while organizing anti-miscegenation squads.

Benzi Gopstein, the ultra-right-wing leader of Lehava, was in April cleared of assault charges for attacking two left-wing Jews. He claimed he was acting in "self-defense" because he said he thought the men he attacked were Arabs. An Israeli court accepted Gopstein's argument, before the right-wing extremist made further threats against the Jewish leftist activists.

Gopstein has previously called Christians “vampires and blood suckers” who must be expelled from Israel.

A widely circulated photo taken by Reuters on April 19 shows an Israeli at a protest holding up a sign reading "KILL THEM ALL," effectively calling for the genocide of Palestinians.

The right-wing extremist Israeli was at a demonstration in support of Sgt. Elor Azaria, an IDF soldier who killed an incapacitated Palestinian assailant in the illegally occupied West Bank.

A video of the extrajudicial execution was published by Israeli human rights organization B'Tselem, leading to widespread coverage of the incident.

In response to international outrage, Israeli authorities charged the soldier with manslaughter. Israel's increasingly extreme right-wing, nevertheless, has demanded that Sgt. Azaria is a hero and should go free.

Gen. Golan mentioned the incident in his Holocaust Remembrance Day speech. "Improper use of weapons and violating the sanctity of arms have taken place since the IDF's founding," he acknowledged, while applauding the judicial process.

"The Holocaust, in my view, must lead us to deep soul-searching about the nature of man," said the IDF deputy chief of staff in his speech. "It must bring us to conduct some soul-searching as to the responsibility of leadership and the quality of our society. It must lead us to fundamentally rethink how we, here and now, behave towards the other."

"Most of all, we should ask how it is that we are to realize our purpose as a light unto the nations and a model society," Gen. Golan added. "Only this kind of remembrance can serve as a living and breathing monument for our people – a worthy monument, a monument of truth."