The presumptive GOP demonstrated as early as July that he was a force to be reckoned with. But many missed it 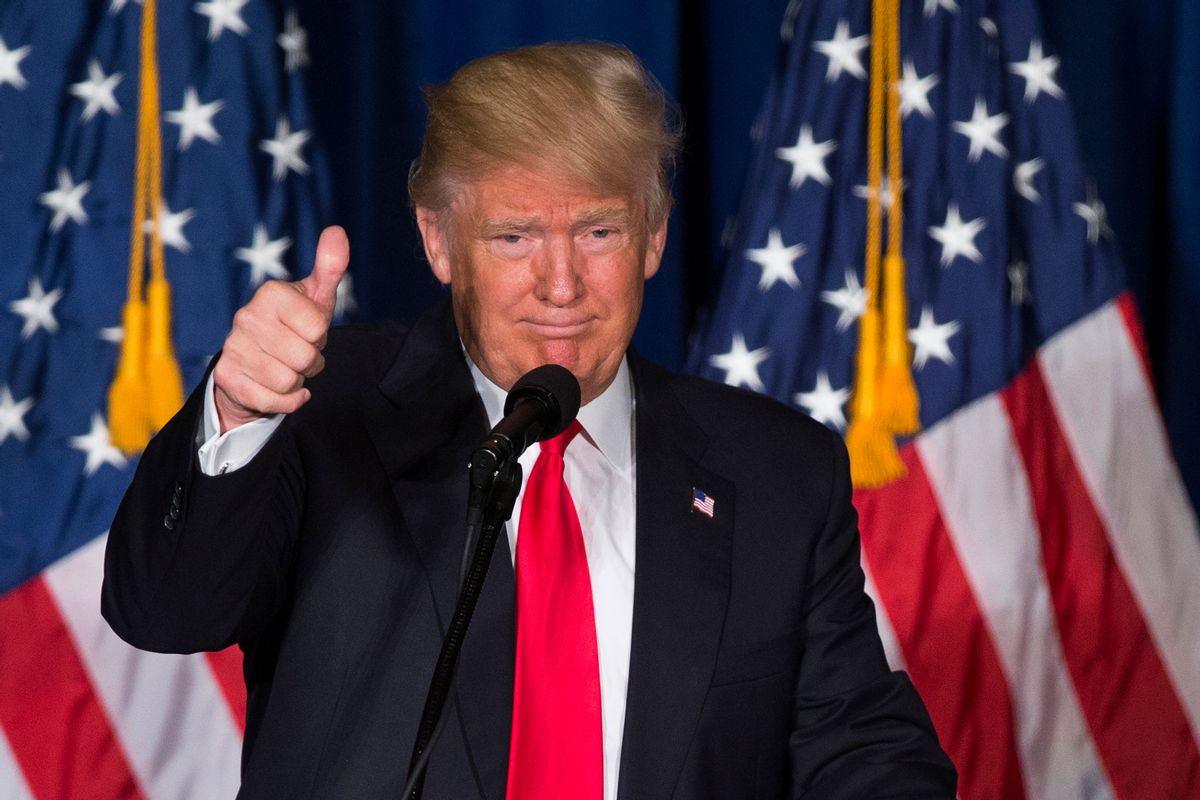 Republican presidential candidate Donald Trump gives a thumbs up after giving a foreign policy speech at the Mayflower Hotel in Washington, Wednesday, April 27, 2016. Trump's highly anticipated foreign policy speech Wednesday will test whether the Republican presidential front-runner, known for his raucous rallies and eyebrow-raising statements, can present a more presidential persona as he works to unite the GOP establishment behind him. (AP Photo/) (AP/Evan Vucci)
--

Remember Dennis Rodman? The retired basketball player with funny hair who made a series of controversial trips to North Korea and literally palled around with the country's dictator? That's the same Dennis Rodman who endorsed his old buddy from reality TV, Donald Trump, back in July 2015.

By that point, Trump had already maligned Mexican immigrants, saying that "they're bringing drugs. They're bringing crime. They're rapists." That attack was supposed to mark the beginning of the end of Trump's campaign -- or, at least, the demographic possibility he could be President.

Trump would go on to attack Senator John McCain's war record, saying of the man tortured by North Vietnam, "He’s a war hero because he was captured. I like people that weren’t captured." Insulting a war hero would surely sink Trump's fortune, the pundits said.

Only that never happened. On the contrary, that's when Trump's poll numbers among likely Republican voters started to climb, culminating in his blowout wins in a bunch of East Coast states on April 26 -- all majority wins -- followed by another solid majority win in Indiana on Tuesday. Over that time, one after another of his opponents fizzled, until, earlier this week, both his remaining opponents, Ted Cruz and John Kasich, dropped out of the race, officially crowning him the presumptive nominee.

Since the moment when a funny-haired reality star endorsed another funny-haired reality star, the GOP has made it most of the way through the five stages of Trump grief. Denial: that it could ever be possible, that such a blowhard could win their party's nomination. Anger: that Trump would insult McCain or -- worse! -- make tasteless suggestions about Fox anchor Megyn Kelly. Bargaining: when Republicans tried to get him to back off his attack on Muslim immigrants, and then, later, when a defeated Chris Christie stood in obsequious silence behind "Mr. Trump." Depression: as Republicans made #NeverTrump a hashtag, yet failed to do anything to make that happen. Many are still in that depression stage, like the almost 70 Republicans who declined to answer questions from the New York Times in recent days about how much they would support their party's presumptive nominee.

But others are coming around, begrudgingly, to Acceptance, like New Hampshire Senator Kelly Ayotte. She faces a tough re-election this year probably made harder with Trump on the ticket. Ayotte said she "plans to support" the nominee, but won't endorse him. Then there's Senate Majority Leader Mitch McConnell, who said he is "committed to supporting the nominee chosen by Republican voters," but still insisted the man who will become the party's leader has "the obligation to unite our party around our goals" (as if the GOP's preferred policies and Trump's don't differ in key respects).

About the biggest Republican snub of Trump thus far came from Jeb Bush's father and brother. Though even there, the 41st and 43rd Presidents will remain silent, and not necessarily extend the fight against the real estate mogul. But that has more to do with the (accurate) attacks Trump made on the younger George Bush's record, particularly his failure to prevent 9/11 and his disastrous war in Iraq.

Other than the Bush clan, though, Republicans seem to be coming around to the fate voters have thrust on the party.

We called this, back in the days after the Dennis Rodman endorsement. We not only called that Republicans would eventually, begrudgingly, work their way through a grieving process and ultimately focus on backing Trump to beat Hillary. But we also predicted that the more pundits and insiders attacked Trump, "as a way to try to damage the blustery billionaire," the more it would "bolster his outsider cred among voters who actually share some of the same values — even if mainstream Republicans would like to disown the most inflammatory versions thereof."

That proved especially true, in recent weeks, as voters reacted negatively to Cruz and Kasich's attempt to cooperate -- collude, Trump called it -- to deny Trump an uncontested convention. Republican voters don't want to be pushed around anymore, and efforts to do so only fed Trump's success.

There's one thing that may change this dynamic going forward, though Trump will surely try to obscure the process:

Back in July, we correctly predicted that Trump's own riches would mean he couldn't be bossed around by big GOP funders. "Because of Trump’s fortune, he cannot possibly be controlled with the monetary promises of the Kochs or Sheldon Adelson." That was absolutely true; indeed, the slosh of money in the race seems to have forestalled any more concerted attack on Trump.

But that may now change. One of the first things Trump, who campaigned against the influence of big money in politics, did after Tuesday's victory was announce he plans to raise (and spend!) a billion dollars between now and November 8. That's what will be necessary to beat Hillary Clinton, says the man who has attacked Hillary for her own big-money fundraising.

There will be a slew of private conversations in upcoming weeks -- a few of which, hopefully, will get leaked to the press -- about the terms of such massive fundraising. After withstanding the onslaught of negative spending ultimately paid by these billionaires, will Trump now accept their money? What will he promise in order to get that money? Will it provide some way -- at long last! -- for the GOP to filter what Trump says and does?

Thus far, billionaires seem uninterested in ponying up the cash.

Perhaps that's why McConnell imagines he can demand Trump fulfill certain obligations to the party. To date, Trump's own billions and his ability to dictate the media narrative has given him a resilience that Republican voters loved. But will they love Trump if he becomes just another conventional money-soaked politician?