What was so good about “The Good Wife”: After it ends this Sunday, there will never be a show like it again

The CBS drama, ending Sunday, fought against the dueling trends of Peak TV and Prestige Drama and shone anyway 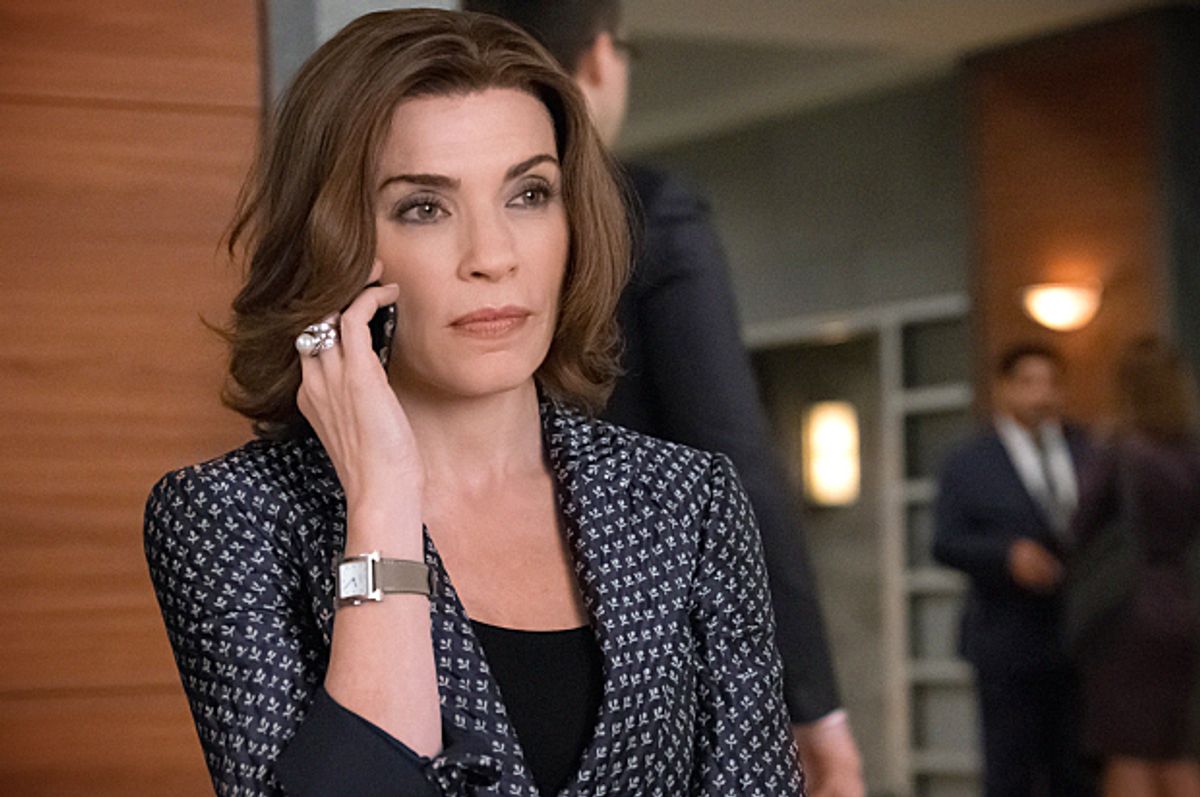 In 2014, when “The Good Wife” was coming off of its best season ever, CBS sent out mailers to Emmy voters with a cheeky little dig at other marquee dramas. The postcard had a little infographic on it, comparing the number of episodes “The Good Wife” produced for its fifth season compared to Emmy favorites like the final season of “Breaking Bad” and the penultimate season of “Mad Men.” Seeing it in black-and-white makes it a bit easier to appreciate the magnitude of what the CBS drama was accomplishing; the two AMC shows, combined, made for fewer episodes than just one season of “The Good Wife,” which clocks in at a hefty 22 episodes.

Most dramas that have come to define the Golden Age of television—and its successor, the Peak TV era we’re in right now—are slimmer cable dramas, fielding 13, 10, or sometimes even fewer episodes. The shorter length began to be an indicator of prestige, a signifier that a show didn’t have to hold itself to the strict guidelines of the broadcast television format—with its FCC censorship rules, frequent commercial breaks, and long season length. In 2014, the year of that mailer, even Netflix’s flagship drama “House Of Cards” and its hit comedy “Orange Is The New Black” produced just 13-episode seasons. The streaming service has, theoretically, an infinite amount of space to create any length of season it would like to. But the streaming platform was strategically eyeing the fan fervor and critical adulation of prestige drama. Those episode lengths sure bloated up, as James Poniewozik observes at the New York Times, but they opted for 13-episode seasons to look like the other cool kids.

But although those differences often help some showrunners create masterpieces—David Chase, David Milch, David Simon—they do not, in and of themselves, make a great television program. Similarly, while the broadcast television format doesn’t always create great dramas, it’s not a recipe for disaster, either. “Lost,” “The X-Files,” “24,” “The West Wing,” and even “Buffy: The Vampire Slayer” excelled off of the broadcast model even as prestige dramas were booming on cable. Constraints like the larger number of episodes can be a burden, but they can also work to the show’s advantage—pushing the show’s writers to fit those constraints can result in fascinating material.

“The Good Wife” is testament to the continued power of the broadcast model, even as that model has created flawed story arcs and mediocre characters. When it’s good, “The Good Wife” is a crackling character drama and legal procedural, with more formal experimentation and scintillating performances than other shows can achieve in their lifetime. The problem is that hasn’t really been good, except in brief flares of brilliance, since the end of season five. The same challenges that prompted the show to create its stellar fifth season also ended up defanging the sixth and seventh seasons, both of which struggled to get off the ground.

This is to say that “The Good Wife” could both used as an argument both for and against the 22-episode season, because while it succeeded at times, it flopped at others. On the whole, it succeeded more than it failed, and on the whole, its failures were mostly just the plateau of mediocrity. But as CBS’ mailer did in 2014, the show’s anticlimactic series finale this Sunday night after seven seasons on the air raises some interesting questions about how we measure success in this television landscape. “The Good Wife” didn’t have an antihero or progressive politics, like either “The Sopranos” or “The Wire.” It wasn’t a special-effects filled genre show that has taken root on broadcast networks—shows like “The Flash” and “Hannibal,” for example.

Instead, to the average viewer flipping through channels, “The Good Wife” was just another legal procedural, with plenty of courtroom scenes and dramatic objections. Its appeal precisely was that it took the staid old model of a lawyer show and shook it up with an appealing mix of ethical quandaries and corporate backstabbing, all while recreating what life as a high-powered corporate lawyer might really be like (expensive fundraisers, local politics, years-long relationships with rival counsel and hostile judges, and of course, the difficulties of choosing furniture for your associate’s office). Twenty-two episodes per season gave the showrunners, Robert and Michelle King, a lot of space to play with. Short-run cable series have a kind of laserlike focus, a narrative intensity that draws the viewer in for a specific length of time as the story could go, seemingly, anywhere. Broadcast dramas, by contrast, are more likely to set a certain status quo in place and then allow its characters to evolve within that framework. You don’t have to watch all 22 episodes of each season to drop in and know, more or less, where you are with “The Good Wife”; meanwhile, dropping in on something like “Game Of Thrones” is absolutely unfathomable.

What Robert and Michelle King did with “The Good Wife” was work very hard to make it both an excellent drama and a program that fulfilled every expectation of the broadcast format—whether that was the long season or standards and practices about sex scenes. It was an ambitious, impossible task, as Noel Murray explains at the A.V. Club, because every subverted expectation made the next one that much harder to earn. It was also, by all available accounts, a very difficult pace and time investment for its actors. The Kings and Margulies sat down and spoke to the New York Times about it, and when asked what it would take for her to commit to another 22-episode-per-season show, Margulies replied: “There’s no amount of money in the world.” She added:

>…it’s not just a commitment of time on set. I’d come home at the end of a 14-hour day, I have a family to tend to, and then I have nine pages of dialogue to learn. So it just never ends.

Josh Charles, who was one of the show’s pillars, departed during season five, citing similar reasons. “It’s a very long season doing a network television show, and somewhere in year 4, I kinda felt burnt out.” Behind-the-scenes tensions also led to the bizarre sidelining of Emmy-winner Archie Panjabi, and though the details of that feud are still tantalizing secrets, long hours on set can’t have helped.

One of the most interesting things about “The Good Wife” is how much the behind-the-scenes narrative of the show became a part of the show itself, as the narrative swiveled around Panjabi and Margulies’ apparent feud, wrote a swansong to Charles’ character, and then skipped and jumped through hoops to get one great guest star or another on the show for four episodes at a time. (A partial list of incredible guest or recurring actors on the show: Michael J. Fox, Maura Tierney, Jill Hennessey, Matthew Perry, Carrie Preston, Anika Noni Rose, Nathan Lane, Dylan Baker, Vanessa Williams, America Ferrera, Matthew Goode… the list goes on and on.)

The pressures of broadcast and the ambition of the showrunners meant that every bump in the road somehow ended up visible on-screen, even if, as in the case of Charles’ departure, it made for a beautiful wrinkle. For its fans, “The Good Wife” had a bit of the sensibility of a beloved band with a lot of creative energy but also interpersonal drama; there was always something happening there, and it was an exciting show to keep tabs on.

We’re not making shows like this anymore. The network drama is less profitable than ever, as users move to streaming and bingeing and away from watching live. It’s not gone completely—there’s “Empire,” of course, to break the curve—but the shows that do draw those huge same-day viewers are shows with big twists, whether that’s “Empire” or “Game Of Thrones.” “The Good Wife”’s subtler, smoldering burn isn’t quite suited for broadcast’s current trend, but the show was also quintessentially network in its sensibility, content, and format. It’s time has ended. Margulies will go on to be talented and radiant in another show; the guest stars will go back to their Broadway and off-Broadway productions. And the Kings? They’ve signed on to do a new show at CBS—a 13-episode run, naturally.