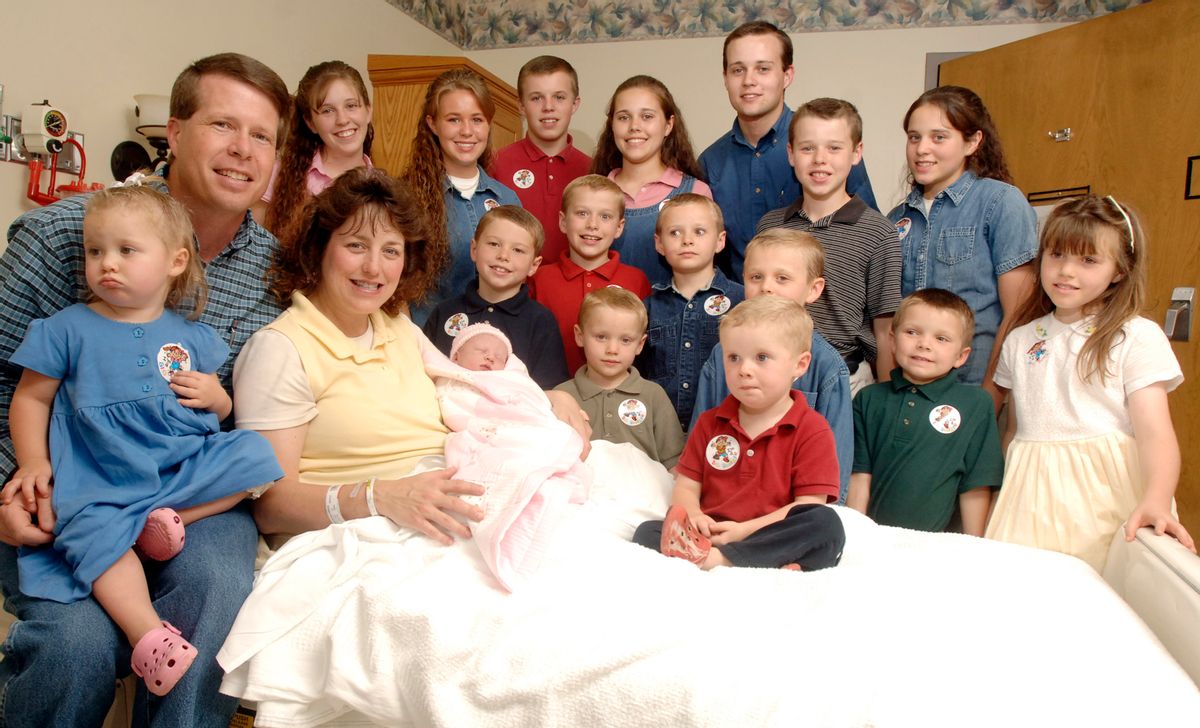 Happy news for a Friday: Once in awhile, the good guys win. This time the victory is over a scary fundamentalist cult, usually called "Quiverfull," that has been making unfortunate inroads in recent years in spreading its alarming message of extreme patriarchy, where women aren't allowed to use birth control and have no real rights, and are instead expected to live a life of complete submission to male authority. The famous Duggar family, which has seemingly innumerable shows on TLC, has been surprisingly successful at shining up the public image of this miserable cult, even though they have recently had a setback with the revelation that the eldest son, Josh Duggar, molested his sisters as a kid.

Wednesday, writer Vyckie Garrison, who escaped the Quiverfull lifestyle herself some years ago, wrote a piece for Raw Story exposing the plans of some Quiverfull devotees to hold a retreat in Wichita, Kansas for the purpose of parents finding people to marry their children off to. Yes, in America in the 21st century, these folks were going to get together to force marriages for their children. Marriages those children aren't really going to have much, if any, say about.

"Quiverfull patriarch, Vaughn Ohlman, who runs a website promoting early, “fruitful” marriage for Truly True Christian™ children," Garrison writes, "has announced plans for a “Get Them Married!” retreat where fundamentalist fathers will find, and TAKE, suitably submissive young brides to bear many babies for their adolescent sons."

There can be no real doubt that the intention of this event was arranged marriages for teenagers. On his website, Ohlman argues that "marriage (in order to be timely and to accomplish its purposes) ought to happen before the age of twenty for almost everyone." While denying that he would marry girls of 12 off, he argues that once her breasts develop and her body is "physically mature enough to handle" childbirth "without damage", it's time for her to marry.

And as for how much say the kids have in this matter, read this passage from Ohlman's site:

Scripture speaks of the father of the son “taking a wife” for his son, and the father of the bride “giving” her to her husband (Jeremiah 29: 6; Judges 21: 7; Ezra 9:12; Nehemiah 10: 30; 1 Corinthians 7:36-38). It gives example after example of young women being given to young men, without the young woman even being consulted, and often, in some of the most Godly marriages in Scripture, the young man is not consulted....

Then, the son or daughter, must “consent” to the marriage—but it is very important to realize that this type of “consent” is the kind of obedient consent we see in the examples of Adam, Eve, Isaac, Rebecca, and Christ. It is consent where the son or daughter, realizing that their father has bound them and then submits to the covenant as binding, recognizing the good gift their father has given them.

They're allowed to say yes but they can't say no. Which is to say that his version of "consent" is not consent at all.

After Garrison wrote her piece, apparently many readers started calling the Salvation Army, which had rented out the space to Ohlman for his retreat. Upon discovering they were about to play host to an event centered around arranging marriages for teenagers, the Salvation Army pulled the plug.

"The Salvation Army has denied a request by the Let Them Marry organization to conduct its event at Camp Hiawatha," the Salvation Army explained in a statement. "Our decision is based upon our long-standing concern for the welfare of children."

Now Ohlman and his Quiverfull crew are feeling the heat. "Note: Contrary to vicious internet rumors we do not support or in any way condone child sexual activity of any sort, child marriage, or any other illegal activity," his website reads at the top. "Nor do we support or condone forced marriages. We believe that parents should NOT seek a spouse for a child where that child has not actively sought for the parents to do so."

There is reason to be skeptical of these disclaimers, however. The claim that the child is supposed "actively" seek marriage first, for instance, doesn't comport with the rest of Ohlman's website.

For instance, in his FAQ, Ohlman says that "when they are of an age where marriage is appropriate for them," a child's father "should agree with another father as to their betrothal". Only after the fathers agree to the marriage, the father "should again go to his own child to assure himself of their integrity of purpose before announcing their new betrothed spouse to them."

The language is deliberately flowery, but the meaning is clear enough: Fathers decide unilaterally for children when they marry and to who. Ideally, while the children are still minors and have very little power to resist, to boot.

As for the legality of this, Ohlman's doing a little tap-dance with this. In the state of Kansas, there is no age requirement to marry if your parents give you permission to do so.  So if the folks in his Quiverfull cult want to marry a 14-year-old to an 18-year-old, so long as the parents of the 14-year-old give "permission", then it's legal.

The cancellation of this event is a victory, but sadly, it's a small one. The sad truth is there are  not enough safeguards in place to keep abusive religious fundamentalists like Ohlman and his followers from treating children like this. Yes, forced marriage is illegal, but we're talking about minor adolescents here. The fact that they formally "consent" means very little, when they know that saying no is not an option.

These are kids who are usually homeschooled and kept separate from the rest of the world. They don't have a lot of options if they reject their parents' teachings: Few places to go, no real way to make a living. This event should be a wake-up call about how serious this situation is, and there needs to be more direct interference to keep these folks from pushing underage teenagers into arranged marriages.