Our awful elites gutted America. Now they dare ring alarms about Trump, Sanders -- and cast themselves as saviors 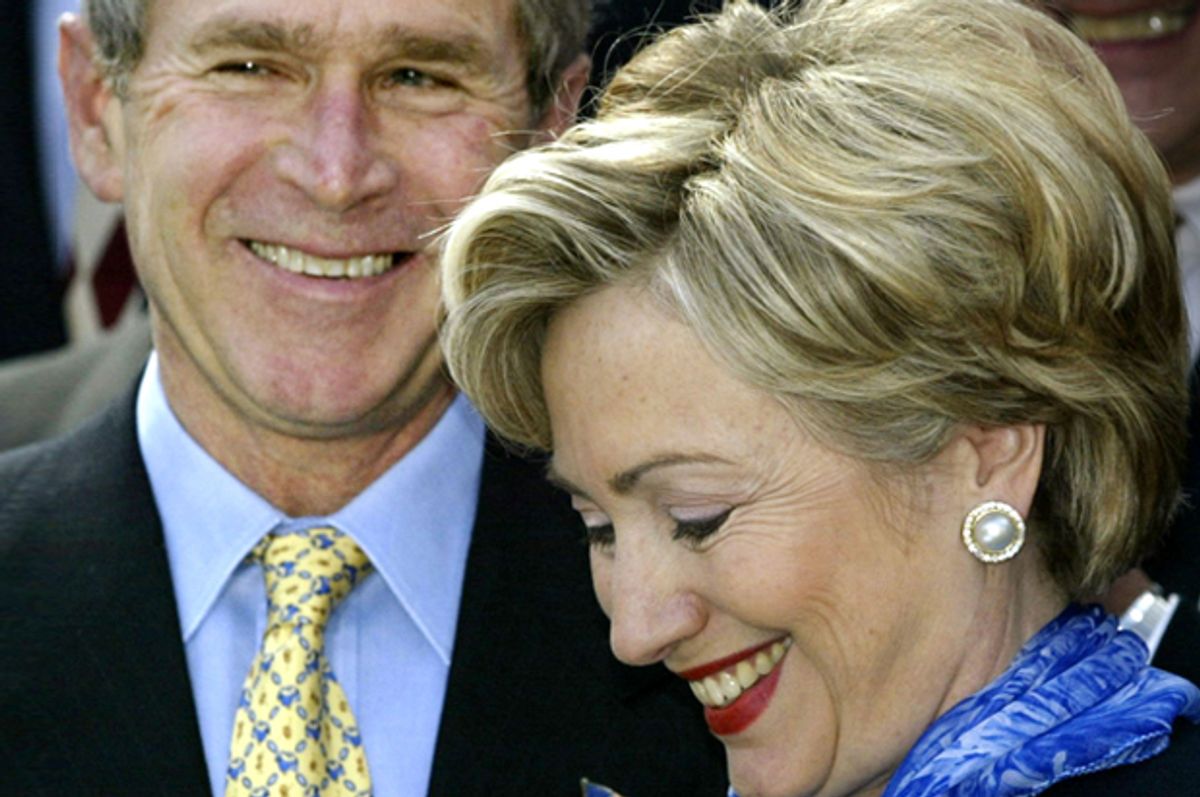 This week, on the night of the Indiana primary, I read one of the most loathsome political screeds it has been my misfortune to encounter.

It was an alarm bell raised by Andrew Sullivan, arguably the greatest hypocrite of the Bush era, on par with his partner in many crimes Christopher Hitchens (remember “Islamofascism?”). Sullivan proclaims that the election of Trump would be an “extinction-level” event. Well, perhaps it will be.

But the extinction Sullivan is most worried about is clearly that of his own breed of callous elites, who could care less about normal human beings who do not have decent jobs and who live in crappy housing and who are so desperate to find a way out of the trap that even someone like Trump starts sounding rational to them.

Now this panic alert, designed to get us in line behind Hillary, is raised by the man who ended The New Republic as we knew it (which then went on to end and then end again), promoting racist and imperialist dogma during his reign at the magazine in the 1990s, and then, with his finger in the wind (which to him and that other arch-hypocrite Hitchens meant being like George Orwell), turned into one of the biggest shills for the war on terror, the Iraq war, the whole works, all the while denouncing the fifth column within our ranks. This so-called journalist, who has no record of liberal consistency, who keeps shifting to whoever holds moral power at any given moment, is scaring us about the mortal threat that is Trump.

No, the danger is the elites, who have made such a joke of the democratic process, who have so perverted and rotted it from within, that the entire edifice is crumbling (to the consternation of the elites). Both parties are in terminal decline after forty years of ignoring the travails of the average worker (the Republicans admit they’re in the intensive care unit, while the Democrats calling for Sanders to quit already have yet to come around to admitting that they might have the flu), and voters on both right and left have at last—and this is a breath of relief—stopped caring about the cultural distractions that have kept the elites in power. No, they want their jobs back, even if it means building a wall, keeping Muslims out, deporting the illegals, and starting trade wars with China and Japan—because what else did the elites give them, they’re still opposing a living wage!

Sullivan comes right out and says it: it’s all because of too much democracy, the same bugbear elites on both sides have been offended by since the “crisis of excess democracy” in the mid-1970s, the same lament that Sullivan’s masters in the ivory tower, Samuel P. Huntington and others, have been leveling ever since they made it their job to put the exuberance of the late sixties and early seventies to rest once and for all. So they engineered the neoliberal revolution, where the “qualified” elites are firmly in charge, and the only way to get ahead is not democratic (or individualist) unpredictability—and who is a greater exemplar of unpredictability than Trump?—but elite planning, a certain coldhearted “rationality” that is as efficient as any totalitarian system ever was in sidelining those who do not have what it takes to succeed.

So, the problem, according to all the elites, is too much democracy. Thank you Andrew Sullivan, a Harvard humanities education—all that Plato you read!—was hardly ever put to worse use in the four-hundred-year annals of the institution.

You, Andrew Sullivan, and the Democratic party flacks who want the Bernie supporters to throw our lot behind the most compromised Democratic candidate of all time, Hillary Clinton, and you, who are so worried about the wall and the ban on Muslims and the attack on civil liberties, will you please tell us who started it all?

You’ve all now, the elite punditocracy on either spectrum, suddenly become nostalgic for George W. Bush, because he didn’t—well, not always—use the crude and blatant vocabulary that Trump deploys to demonize Mexicans and Arabs and Muslims and foreigners. But Bush is the one who actually implemented, with your full support, plans to surveil, discriminate against (in immigration proceedings), and impose a de facto bar on Muslims from the “wrong countries” that is still, under Barack Obama, a severe disability on Muslims who may want to emigrate to this country.

Where were you elites when Barack Obama, Hillary Clinton, and the Democratic party elite spoke as one with Republicans on endlessly strengthening border security, on the need to mercilessly enforce immigration laws, on imposing such punitive measures against potential legalization that it becomes possible only in theory not in reality?

The natural conclusion of these ideas is the literal wall, but Trump didn’t start it, he’s only putting the finishing touches on the discourse that you elites, on both sides, have inflamed for twenty-plus years. Bill Clinton started the demonization of immigrants—legal immigrants were made ineligible for benefits—for the first time since the liberalization of immigration laws in 1965. Bill Clinton ended welfare, tapping into racist discourse about African Americans, and permanently unmoored millions of people from the social safety net. No, Trump didn’t start any of it, Paul Begala and Karl Rove, representing both parties, and the elite interests they represent, poisoned the discourse.

Elites on both sides insisted on not addressing the root causes of economic dissatisfaction, hence the long-foreseen rise of Trump. Paul Krugman, a Hillary acolyte, is nothing more than a neoliberal, whose prescriptions always stay strictly within orthodox parameters. Yet he was construed as some sort of a liberal lion during the Bush and Obama years. Not for him any of Bernie’s “radical” measures to ensure economic justice and fairness. Oh no, we have to stay within the orthodoxies of the economics profession. Now he’s all offended about Trump!

The worst offenders of all are the American left’s cultural warriors, who daily wage some new battle over some imagined cultural offense, which has nothing to do with the lives of normal people but only the highly tuned sensibilities of those in the academic, publishing, and media ecospheres.

To manipulate them, the Democratic and Republican elites have both played a double game for forty years and have gotten away with it. They have incrementally yet quite comprehensively seized all economic and political power for themselves. They have perverted free media and even such basics of the democratic process as voting and accountability in elections. Elites on both sides have collaborated to engineer a revolution of economic decline for the working person, until the situation has reached unbearable proportions. The stock market may be doing well, and unemployment may theoretically be low, but people can’t afford housing and food, they can’t pay back student loans and other debts, their lives, wherever they live in this transformed country, are full of such misery that there is not a single word that an establishment candidate like Hillary Clinton or Jeb Bush says that makes sense to them.

This time, I truly believe, there’s not a dime’s worth of difference between them. When they did have a difference to choose from—i.e., the clear progressive choice, Bernie over Hillary, who consistently demonstrates beating Trump by double the margins Hillary does—the elites went for Hillary, even though she poses the greater risk of inaugurating Trump as president. And now you want us to listen to your panic alarms?

The game, for the elites, is over. This is true no matter what happens with the Sanders campaign. The Republican party as we have known it since the Reagan consensus (dating back to 1976) is over. The Democratic party doesn’t know it yet, but Bill Clinton’s neoliberalism (and what followed in his wake with complicity with Bush junior, and the continuation of Bush junior’s imperialist policies with Barack Obama) is also over, or well on its way to being over. The elites are in a cataclysmic state of panic, they don’t know whether to look right or left, they have no idea what to do with Trump, they don’t know what to do with the Bernie diehards, they have no idea how to put Humpty Dumpty together again.

And these same elites, both liberal and conservative, these same journalists and celebrities, became quite comfortable with Bush once the war on terror was on. They’ll get used to Trump too, his level of fascist escalation will soon be presented by The Times and other institutions as something our democracy can handle, just as they continually assured us during those eight years of gloom that our democracy could easily take care of Bush. We, the citizens, don’t need to get our hands dirty with implementing checks and balances, the elites will do it on our behalf. Soon, once he starts talking to the elites, you won’t even be that afraid of Trump. Wait, he’s the one who wants to make America great again, and what’s so wrong with that?

The election of Trump would end the Republican party as we know it, but more refreshingly it would also end the Democratic party as we know it. The limits of the academic left’s distracting cultural discourse in keeping economic dissatisfaction in check would be fully exposed. Trump threatens the stability of the fearmongering discourse of Sullivan and his like. The threat to their monopoly of discourse is the real reason for the panic.

Oh, and Hillary, good luck fighting Trump with your poll-tested reactions. Your calculated “offenses” against his offensiveness against women or minorities or Muslims are going to be as successful as the sixteen Republicans who’ve already tried it. You won’t be able to take on Trump because you do not speak the truth, you speak only elite mumbo-jumbo. Trump doesn’t speak the truth either, but he’s responding to something in the air that has an element of truth, and you don’t even go that far, you speak to a state of affairs—a meritocratic, democratic, pluralist America—that doesn’t even exist.