The glory of the beard: It's the one bandwagon politicians can't jump on

Stewart, Letterman, Stipe, and your local mixologist all sport one, but even Paul Ryan gave in and shaved 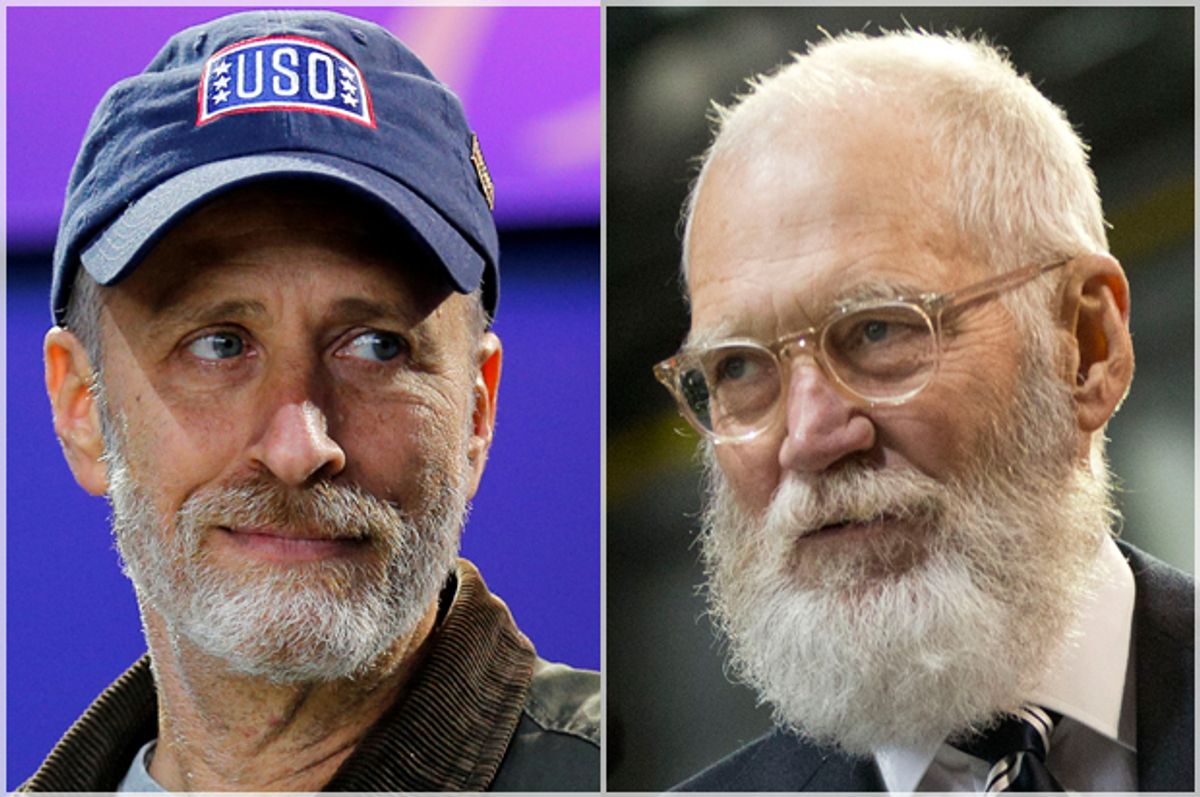 The beard has been a major pop culture signifier for a while now – at least since the rise of facial hair on Brooklyn hipsters and Hollywood actors. There are all kinds of delineations – from Crisis Beards to Charity Beards to Off-Season Beards. A few months back, the delineation between Retirement Beards and Achievement Beards became a topic worthy of tea-leaf reading.

But the most noticeable rift in American life now is that while the beard has become prominent on all kinds of men in pop culture and the arts, it continues to be a stranger in U.S. politics.

It became clear last night when Jon Stewart and David Letterman both came out to salute the USO at an Air Force base in Maryland. Both are retired, but Stewart, at least, seems to have a perfectly respectable, well-trimmed face that would not get him kicked off the air or out of a corporate office. Letterman’s is a bit woolier. Either way, these days, the beard can mean a lot of things – rural casualness, hipster parody of rural casualness that is effectively urban formality, alt-country cool, sloppily and defiantly uncool, and so on – that it becomes an open signifier. Michael Stipe’s beard – which I sat almost next to at a restaurant over the weekend – is so long it seems to encompass all of these things at once.

Which is why it’s a bit puzzling that no prominent politician right now sports a beard of any kind. Joe Biden, who also spoke at the USO event, is clean-shaven. Paul Ryan grew a beard early in his speaker-hood, and was self-conscious enough to wonder aloud whether he was the first speaker to sport one (he turned out to be the first in almost a century.) But at the beginning of this year, Ryan shaved his, tweeting, "Fresh year. Fresh start. Fresh shave."

Despite the fashion for it, we still seem to have a mostly unconscious sense that the beard is either a) for hippies, b) dandyish and thus not manly enough for politics, or c) for lazy people who want to provoke others. Letterman nodded in that ornery direction in his interview with Montana’s Whitefish Review:

I used to say, every day, “I am so sick and tired of shaving.” I had to shave every day, every day, for 33 years. And even before that when I was working on local TV. And I just thought, the first thing I will do when I am not on TV is stop shaving. And everybody hates it. My wife hates it. My son hates it. But it’s interesting. I’ve kind of developed a real creepy look with it that I’m sort of enjoying. And I can tell that people are off-put by it. And the more people implore me to shave, the stronger my resolve is to not shave.

The political beard in recent history goes back to Al Gore, who grew one after his defeat and as a sign of his hibernation. Leaving politics = grow beard. It’s part of a long tradition of politics and facial hair not really getting along. Queen Elizabeth taxed beards in an effort to discourage them, and Peter the Great did, too. Besides a vogue for them in the U.S. in the decades that flanked the Civil War, they’ve been out of our political life for a long time now. (You have to go back to James Garfield to find a U.S. president who wore a beard during his entire presidency.)

So this is why I’m hoping Barack Obama grows one – and maybe before he leaves the White House. If Obama truly doesn’t give a damn any more, and wants to show the world, he can bring the beard in from the world of culture and make it safe in Washington in a way that it hasn’t been since the 19th century. With either Hillary Clinton or closely-shaved Donald Trump poised to take office in January, it could be the last Gives No Fucks Beard in the Oval for quite some time.