When director Rob Reiner appeared on the MSNBC morning show, he promptly (and deservedly) embarrassed its hosts 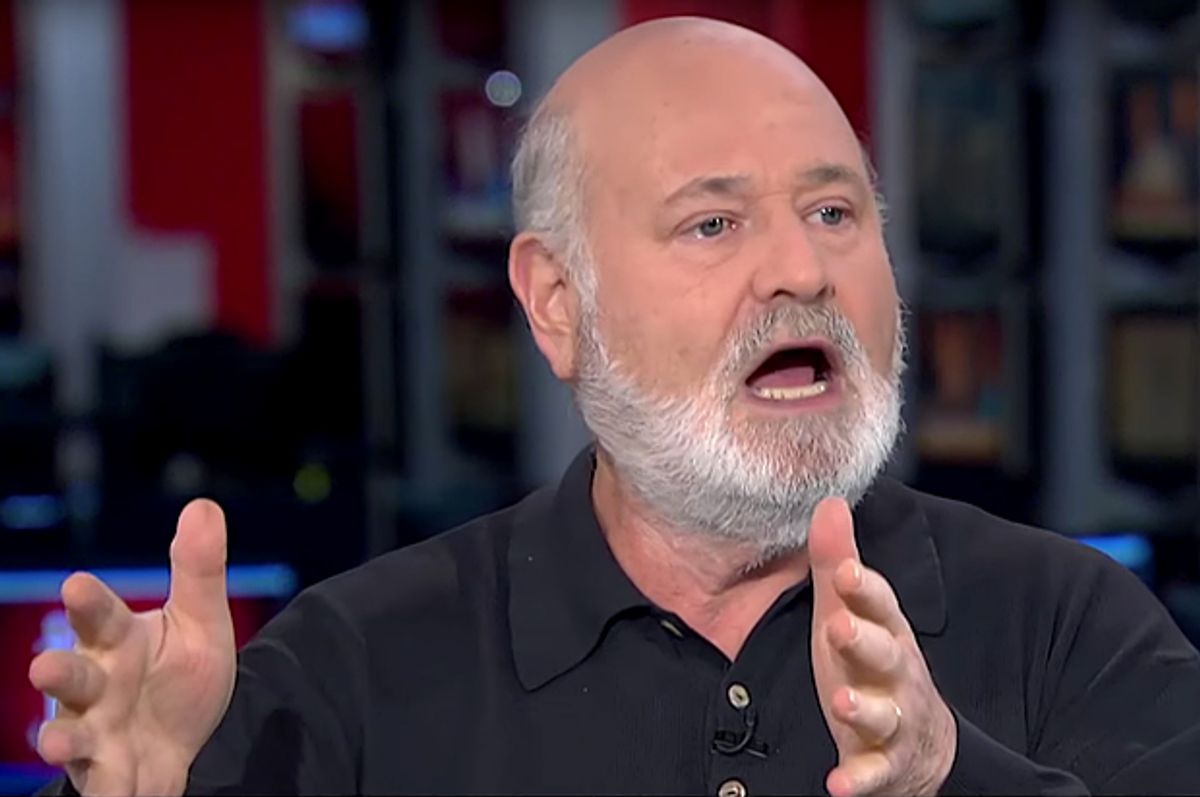 Among the many, many, many, many reasons I never watch MSNBC’s “Morning Joe,” the big one is that I can hear a more informed conversation about politics and culture by eavesdropping on the group of middle-aged and elderly patrons who gather at my neighborhood Starbucks every morning. (It is no coincidence that “Morning Joe” once had a sponsorship deal and its own branded coffee from Starbucks.) However, if for some insane reason I am seized with the need to hear the conventional wisdom as divined by a bunch of smug cool kids who picked it up by staring out the windows of the Acela or the chauffeured town cars driving them in from their multimillion-dollar houses in Connecticut, I’ll turn on MSNBC’s answer to a morning-zoo crew.

Every once in a while it seems even the guests on “Morning Joe” feel a need to push back on the insular world in which the show’s regulars live. And every time, said regulars verify our biases by acting shocked -- shocked! -- that there exists a world where, say, people do not view Donald Trump as a jovial patriot or think the only difference between his campaign and Hillary Clinton's is the number of zeroes in the candidates’ checking accounts.

If you want a perfect display of the utterly annoying both-sides-do-it need for balance that has driven “Morning Joe” to help normalize Trump’s campaign rhetoric, watch Rob Reiner’s appearance on the show on Thursday. It’s strange to see a longtime Hollywood celebrity make the zoo crew look like oblivious hacks, considering that the entertainment industry rivals politics in its overinflated sense of self-importance. But somehow, the cast of “Morning Joe” pulls it off.

Reiner is a longtime Democratic activist and champion of liberal causes, so naturally, after some discussion of a new movie he just directed about a teenager battling drug addiction, the conversation turned to the presidential race. Reiner reiterated his support for Clinton, and then tried to express a certain frustration with reporters who, when interviewing Trump, have not sufficiently held his feet to the fire in getting him to explain some of his crazier statements:

Reiner is not the first person to level this criticism at Joe Scarborough and co-host Mika Brzezinski over their often-fawning interviews with Trump. As Eric Wemple documented for the Washington Post some months ago, there is a certain “bonhomie” that has developed between the hosts and the candidate over the course of dozens and dozens of interviews and on-air phone calls, which makes them look more like fans than journalists. So even when they get frustrated with Trump and cut his mic or hang up on him mid-interview, the moment plays more like a family squabble than a moment of journalistic truth-telling. You always know that, by tomorrow, the three will have made up and Trump will be calling into the show again, and the hosts will allow themselves to be disarmed by his charming manner and one-liners.

Naturally, Scarborough and Brzezinski defended themselves, claiming that they have tried to pin Trump down on some questions, only to have him talk circles around them. Which doesn’t exactly make them look good, especially since, having been embarrassed in their efforts to be journalists, they keep asking Trump to come back on the show again and again and again. Have a little pride, folks.

Reiner’s ranting also drew the defenses of “Morning Joe” regulars Mark Halperin and Willie Geist. First Halperin, who seemed to be trying to make a point about the difficulty of pinning politicians down on specific policy questions, asked if Reiner knew Clinton’s position on raising the minimum wage. (He did, even if his explanation was a bit inelegant.) Then Geist and Reiner got into it on the question of racism in Trump’s campaign:

REINER: Well, there are a lot of people who are racist.

You should really watch the clip, just for the sight of Willie Geist’s mouth hanging open in shock. The very cheek of Rob Reiner to suggest that some of Trump’s support comes from racism!

Geist and the rest of the crew cannot seem to believe that one can ask a policy question of a guest and get a fairly straight answer. They cannot seem to wrap their heads around the widely reported fact that Donald Trump is drawing a great deal of support from white nationalists and white supremacists. They cannot get over the possibility that Trump has been using coded and not-so-coded appeals to xenophobia and white supremacy, and a Hollywood actor wishes they would do more than shrug, throw up their hands, and say, “Oh well. Great to have you on the show again as always, Donald!”

Donald Trump declared his candidacy 11 months ago, he has been endorsed by David Duke and the Ku Klux Klan, and somehow the possibility that a lot of the people who are voting for him are responding to racist dog-whistles surprises journalists who are supposed to know this stuff. But because the racism Reiner refers to does not involve turning firehoses on civil rights marchers or setting crosses on fire on the lawns of African-American families, they are shocked to have this knowledge pierce their bubble. That said piercing is done by a member of the Hollywood elite that so often gets derided for its “limousine liberalism” only makes the whole spectacle sadder.