It's worse than just the 1994 crime bill: The Clintons, criminal justice and the damage of '90s crime politics 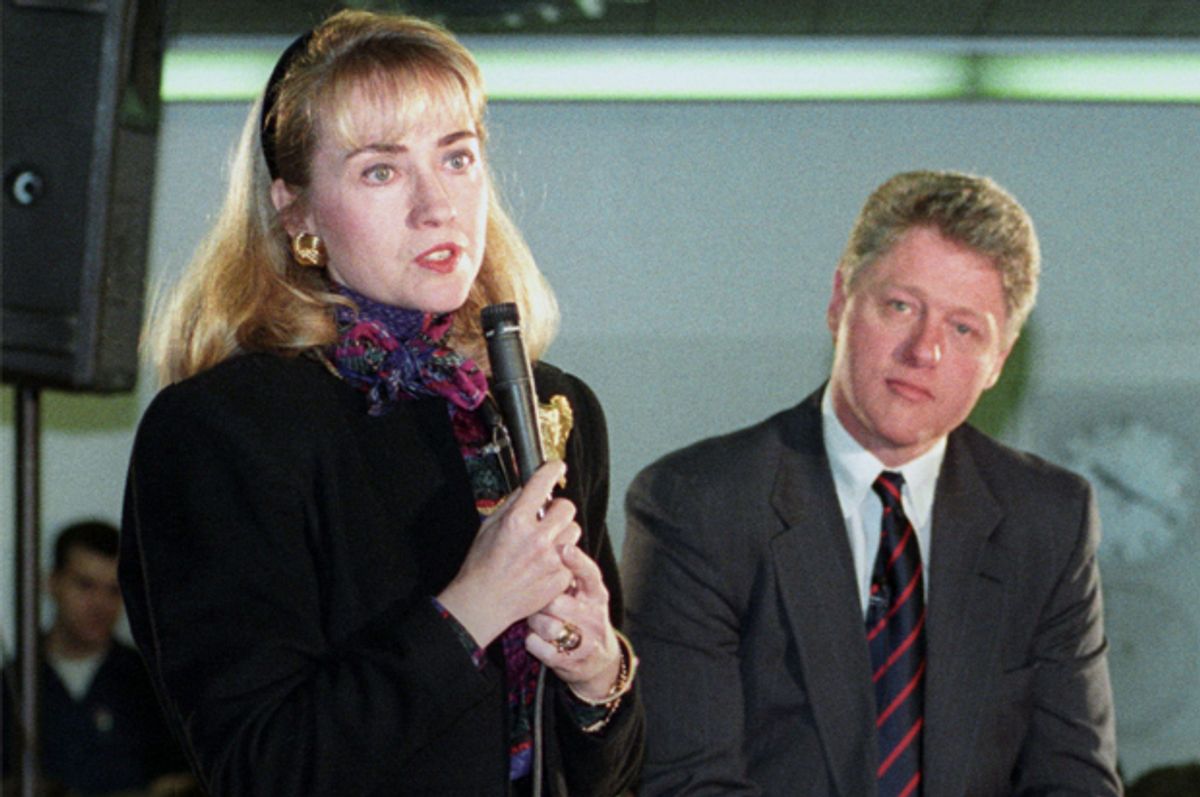 The nineties are back. Over the past few months, FX has introduced a new generation of viewers to the O.J. Simpson trial (and reminded the rest of us of the lurid details we had forgotten). HBO has transported us to an era of Seinfeld and shoulder pads in order to re-enact Anita Hill’s testimony in the Clarence Thomas confirmation hearings in Confirmation. And, as the likelihood of a second Clinton presidency increases, we find ourselves re-litigating the criminal justice debates that took place when the first Clinton was in office.

These debates are critically important to mending our broken criminal justice system, but too often they remain incomplete. Commentators have keyed on the ’94 crime bill (the Violent Crime Control and Law Enforcement Act of 1994, to be exact), a sweeping piece of legislation that directed more money to law enforcement and amped up penalties for a range of offenses. In a much-publicized confrontation at a campaign stop, Bill Clinton sparred with protestors who criticized the ’94 bill. Clinton defended the Act, doubling down on ’90s-era rhetoric about violent crime and safe streets.

The bill is a worthy target of attack, but the critique shouldn’t end there. Focused on a specific detail or data point, current conversations overstate one piece of legislation and understate the range of policies that helped drive the decade’s staggering incarceration rates. By expanding the focus of the debates from the bill to a broader range of Clinton-era policies, we can draft a blueprint for fixing the damage wrought by decades of tough-on-crime politics.

Whether the ’94 bill was as harmful as critics contend and what Hillary Clinton’s support for it says about her are both important questions. But too many of the contemporary debates miss the Act’s place in a broader pantheon of federal criminal justice policies of the 1990s. Two other Clinton-era bills deserve more attention: the Antiterrorism and Effective Death Penalty Act (“AEDPA”) and the Prison Litigation Reform Act (“PLRA”).

Passed in April 1996, both laws addressed the perception that federal courts were spending too much time and too many resources “micromanaging” the states’ criminal justice systems. These bills shaped the current system at both the state and local levels.

Aimed at curbing federal civil rights suits brought by incarcerated litigants, the PLRA erected a set of structural barriers. The law made it more difficult for indigent plaintiffs to challenge the conditions of their confinement or their treatment at the hands of correctional officers in state prisons. As Ian Head has recently noted, “The law makes invisible the struggles of prisoners who advocate for themselves, punishing them if they choose to litigate, blockading them from receiving outside legal help, and minimizing the availability of real justice for the few who do prevail in a court of law.”

Like the PLRA, AEDPA aimed to prevent federal judges from second-guessing criminal justice decisions in the states. While the Act includes a number of provisions related to terrorism, its most lasting impact is in restricting the ability of federal judges to vacate state criminal court decisions. The law imposed a higher standard for when a federal judge could grant a petition for a writ of habeas corpus (i.e., a declaration that a defendant had been convicted and incarcerated wrongfully).

The problems posed by both laws are technical and located in the inner workings of federal courts and judicial decision making. So, it’s hardly surprising that politicians and voters have not keyed on these laws in the same way that they have the ’94 crime bill. But these laws are critically important to the operation of the criminal justice system. And, their repeal would go a long way to addressing some of issues that plague the carceral state.

Why? First and foremost, both statutes explicitly target and shape criminal justice policy in the states. The states – not the federal government – do most of the incarcerating. Therefore, a federal statute that governs state court defendants and those housed in state prisons stands to have a much greater effect than a law aimed at the federal system.

Second, both laws have failed in their stated purpose. Legislative debates from 1996 reveal concern that federal courts were devoting too many resources to the management of state criminal matters. As the Contract with America sought to create a more efficient government, the laws represented a belief that federal courts were behaving inefficiently (and perhaps overstepping their authority).

But, if AEDPA and the PLRA were implemented to curb the reach and workload of federal courts, they should be viewed as a resounding failure. That is, the statutes didn’t get any of these cases off federal court dockets. The laws simply shifted the way in which courts should address them. Put simply, the laws stack the deck in favor of upholding the decisions of state actors. So, federal courts still spend an enormous amount of time on state criminal justice issues; they just are less likely to rule in favor of criminal defendants or civil rights plaintiffs. Rather than letting decisions below stand untouched, the laws effectively require federal courts to rubber stamp the potentially dubious conduct of state judges and prison officials.

There is no doubt that the ’94 crime bill was important. Still, it’s important not to lose sight of the forest for the trees (even if one tree has proven particularly poisonous). Taking on the ugly reality of ’90s criminal justice policy should mean addressing a broader range of policies – policies that continue to shape millions of Americans’ interactions with the criminal justice system. Rethinking the structural decisions of ’90s politicians might help us find a better way to reduce and reform the system that we have inherited and to avoid repeating a decade’s worth of mistakes.