My not-so-maternal instinct: I refuse to lie to my kids

Comforting your child is a core responsibility of parenting, and of course I do—but not at the expense of the truth 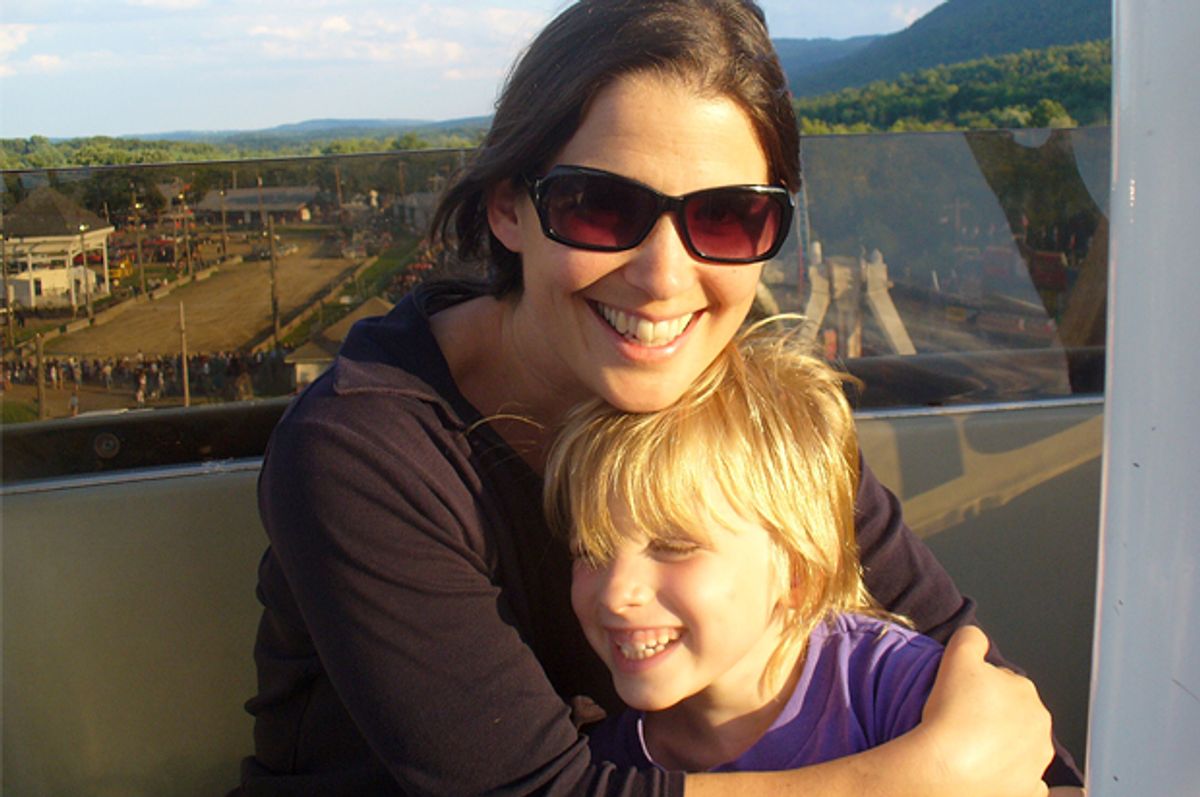 A photo of the author with her son.
--

It was my younger sister’s 40th birthday party; she had just told us—her parents, sisters, brothers-in-law, niece and nephews—that she was pregnant. While she mingled with her other guests, we tittered over the news. My youngest, age 9, jumped up and down. “Isn’t it wonderful?” beamed my father. I agreed that it was. He grinned at me: “Maybe it will even make you maternal.”

What? “I’m maternal,” I squeaked. We were on a boat; it was windy; no one heard me. I eyebrowed a plea to my 14-year-old, perched next to me, but he was busy chuckling at something else his grandfather said. I wanted to put my arm around my son’s shoulders—I loved to put my arm around those man-boy shoulders—but I thought the gesture of affection might now appear suspect.

I know my father thinks my kids are great and that I am a good mother. So what’s he saying? How can he think those things and also think I’m not “maternal?” When I posed that question to my husband, he said, “Come on. You know exactly what he means.”

Not even the dictionary knows what he means. “Like a mother,” it says, helpfully. The answer’s in the synonyms: nurturing, devoted, comforting.

That’s me! I nursed for years! I bake for love! As for comforting, I consider that to be one of the two core responsibilities of a parent. The job has 1,247 duties and responsibilities and counting (#736: taping sheet music back together after a frustrated young musician has torn it to bits), but only two of them make me feel like a mother, stilling my constant motion with the awareness of my awesome and reverberating power. Giving comfort is one of those core responsibilities.

The other is answering honestly. And that may be where “maternal” and I part ways.

Moms are not supposed to be honest with their kids. Not all the time. Hiding one’s own wild teen antics from one’s children is practically a sitcom trope. And so is the fast-thinking fib in response to a child who asks, “Where do babies come from?” I once listened to an entire garden party of moms boast about the clever ways in which they had either avoided that question or answered it misleadingly.

Finally, I said, “Oh I just tell my kids in great detail how it all works until they get bored.” Appalled silence. Did they think I demonstrated how babies were made?

Maybe I should have been slightly less honest with the moms. But I have a horror of lying to my kids, even when the lie is useful or fun. I could not call orzo “rice” just so it would be familiar enough to eat. I could not pretend an imaginary being had flown in during the night to purchase a baby tooth.

Bit of a killjoy, but no big deal, right? Sometimes, though, moms are expected to lie to comfort or protect their children. I couldn’t do that either.

When my second son was 6, he was fixated on death. Every night he called me in to his bedroom with yet another death-related question. How old will I be when Grandma dies? or How does it feel to be dead? One night he asked about the afterlife. Again. I had already told him that death was the end. You’re gone and it’s sad for those who miss you but it’s fine for you because your consciousness is gone too. But he was still looking for loopholes.

“We don’t actually know what happens after you die, right? I mean, you can’t talk to someone who’s dead, after all. There could be a Heaven.”

How the knowledge of our own mortality burns! How industriously we have cooked up metaphysical balms to salve that burn! Nonbeliever though I am, I could easily have reached into the cabinet of accepted wisdom and pulled out a quick balm for my child that night: “You’re right, sweetie. We don’t know for sure. There may be a Heaven.” That’s what a “maternal” mom would have done.

Yes, Heaven could be real, I conceded, but no more real than whatever he and I made up at that very minute for what happens after you die. All we know for sure is what happens to the body, so the idea that there’s anything else is just that: an idea. That someone made up.

Somehow, he managed to get to sleep.

The two solemn responsibilities of parenting—giving comfort and answering honestly—sometimes conflict. When that happens, “maternal” moms pick comfort over honesty. I pick honesty.

I pick honesty and the hope that, eventually, years of getting an honest answer from a mother who loves you will be its own sort of comfort. Maybe that unbending honesty feels like a hard surface to lean into when my children need something softer. But I hope it feels like a strong one, too.

My sister had her baby in March. His name is River and he’s beautiful and I promise not to tell him that Santa is just pretend. Because that’s not my job! Which means, I guess, that my father was right. My sister’s baby will make even me maternal because as his aunt, my core responsibilities will be to give him love and comfort and birthday presents. The end. It will be up to someone else to explain about death and sex and money and all the other difficult truths of human life.

I get to be maternal because I don’t have to be the mom.