The U.S. is intervening in yet another Middle Eastern country where extremist groups benefited from its policies 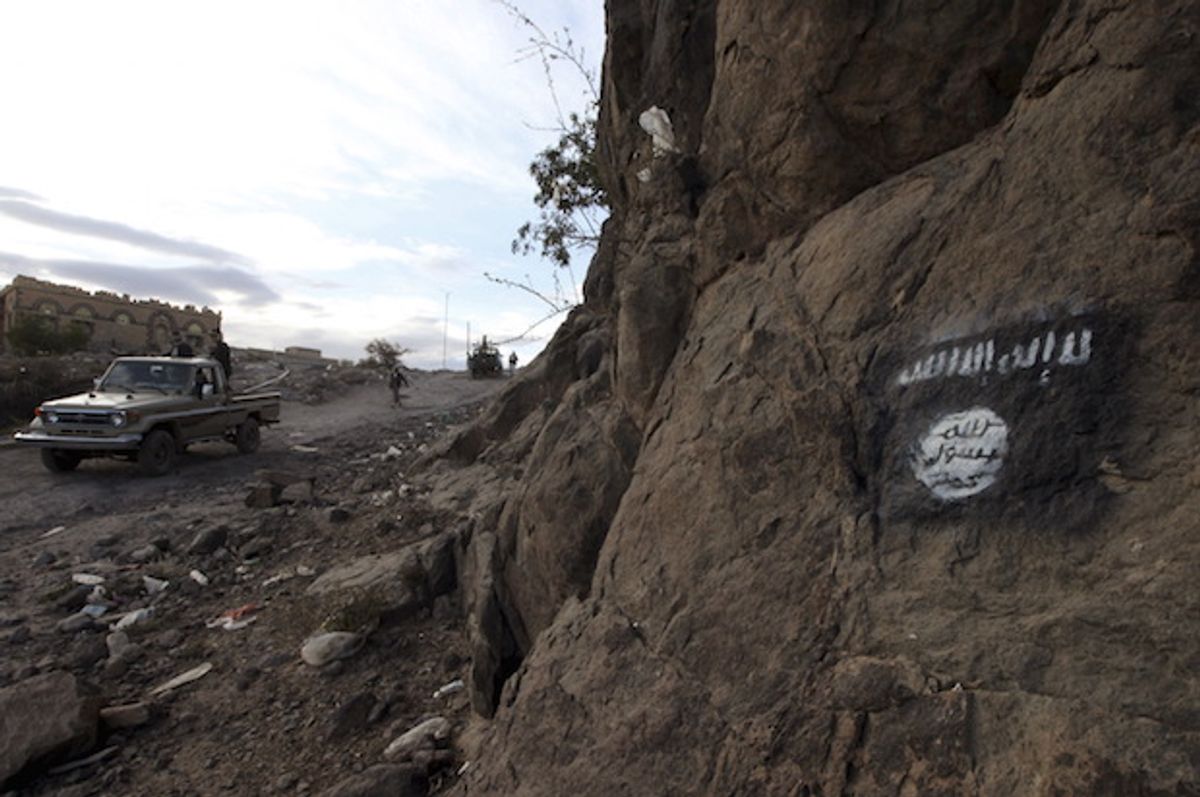 Houthi rebels drive a patrol truck past a flag of Ansar al-Sharia, the local wing of al-Qaeda in the Arabian Peninsula (AQAP) in Rada, Yemen on November 22, 2014 (Reuters/Mohamed al-Sayaghi)
--

The Obama administration has quietly deployed troops to help fight in Yemen over the past two weeks, with little public attention.

Yemen now joins a series of other Middle Eastern countries in which U.S. troops are on the ground without declaration of war and approval from Congress, combating extremist groups that have benefited from U.S. policies.

The military did not reveal until Friday, May 6, that it had sent troops to Yemen. The Pentagon refused to say what kind of forces it deployed or how many U.S. troops there are, only describing it as a "very small number."

The Pentagon says it is intervening to support its ally the United Arab Emirates, or UAE, in its fight against what is widely recognized to be al-Qaeda's most dangerous affiliate.

Yet the destructive Saudi-led war the U.S. has backed for more than a year is the reason al-Qaeda and other extremist groups have grown so quickly in the country.

In March 2015, a coalition of Western allies led by Saudi Arabia and armed and supported by the U.S. and U.K. began a brutal bombing campaign in Yemen, the poorest country in the Middle East.

Extremist groups like al-Qaeda and ISIS have exploited the chaos this war has created in order to grow.

As Salon has frequently reported over the past year, U.S. military officials as prominent as Secretary of Defense Ash Carter were warning as early as April 2015, just two weeks into the war, that al-Qaeda in the Arabian Peninsula, or AQAP, had “seized the opportunity of the disorder there and the collapse of the central government.”

Reuters published a report in April detailing how the U.S.-backed Saudi-led "war in Yemen has made al-Qaeda stronger — and richer."

A renowned journalist warned in a recent column that AQAP was the ultimate winner of the disastrous U.S.-backed Saudi war in Yemen, describing it as “Iraq all over again.”

Al-Qaeda has created what is effectively a mini-state on the south coast of Yemen, where it controls a 340-mile area in which it reigns over the local population and collects taxes.

AQAP is one of the most extreme branches of al-Qaeda. It took responsibility for the January 2015 attack on the Paris office of the magazine Charlie Hebdo.

ISIS has also capitalized on the chaos of the war and carved out its own territory in Yemen.

Almost exactly one year after the New York Times published the article "Al Qaeda Is Capitalizing on Yemen’s Disorder, U.S. Warns," the Obama administration deployed troops to fight the very same extremists who have benefited from its policies.

"U.S. counter-terrorism efforts have been undermined by Yemen's civil war," Reuters acknowledged in its report. "Prior to the Mukalla offensive, AQAP was estimated to have become more powerful than at any time in its history."

A Pentagon spokesperson told a news briefing on Friday that the U.S. forces in Yemen are filling a variety of roles, providing aerial refueling, security, intelligence, surveillance, reconnaissance, planning, medical support and more.

Pentagon spokesman Jeff Davis said "AQAP remains a significant security threat to the United States and to our regional partners and we welcome this effort to specifically remove AQAP from Mukalla and to degrade, disrupt and destroy AQAP in Yemen," Reuters reported.

Since April, Yemeni and Emirati troops have been fighting AQAP in the southern port city Mukalla.

The U.S. military has also deployed an assault ship and two destroyer ships off the coast of Yemen to provide support.

Emirati forces effectively invaded Yemen in 2015. The Western-backed coalition of which the UAE is a part hopes to restore the Saudi-backed government of President Abd Rabbuh Mansur Hadi, and is combating Yemeni Houthi rebels and militias loyal to former President Ali Abdullah Saleh.

In its report, AFP claimed the Houthi rebels are "Iran-backed," repeating an unsubstantiated myth much of the media has uncritically echoed for months. Investigative journalist Gareth Porter has debunked claims that the Houthis are armed by Iran.

Human rights organizations have accused the Saudi-led coalition of war crimes, and the U.N. says it is responsible for two-thirds of civilian casualties in Yemen.

More than 6,000 Yemenis have been killed, roughly half of whom were civilians, including nearly 1,000 children, in a very conservative estimate from the United Nations.

A U.N. report found that an average of six Yemeni children have been killed or injured every single day, for more than year.

The war has completely ravaged impoverished Yemen, pushing millions to the brink of famine. At least 14 million Yemenis, more than half of the population, face hunger, according to the U.N.

For more than nine months, humanitarian organizations have warned that more than 21 million Yemenis, 82 percent of the population — almost half of whom are children — need urgent humanitarian assistance.

Another at least 2.4 million people, 10 percent of the population, have been displaced

The U.S. and U.K. have done many billions of dollars of arms deals with the Saudi monarchy billions in recent years, selling many of the weapons that have been dropped on Yemeni civilians.

American and British military forces are providing intelligence and support to the Saudi-led coalition, and are physically in the command room with Saudi bombers, with access to a list of targets.

In early 2015, with war breaking out, the U.S. withdrew its military forces from Yemen, which had been deployed there to help fight what was then a much weaker AQAP.

The Pentagon also revealed on Friday that it had carried out at least four more bombings in Yemen since April 23, which it says were targeting AQAP.

For years, the U.S. has waged a secretive drone war in Yemen. Many scholars, journalists and even former military officials have warned that the little-acknowledged civilian casualties of the U.S. drone war has only fueled extremism in the region, not weakened it.

U.S. citizens Anwar al-Awlaki and his 16-year-old son Abdulrahman al-Awlaki were killed in CIA drone strikes in Yemen in 2011, extrajudicially assassinated without a trial.