Beyoncé speaks for herself: Stop demanding an artist be all things for all of her fans

Her decision to play N.C. instead of protesting HB2 sparked the latest round of calls for Bey to fit many molds 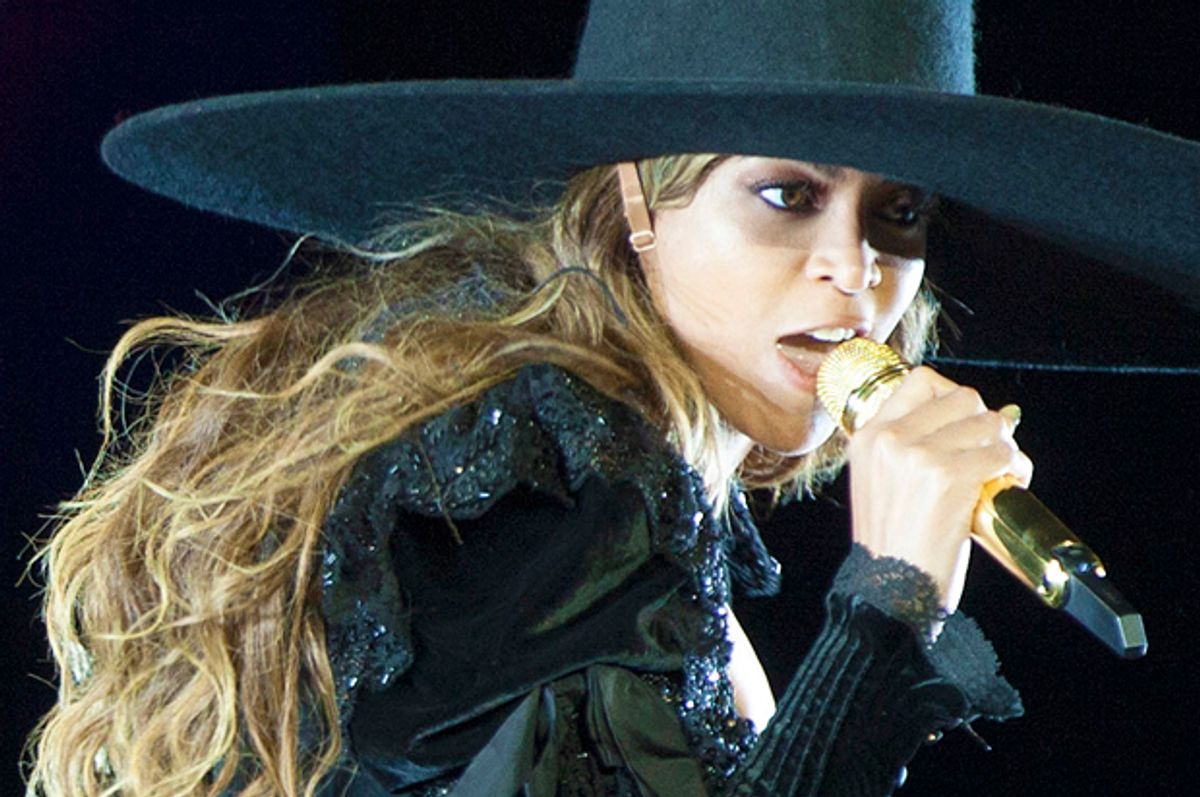 Was Beyoncé’s North Carolina protest too little too late? On Tuesday, the “Lemonade” singer performed in the state’s capital, Raleigh. In March, that city witnessed the passage of one of the harshest pieces of anti-LGBT legislation yet. House Bill 2, signed into law by Gov. Pat McCrory, repealed local nondiscrimination ordinances across the estate that offer protections on the basis of sexual orientation and gender identity in housing, employment, and public accommodations, including public bathrooms.

Although portions of that bill were amended, the state has not repealed provisions that force trans people to use the restroom that corresponds to the sex they were assigned at birth. In fact, North Carolina’s lawmakers have been defiant in the face of criticism from the Department of Justice, which recently stated that the bill violates federal law. The state has until Monday to respond to the DOJ statement, but it has reportedly refused to comply with that deadline.

Since that bill was passed, musicians like Bruce Springsteen and Ringo Starr have declared they would boycott the state; others, like 80s icon Cyndi Lauper, declared that the show would go on but pledged to donate profits to LGBT causes. Beyoncé, however, offered a more muted response: On her website, the singer posted a statement urging fans to donate to groups like Equality North Carolina, one of the LGBT non-profits working to repeal HB 2. However, its condemnation of HB 2 is measured and carefully worded, repeating the oft-used phrase “Y’all Means All” without a more thorough rebuke.

In a response for Vice, writer Allison Hussey pointed out that the statement was actually released during her North Carolina show, one in which she didn’t mention the legislation on stage. Hussey registered her disappointment that Beyoncé wasn’t more willing to take a stronger stand. “It is not enough,” Hussey writes. “Beyoncé’s statement barely even qualifies as Beyoncé’s statement—it’s passive and lukewarm PR fluff that feels like an afterthought, delivered at exactly a time where almost no one was paying attention.”

The fact that Hussey was underwhelmed that an icon she looks up to didn’t speak out more forcefully about the discrimination facing the LGBT community is understandable, but what’s so meaningful about Beyoncé’s activism is that it’s deeply particular and insular, rooted in the experience of being a black woman in America. Audiences want her impact to be universal and Beyoncé to speak to everyone’s struggle. That, unfortunately, is not her job as an artist. We do not own her or her message, and to hold her accountable to standing up for the LGBT community when she’s so busy fighting for marginalized voices across America is unreasonable.

This criticism is similar to those lobbied at her following the #BeyAHero campaign, a well-meaning but misguided hashtag which encouraged the singer to speak out against last November’s Houston Equal Rights Amendment (HERO). That ordinance, which would have provided equal access in public accommodations for trans people, as well as veterans and the elderly, was voted down by a 35-point margin. Its defeat followed a sadly successful campaign in which those opposed to the bill painted trans people as vicious “bathroom predators.”

In an essay for the Huffington Post, Carlos Maza urged Beyoncé to do her part to raise awareness about the ordinance and fight the dangerous myth that transgender folks pose a safety risk to anyone else in a public facility. Every single serious study on the subject has shown there are no reported instances of a trans person attacking someone else in a restroom.

“Over the past few months, Beyoncé has repeatedly refused the opportunity to speak out against the legalization of discrimination against LGBT people in her hometown,” Maza wrote. “And as hard as it is to say this, her refusal should raise serious questions about her support for her gay, bisexual and transgender fans. … A single post from her would have motivated young voters to the polls, focused national attention on the fight over HERO, and dramatically reframed the narrative away from the talking points of HERO’s opponents, who ended up saturating media coverage of the ordinance.”

In an essay for The Daily Beast, Arthur Chu (who is also a contributor to Salon) pointed out that the campaign unintentionally “[turned] a decision that was actually the fault of thousands of voters in Houston into somehow the fault of Queen Bey.” He wrote, “It’s frustrating that people project power onto celebrities that, in all honesty, they probably don’t really have.”

The beef that Maza and others had with Beyoncé, in part, stems from the singer’s often cautious stance when it comes to embracing the LGBT community. After Beyoncé’s 2013 self-titled visual album debuted, Slate’s Matt Capetola noted that queer people were noticeably left out of its message, especially in the video for “XO.” The love song features a multitude of couples engaging in PDA, but every single one of them is heterosexual. When speaking about her massive LGBT fan base, she told Flaunt in 2013 that she finds the adoration “flattering.” For some, the statement read as almost dismissive, the equivalent of saying: “Well, isn’t that nice.”

That criticism dismisses the important work the singer has done behind the scenes, including donating $6 million to a homeless youth center in Houston. But when it comes to Beyoncé, the struggle is that it’s very easy to project what we want onto her. If we want her to be a fierce LGBT advocate (look at her rainbow tribute to marriage equality!) or someone who has failed the community, it’s easy to cast her in either role—precisely because she says so little at all.

Beyoncé has always been incredibly guarded when it comes to her public image, whether it’s erasing unflattering photos of herself off the Internet following her 2014 Super Bowl performance or her cagey approach to giving interviews. When the singer appeared on the cover of Vogue, there was something notable missing from her appearance in the magazine: Beyoncé. According to the New York Times, the singer declined to do a sit down for the spread. “At some imperceptible point around 2013 to 2014, she appears to have stopped giving face-to-face interviews,” the Times’ Matthew Schneier notes.

Around that time, Beyoncé broke up with her father-manager, Mathew Knowles, as she began to take greater control of her famously guarded public image. She once claimed that this decision was inspired by the Material Girl herself. “I felt like I wanted to follow the footsteps of Madonna and be a powerhouse and have my own empire and show other women when you get to this point in your career you don’t have to go sign with someone else and share your money and your success—you do it yourself,” Beyoncé told Billboard during a 2013 appearance.

That is precisely what she has done in the years since: control the message. As Complex’s Karizza Sanchez argues, this is part of what makes her such a revolutionary figure. “Beyoncé has been the gatekeeper to her life, only providing what she wants and in the manner she wants to do it in—a rarity for even the biggest celebrities,” she writes. “It’s easy then, as a fan, to hate the veneer. But how could you not respect that power?”

This mantra also applies to her music itself. These days, Beyoncé releases her work completely on her own terms: She decides exactly when it is released (with little public warning), where it will be broadcast (“Lemonade” aired on HBO and streamed on Tidal), and precisely who it is for.

In the case of “Lemonade,” that work is very specifically rooted in black femininity, one that New York magazine’s Kat Ward argues is steeped in a “feminist spin on the traditional Southern Gothic tropes.”

As a pop-political figure, Beyoncé has always spoken through her music. When her recent performance of “Formation” caused controversy at this year Super Bowl, it was because of the number’s visual tribute to the Black Panthers. It was not her own statements on the subject of black power. That might frustrate those who are used to our celebrities being public and accessible, but as Chu argues, it’s precisely what has allowed her to be so effective: Her political neutrality means that the nagging backlash that has followed more outspoken black figures has eluded her.

In her pseudo-documentary "Life Is But a Dream," Beyoncé reminded her fans that she will never be ours, as much as we might want her to be. “My story has never been told—no one really knows who I am,” she said. That might continue to confound those who want her to adhere to our definition of what an icon and an activist should be, but it shouldn’t send her LGBT fanbase the message she isn’t listening. Beyoncé simply works in mysterious ways, like God herself.